How to Say “Excuse me” in Korean

Saying “excuse me” in Korean is more of an adventure than you might expect!

The phrase used depends on the situation, the speaker, and the listener. Once you consider these three factors, you will know how to say “excuse me” in Korean naturally. 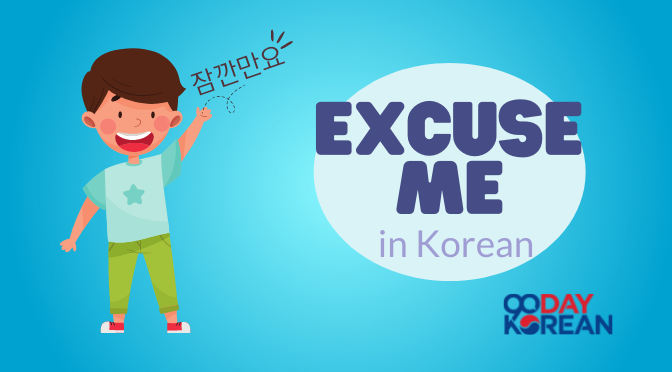 There are many ways to say “excuse me” in Korean. To know which one is the best to use in any given situation, it is important that you listen and observe Korean life to get a feeling of how different words are used.

We also have a free PDF guide that you can take with you on the go. Check it out below:

How Do You Say “Excuse Me” in Korean?

You can watch our video on How to Say “Excuse Me” in Korean before going into the article:

How to Say EXCUSE ME in Korean | 90 Day Korean

Formal “Excuse Me” in Korean

There are many ways to express “excuse me” in Korean. One way to say it in Korean is to express it using the formal version. It’s important to learn this version so you can show respect and be polite to anyone you say this phrase.

This word is used when trying to get somebody’s attention and is very polite and formal. If in doubt, use 실례합니다 (sillyehamnida)because even if you are wrong, at least you aren’t being rude. You can use this word if you want to approach a stranger on the street, for example, if you need to ask for directions. Excuse me, do you happen to know where the bathroom is?

To remember this phrase just imagine that to approach strangers in a street (or formal settings) you need your silly ham (pig) to say excuse me for you. Your pig is wearing a suit so you know it’s formal. 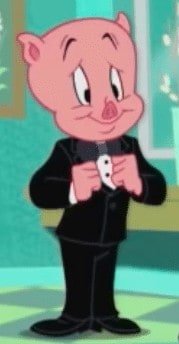 Standard “Excuse Me” in Korean

There are two standard Korean expressions you can use when saying “excuse me.” Both of these are polite so you can it’s safe to you use them for anyone regardless of age.

This Korean word means “wait a moment” but is sometimes used to mean “excuse me.”  It should be used if you need somebody to move out of your way. 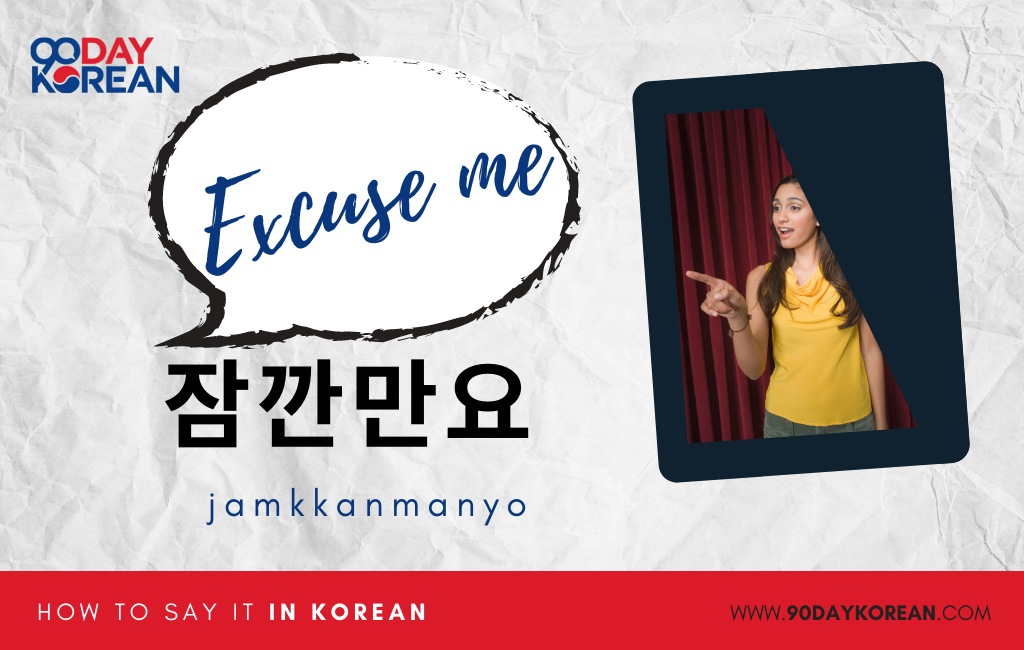 As a cultural note, you will probably notice that people often push past others without saying anything. Saying “excuse me” is far less common in Korea than it is in other countries.

Like 잠깐만요 (jamkkanmanyo),  잠시만요 (jamsimanyo) is also used to say “wait a moment” but is sometimes used to mean “excuse me”.  For example, you might use the word if you are on a subway and need people to step aside so you can get through. Although both 잠깐만요 (jamkkanmanyo) and 잠시만요 (jamsimanyo) are used to say “excuse me,” especially when passing through a crowd, they are not widely utilized because people frequently push past others without saying anything.

However, if you want to show good manners then use one of these two words when pushing past somebody. If you need to choose, use 잠시만요 (jamsimanyo) as it sounds less rude when said to strangers.

Both these words are quite useful, so we recommend learning them shortly after you know basic Korean greetings.

You can shout either 여기요 (yeogiyo) or 저기요 (jeogiyo)  when trying to get somebody’s attention. An example of when to use this would be with the waiter in a restaurant.

For remembering the common phrase 여기요 (yeogiyo), just think of the cartoon character Yogi Bear in a restaurant asking for the waiter with a “yo!“.  Remember, the sillier the associations you make, the more likely you are to recall them.

Rather than shouting out 여기요 (yeogiyo), you might hear somebody using a person’s titles in order to call somebody or grab their attention.

The word you use depends on the other person’s gender and age compared to you. It might feel a bit strange at first shouting 이모 (imo | literally meaning “aunt”) across the room, but if you feel confident then give it a go.

When addressing females, guess low when judging their age so as to not cause offense. These words are useful when you need to get the attention of somebody who isn’t in a restaurant, for example, a bus driver.

Bus driver, can you open the door, please?

If you want to use these kinds of words, follow the usage guide below:

이모 = imo | older woman who you are close to

Informal “Excuse Me” in Korean

The informal “excuse me” in Korean is the same as the standard versions, except without the 요 (yo) at the end. Make sure you’re using this with people you are close to and who are lower in the social hierarchy than you are.

This informal version means the same as the standard version 잠깐만요 (jamkkanmanyo). It means “wait a moment” or “excuse me.” But you won’t use this for people who are older than you, someone who holds a higher position than you, or even for strangers.

You can use this version for people who you have a close relationship with such as friends or to people younger than you. 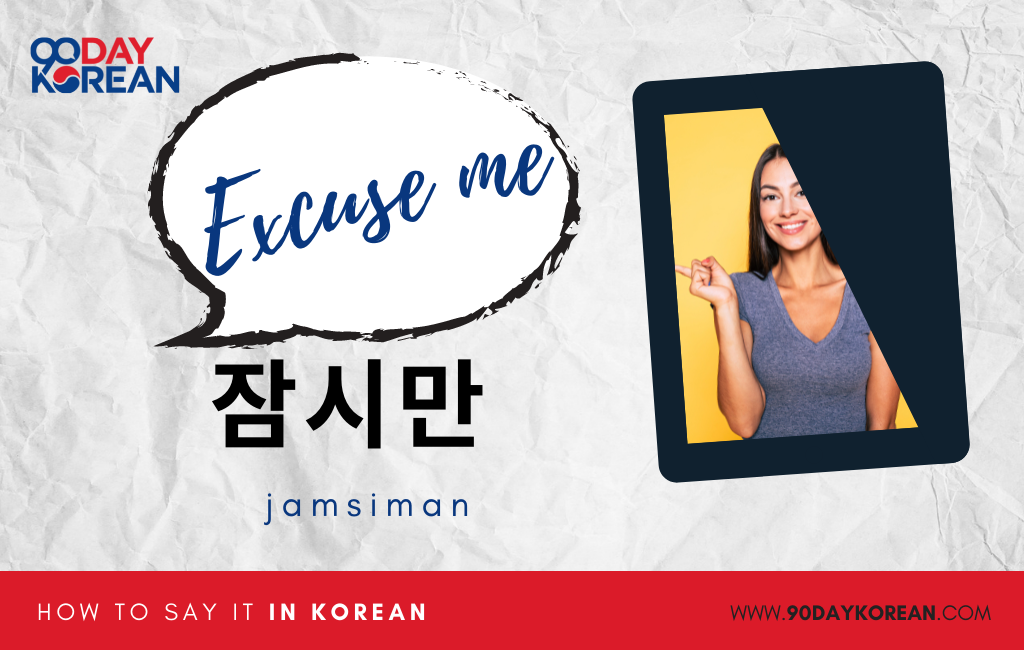 Excuse me in Korean – To Ask A Favor

In situations where you could potentially replace excuse me with “sorry”, then you can say 죄송합니다 (joesonghamnida).

Sorry can be used in situations when you need to ask for a favor (such as asking for a picture to be taken) and would most likely be translated in English as “Excuse Me” in these situations. Read our guide to How to Say ‘I’m Sorry’ in Korean for more details.

You can also check out our Korean Phrases list of everything you need and level up your Korean skills!

There are many different ways of saying “Excuse me”. The best way to learn how to say “excuse me” in Korean correctly is to listen and observe how Koreans use these words. Then, try to copy them.

Now’s a great time to “excuse” yourself and practice this expression.

Interested to learn more about Korean? We have an awesome structured course that can help you learn Korean fast. Have a 3-minute Korean conversation in just 90 Days! Know more about it here.