Are you curious about the Korean language? Or maybe you want to know the difference between how people speak in South Korea and North Korea? You’ve come to the right place!

Apart from learning facts about Korea and Korean culture, it’s also good to know some important information about Korea’s language.

We’re going to cover everything you need to know about Korean. We’ll also include some resources you can put into practice if you decide you want to learn the language, or just know how to speak Korean for a trip out to the Korean Peninsula. 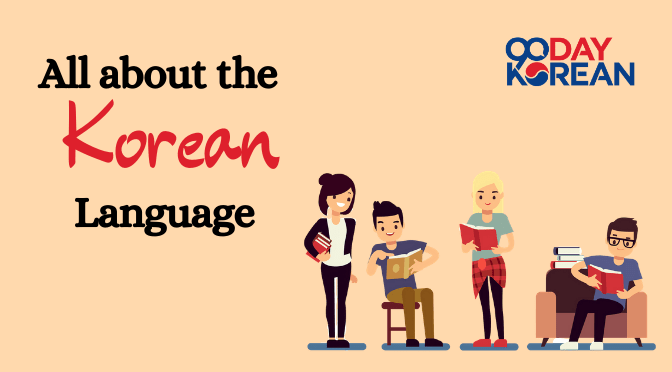 The word “Korean” can refer to the Korean language or a Korean person.

The word “Koreans” means “Korean people”. However, it can have a slightly different meaning depending on where the person was born.

A Korean is someone who was born in North Korea or South Korea. Both 한국인 (hangugin) or 한국 사람 (hanguk saram) mean “Korean person”.

Koreans born outside of Korea

Overseas Koreans are called 교포 (gyopo).  If you want to specifically refer to a country that an overseas Korean is born in, you’d use the Korean + country.

For example, a Korean American would be 한국계 미국인 (hangukgye migugin). That translates to “Korean American”. The 계 (gye) added to the end of 한국 (hanguk) means “of that country’s decent”.

The word “Korean” can refer to the language, people, or an aspect of the culture. Typically when people say Korean, they are referring to South Koreans. However, Korean can also refer to anything in the Korean peninsula and its history.

Is Korean a language?

Korean has its own language family called Koreanic. The Koreanic language consists of mainland Korean plus the dialect on Jeju Island. There are many dialects in Korean such as the Seoul dialect, and Jeju is the most significantly different.

The Korean taught in classrooms and used by Koreans today was formed a few hundred years ago. Before that, older versions of the language were used.

How many people speak Korean?

Korean is spoken by more than 75 million people worldwide. The majority of the speakers live in South and North Korea, where it is the official language.

Outside of the Korean peninsula, the cities with the most Koreans in them are Beijing, Los Angeles, New York, Tokyo, Osaka, Atlanta, and Sydney. The United States, China, and Japan have the largest total number of Korean speakers. 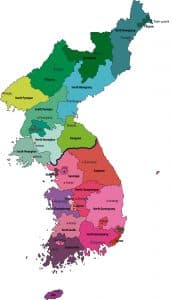 Both North and South Korea use the same language so they don’t have difficulty understanding one another. However, both countries have distinct accents. North Korea’s accent is stronger than the south’s.

Though the two countries can understand each other’s languages, it’s easy for them to identify each other. Someone may be identified as North Korean just by their accent.

Besides the Korean peninsula, there are many native Korean speakers living abroad. The regions with the biggest Korean populations are the United States, China, Japan, Canada, Uzbekistan, Vietnam, Russia, Australia, and Kazakhstan.

How many languages are spoken in South Korea?

There is one official language spoken in South Korea, with five different dialects. Seoul dialect is the standard version that is used in speeches and used on news reports.

Some other commonly spoken languages in South Korea are English, Japanese, Chinese, and Russian.

What language is Korean most similar to?

Many words in Korean have Chinese origin, so in that way, Korean and Chinese languages are similar. However, there are no tones in Korean like there are in Chinese.

Some modern-day newer Korean words, sometimes called Konglish, are adapted from languages such as English and German.

What type of language is Korean?

Korean is a phonetic language, meaning that you can sound out the individual letters to make words. It has an alphabet with individual sounds for each letter, and the letters are read from left to right and top to bottom. There are individual syllables. Many native English speakers can learn the alphabet (Hangul) in about 1-2 hours.

The South Korean language is called and widely known as 한국어 (hangugeo). This is the language most Korean learners are learning.

The other language used in the Korean peninsula is the North Korean language. This is called 문화어 (munhwaeo).

Korean is the official language of South Korea and has a few organizations that support it.

The National Institute of Korean Language helps to improve the Korean language. It does this by doing research and creating Korean language policies for the correct usage. They provide a useful dictionary that also has audio.

Test of Proficiency in Korean (TOPIK)

The official test of the Korean language is the TOPIK. This test is often required to work at Korean companies or to obtain a visa in Korea.

History of the Korean language

Some claim that the various groups of people occupying the Korean peninsula eventually became one, forming a single language. This likely happened during the unification period in the 6th to 14th century. And in the 15th century, the modern Korean language we all know was formed.

Chinese characters were introduced to the region in the first century BC. They were adapted to the language and became known as Hanja (한자). It was used as a means of writing Korean.

These Chinese characters were officially used in Korea until just 100 years ago, when Hangul, the Korean alphabet, finally became popular as the writing system. Even today, you can still see some Hanja used by South Koreans, especially in official documents.

In North Korea, however, Hanja has officially not been used since 1949. Many words borrowed from Chinese have been replaced with native Korean words by North Koreans. The Chinese loan words are still used in and are written in Hangul now. You can find Hanja in special situations such as dictionaries.

The Hangul system was created by King Sejong in 1443. In North Korea, it’s called Joseongul. It became the most important writing system in both North and South Korea after World War 2 and the Korean War.

There are 14 consonants and 10 vowels in the Hangul (also spelled “Hangeul”) writing system.  These are then combined into blocks to form words. Writing the basic Korean letters is fairly simple. Many of the letters in the alphabet are only a single line or two.

One convenient aspect of the writing system is that many of the letters in the alphabet have similar equivalent sounds in English. That makes it to learn the letters and sounds fairly easily. Many people can learn basic Hangul in about 1 hour.

History of Korean language and literature 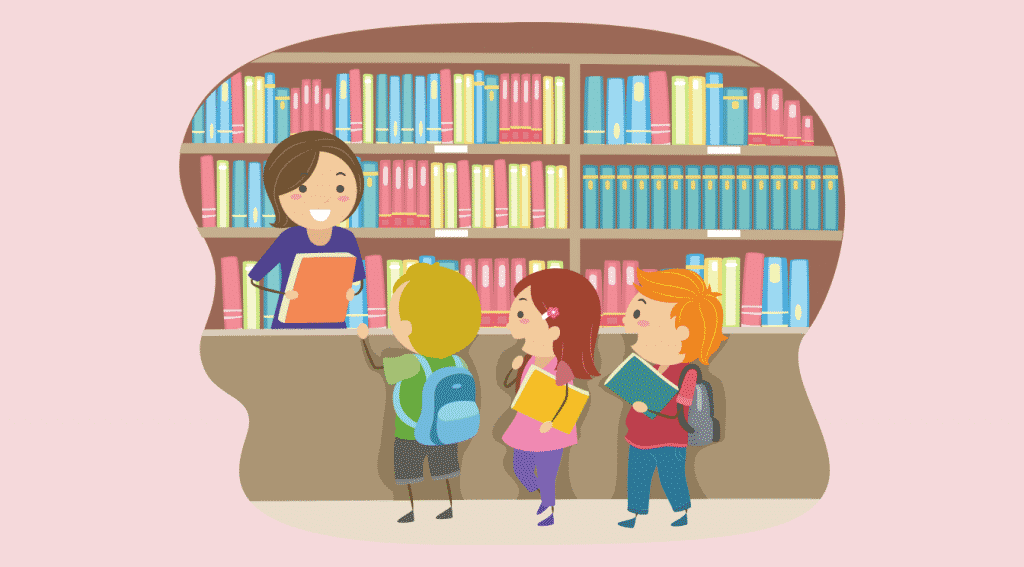 The first form of poetry was discovered during Silla Dynasty (57 BC – 935 AD). However, the form of poetry that has best lasted until nearly the modern days, called sijo, was created during Joseon Dynasty (1392–1897). The first written historical records, and thus the birth of prose in Korea, date back to Goryo Dynasty (918–1392). All in all, Korean literature’s origins can be traced all the way back to Old Stone Age.

How to Speak Korean

You can learn to speak Korean without learning Hangeul (the Korean Alphabet). However, it will be much easier and faster if you first learn the alphabet. You will be able to pronounce words more accurately and understand what you hear more easily.

Does the Korean language have tones?

No, Korean doesn’t have tones like Chinese. If you can read Hangul, it’s easy to pronounce Korean words. That’s because most of them are written the same way as they are pronounced.

There are some exceptions, but overall the pronunciation rules of the language are very simple and clear. You will not find tones in standard Korean, so getting started with speaking is quite effortless.

Korean can be written in English letters following an official romanization system. It’s useful for approximating words into English, but it’s not good for pronunciation.

How to Learn Korean

The best way to learn Korean is to learn some basic grammar and phrases and start interacting with people in Korean.

The basic word order for Korean sentences is subject-object-verb. However, the word order for Korean is flexible and the verb is often the only word you need for the sentence to make sense. Thanks to this, it’s easy to start creating sentences right away for beginners who want to practice the language. If you wish to start learning the grammar today, start with our guide on Korean grammar for beginners.

There are nine parts of speech in the language. These parts are nouns, pronouns, numbers, action verbs, adverbs, descriptive verbs and adjectives, interjections and exclamations, particles and postpositions, and, lastly, determiners, and indeclinable adjectives. If you know Japanese, you may recognize similarities in the grammar structure to Korean.

What are Korean honorifics?

Korean uses honorifics and speech levels to show the relationship between the speaker and who they’re speaking to or speaking of. Speakers need honorifics when talking of someone with higher status or older age. For example, you would make use of honorifics if you are talking about or to your parents.

Additionally, there is a neutral speech level which is used by speakers in general situations. This speech level may be used with people who are similar age and status to you but not a close friend (Note that Korean age is different than international age).

Does the Korean language have genders?

Technically, there is no gender in Korean grammar. This means words are not categorized separately, as in French, for example. And because you only need a verb in your sentence, you don’t need to write “he” or “she” in your sentence as you would in English.

However, by using 그 (geu) for a man and 그녀 (geunyeo) for a woman in your speech or text, you can make it clear whether you are talking about a man or a woman. Additionally, Korean vocabulary owns a lot of words that are specific to gender such as 오빠 (oppa) for men, meaning big brother, and 언니 (eonni) for women, meaning big sister, or other familial titles that are specific to a gender.

There are many words that were adapted from Chinese characters. The exact amount of these words in Korean vocabulary is not known, but estimations vary from as low as 30% to as high as 65%. A few of the basic vocabulary you’ve already learned in Korean may have originated from Chinese words.

In addition to these words, as well as the previously mentioned loan words from English and Russian, the language has been borrowed from other languages. For example, there are some parts of the vocabulary that come from Mongolian. And then there are some new words that were adapted from the Japanese language, which in turn originated from German.

This has led to additional differences in vocabularies used in the South and in the North. North Korea has tried to implement as many native Korean words into daily practice as possible, decreasing the number of words taken from the Chinese language.

Thus, there are some popular vocabularies used in the North that do not exist in the South, and vice versa. Over the years the two main dialects of Korean have developed differences in pronunciation, spelling, and grammar.

That wraps it up for our write-up on Korean. Hopefully, you’ve enjoyed this and know a bit more about the language and culture. If you want to learn more, we’ve got some fantastic resources on things such as Korean slang, Korean phrases, and Korean numbers that you can put into action right away.

We also have a structured online Korean course that will teach you how to have a 3-minute conversation in the first 90 days.

Is there anything else that you’re curious about? Please let us know in the comments below!