You may be new to the concept, but particles are a part of the Korean language used every day. These Korean particles are found in nearly every sentence you’ll hear, if not all!

But it’s essential to learn how to use them correctly. We’ll cover Korean particles for everyday use that you should learn to become a competent Korean speaker. 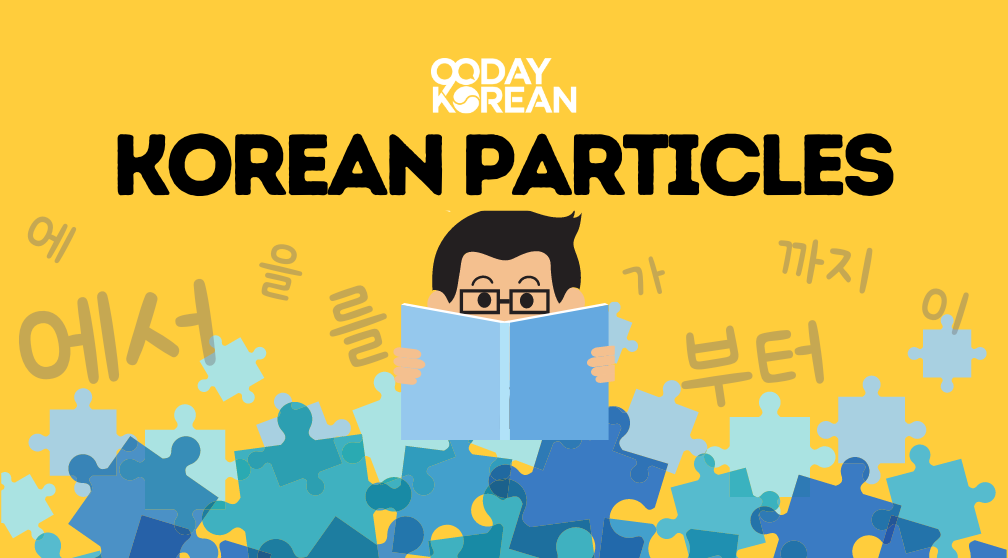 Here is a free PDF guide that you can download and take with you:

We will get into some of the most important parts of Korean grammar that you’ll use regularly. If you don’t know how to read in Hangeul yet, then you can learn Korean here in under an hour. For some helpful resources on a Korean language study plan, go here.

What are Korean Particles?

Korean particles mainly function as markers in a sentence. These words help identify what a certain word’s role is in the sentence (whether it’s the topic or the object), and it also helps connect words to give a clearer meaning to what you want to say.

Korean particles may come off as confusing initially, but these are essential in building sentences, which you’ll learn with enough practice!

There are a great number of particles in the Korean language. However, you don’t need to know all of them immediately. You’ll only need the most common particles to get started.

Now that you have some idea of what Korean particles are, let’s learn more about the specific particles and their different uses.

There are two Korean topic markers used in sentences. They function the same but are used depending on the last letter of the word that precedes them. We’ll learn all about them below.

1. The ~은/는 (~eun / neun) markers are used to mark the topic in the sentence which is what you are going to talk about. These markers have the same meaning as “regarding ~” or “as for ~.”

You can use the topic marker 은 (eun) when the last syllable of the preceding noun ends in a consonant and the topic particle 는 (neun) when it ends in a vowel.

나는 학생이에요 → I am a student

나는 행복해요 → I am happy

The difference between the two is that 이 (i) is a subject marking particle used when the preceding noun ends in a consonant, while the subject particle 가 (ga) is used when it ends in a vowel.

Sample sentences for each subject particle:

내가 주문을 할게요 → I will place the order. 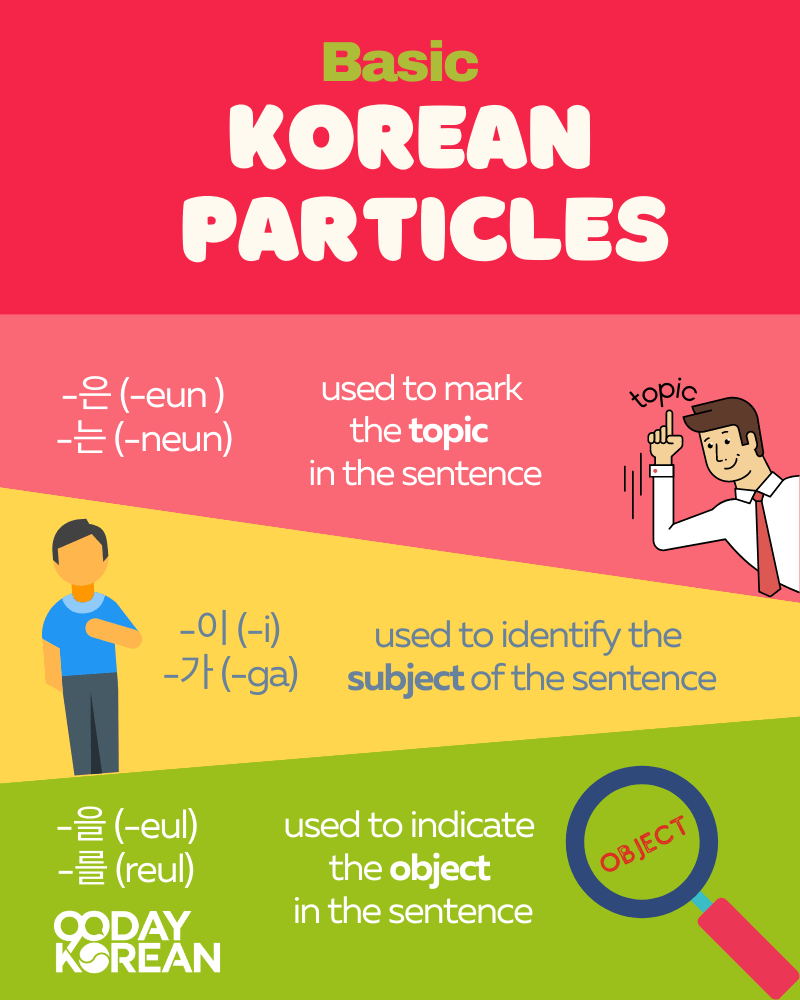 Why are these so tricky? Both of them are used to indicate the subject in the sentence, making them almost the same in use, which can cause confusion. When creating sentences, you should be careful which one you’ll use, unless it doesn’t matter in that particular sentence. With practice, you’ll get the hang of them!

As mentioned above, in many cases, you can use the particles ~이/가 (~i / ga) and ~은/는 (~eun / neun) interchangeably. With time, as you begin to learn and speak Korea, you’ll be able to differentiate between the two just by noticing how each sentence sounds, but it’s still good to focus on how they are different.

Here are the differences between the subject marking particles ~이/가 and topic markers ~은/는 explained with a few examples.

1. ~은/는 is used to state a general fact. while ~이/가 is used for specific ones.

Sample sentences for both topic marking particle and subject particle:

2. ~이/가 is used when introducing new information. After the subject has been declared and known to those involved in the conversation (became a topic),  은/는 (eun / neun) is often used.

화장실은 엘레베이터 옆에 있어요. →The toilet is next to the elevator.

Here is some additional information to explain the difference between ~은/는 (~eun / neun) and ~이/가 (~i / ga):

But remember, this isn’t always the case. It’ll become easier with practice. This example below shows both ~은/는 (~eun / neun) and ~이/가 (~i / ga) concept in a sentence:

*Note: In this example, Korean food is a topic and Bibimbap is a subject.

주말에 친구와 영화를 볼 거예요. → I’m going to watch a movie with my friend on the weekend.

Notice the subject marking particles in the above example? Multiple types of particles often come into play in a single sentence.

There are five Korean location particles. All of them help indicate the location in sentences. They can emphasize the place where the subject is going, where action has or is taking place, and direction or movement.

Some of the Korean location particles can also be used to express time.

In this section, you’ll learn about how each of the Korean location particles functions.

저는 학교에 있어요 → I am at school

You’ll need to get used to understanding the use of particles (and also different vocabulary) based on the context of the sentence. In the above sentence, you can recognize the two separate uses of 에 (e) based on the words it’s used with, 월요일 (wollyoil | Monday) and 부산 (Busan).

Although ~에서 (~ eseo) also indicates location, its use is quite different from ~에 (~ e). When you use ~에서 (~ eseo), you are stressing the location you are doing or did something in, excluding when the verb of the sentence is 있다 (itda), in which case 에 (e) is used.

You can also take advantage of ~에서 (~ eseo) when describing how something is like somewhere. For example:

Note the nuance of how the location is stressed when using 에서 (eseo). 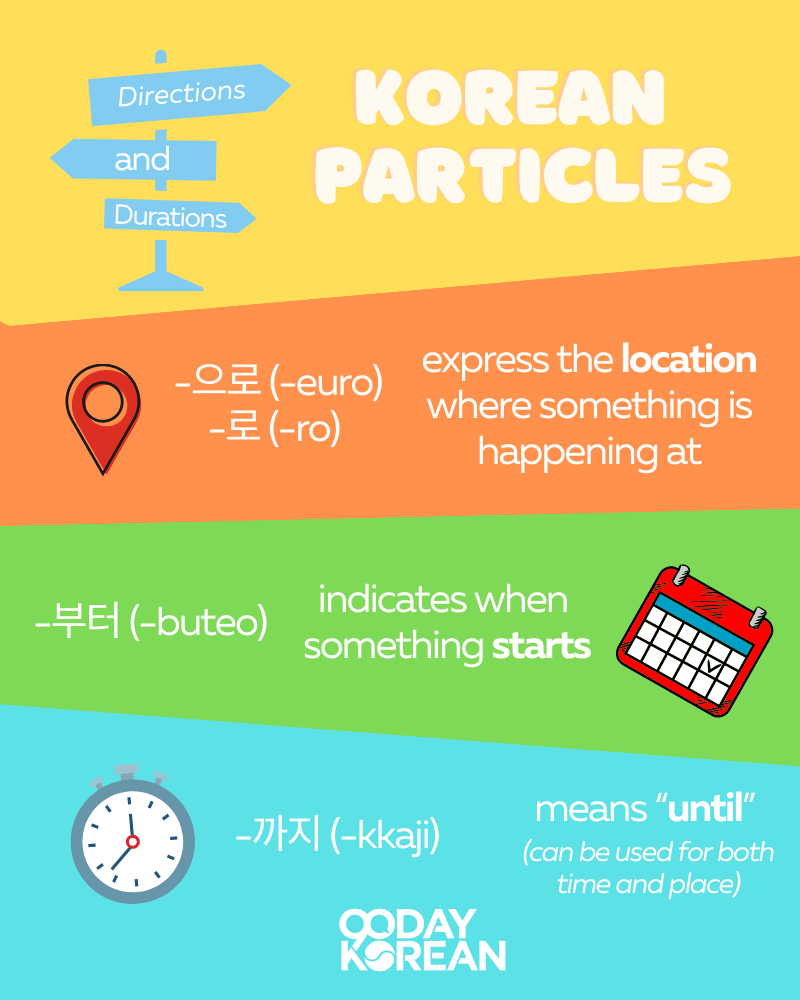 ~으로/로 (~euro/ro) is a multi-functional particle. For starters, you can use it to express the location where something is happening, making its meaning similar to ~에 (~ e).

You can also use it to express the tool, method, language, and so on that something is being done. For example:

You can even use this particle to express what you ate for a specific meal. For example:

By attaching ~(으)로 (~(eu)ro) to 쪽 (jjok) you will create the meaning “the direction of_”. You can attach 쪽 (jjok) with Korean nouns and also some direction words. For example:

The most common use for ~부터 (~buteo) is to indicate when something starts.

~부터 (~buteo) can also be used in a similar fashion to ~에서 (~ eseo) where the difference is more so in the nuance of the sentence rather than the meaning. It is usually reserved for Korean sentences where you would include ~까지 (~ kkaji) in its structure. For example:

Lastly, you can attach the word 처음 (cheoeum), which means “first”, to ~부터 (~ buteo) to express “from the start”. For example:

~까지 typically means “end,” more specifically “until,” and it works for both time and place. You can also use it to mean “to,” often used together with ~에서 (~ eseo), although the use of ~에서 (~eseo) isn’t always necessary and ~까지 (~ kkaji) on its own will remain clear in its meaning.

If you wish to combine ~까지 (~ kkaji) with the previously mentioned 처음부터 (cheoeumbuteo) to express “from start to finish”, the word to attach to ~까지 (~ kkaji) becomes 끝 (kkeut), which means “end”. 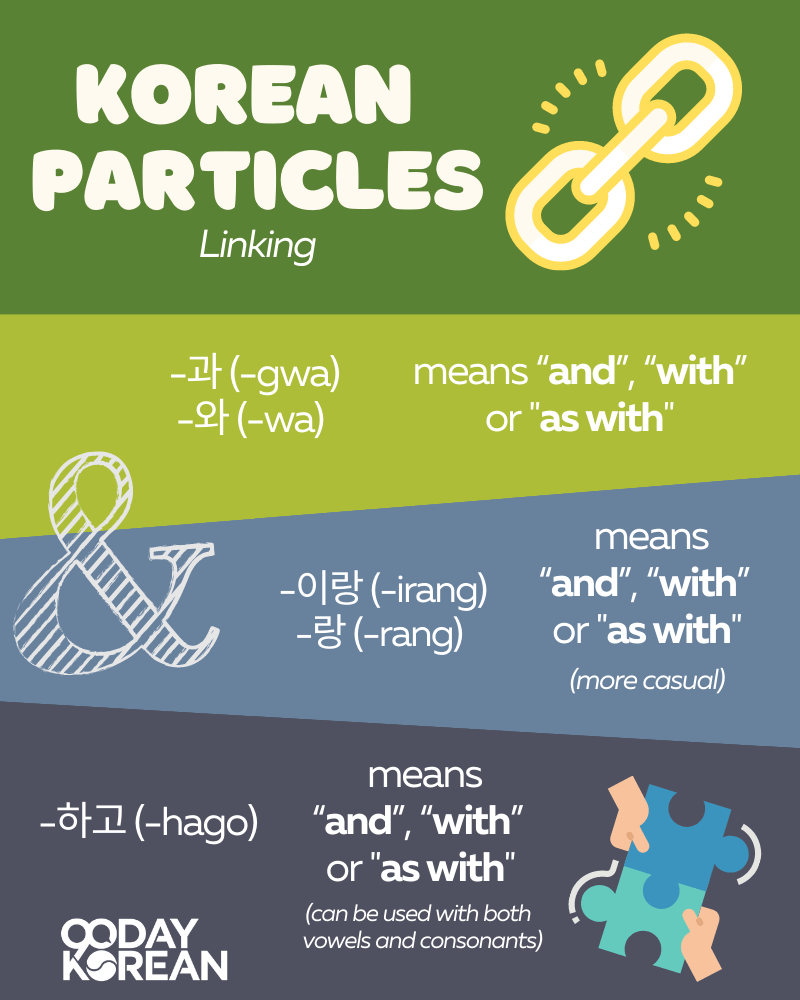 There are four Korean linking particles that can be used to connect two or more ideas. Two out of the four linking particles have two variations. Their usage depends on the last letter of the word before them.

This particle is nearly identical in use with ~과/와 (~gwa/wa). You should attach ~이랑 (irang) with a syllable ending in a consonant and ~랑 (rang) with one ending in a vowel. The main difference between these and ~과/와 (~gwa/wa) is that ~이랑/랑 (~irang/rang) is more casual to use and is also more common to hear spoken than to see in text.

~하고 (hago) is another particle meaning “and” and “with”. It can be used with both vowels and consonants.

The ~고 (~ go) is a connective particle mainly used to connect two actions, happening one after another, into one sentence, attached either to an action verb or a descriptive verb.

You can also use this particle to connect two adjectives describing the same topic or two sentences describing a similar topic into one sentence.

And yes, you can also use the ~고 particle together with the past tense!

There’s only one Korean plural particle added to nouns in a sentence that would make them plural. It is the particle 들 (deul).

The marker 들 (deul) indicates a plural form. However, it is solely used as a marker when talking about people (it’d be weird to use it with a noun like a fruit). In fact, apart from people, it is not that common to use a plural form and isn’t totally necessary to use with people, either. In the cases you would want to indicate plural, check out the examples.

오늘 친구들을 만나요 → Today I will meet with my friends

When Koreans talk to you in Korean, you may notice that they omit this particle. This is common in a Korean language conversation.

It is possible to add the possessive form, which we will introduce to you soon.

This marker is used to express the word “only,” and it is attached to nouns.

Fairly straightforward, the ~의 (~ ui) particle indicates possession. This possessive particle is attached to the person who possesses the object, similarly to ‘s in English.

In the case of “my,” specifically when using the more casual 나(na), you can shorten from 나의 (naui) to 내 (nae). Like this:

These forms all indicate you are giving someone something.

오빠한테 돈을 빌려줬어 → I lent money to my big brother

The difference between each one is simply their level of politeness. 께 (kke) is of honorific level, 에게 (ege) is formal polite form, and 한테 (hante) is informal and casual. You can read more about Korean honorifics here.

These markers possess the same level of politeness as their counterparts above. Technically you do not need the ~서(~seo) attached to the end to make the meaning clear, but it’s good to keep for differentiation when you’re still a new learner of Korean.

~도 (~do) indicates the use of the additive principle in the form of “too” and “also.” You can drop ~은/는 (~ eun / neun) or other particles when using the additive particle ~도 (~do).

나도 영국사람이에요 → I am also from England

Phew! That was quite the lesson, don’t you think? As you learn Korean, learning the particles will significantly improve your knowledge of Korean grammar which will make you more confident with talking to native speakers!

How many Korean particles discussed did you already know and which were brand new to you? Try to make some of your own Korean sentences in the comments, and we’ll check them for you. We’d love to see them! In addition, to help you speak Korean and build a Korean sentence, we have a list of English words translated into Korean here.

If you want to learn Korean, we have the Inner Circle web program that will teach you how to have a 3-minute conversation in the first 90 days.