Weird Korean Food – Unusual Dishes That Might Surprise You

Have you heard of the wonderfully weird Korean food out there?

If not, your taste buds are in for a treat! 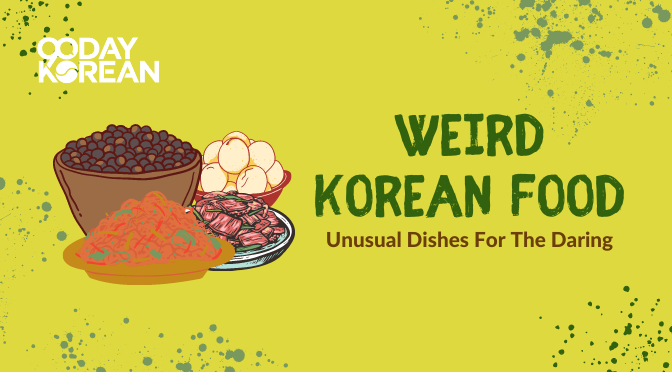 Our recommendations might not be the best-looking foods for others. In fact, some describe them as strange, exotic, or even funny foods, but one thing is certain: these are delicious and amazing delicacies that you must taste at least once in your life!

If you are looking for some new Korean vocabulary, we will also include the Korean names of each food to order if you go to a restaurant. This is a good chance to boost your Korean language skills as you learn about these different kinds of unusual food in Korea.

The delicious foods we recommend are all written in Hangul (한글), the official writing system for South Korea. If you’d like to learn more about Hangul (한글), you might find our online structured courses helpful. Learn Korean in just 90 days! Know more about it here.

Today we are going to discuss some dishes truly unique to Korea! Some are loved, and some are loathed, but one thing is for sure—they definitely do stand out. Korean culture is known for its food, but these dishes are on another level.

If you’re feeling brave, daring, and adventurous, then you might want to try these ten weird Korean food dishes for the daring.

This is a popular snack food in Korea that you can get from street vendors or serve drinks at some restaurants. If you haven’t tried street food before, Korea is a good place to start.

The silkworm is first seasoned and then boiled or steamed. Beondaegi have a somewhat soft and crunchy texture and are served in a paper cup on the street or in a bowl at restaurants. 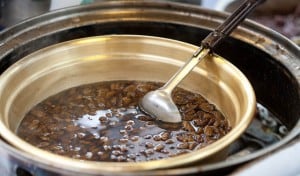 If you’re dying to taste the home version of this wonderfully weird Korean food, we have great news for you! Beondaegi can also be bought in sealed cans to experience delight anytime you get a craving.

These are packed with protein for all fitness people, so grab a can after your next workout!

Jokbal is a beloved dish in South Korea made up of boiled pigs’ feet cooked with leeks, soy sauce, ginger, sugar, and rice wine. The feet are deboned, cut into slices, and served on a large platter. 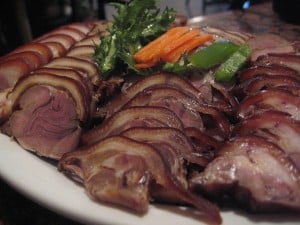 To eat, first, grab a piece of lettuce. Next, wrap a slice of jokbal in the lettuce. Finally, add your choice of sauces, veggies, and other little goodies, and you’re all set!

Jokbal is said to be good for your skin and for hangovers, which works out well since it’s usually eaten alongside alcoholic beverages.

While it may seem like weird Korean food, it’s one of the more tame dishes. If you like Korean BBQ, then there’s a good chance you’ll like the taste of this one.

If you are looking for the real deal, be sure to check out Jokbal Alley in Seoul (장충동 족발골목| jangchungdong jokbalgolmok), which is chock full o’ jokbal spots.

While we’re on the topic of feet, let’s not leave our little fine-feathered friends out of this one! While some of the foods on this menu may not resemble the corresponding animal you are eating, dakbal is the exception. Please make no mistake; you will know they are chicken feet!

The feet are cooked and seasoned with sesame and red pepper paste. Keep a pitcher of water or other beverage of your choice nearby because the spicy sauce is really something! Korea is known for its spicy foods, so there are plenty more spicy dishes to try if you like them!

To help remember this word, 닭 (dak) means chicken, and 발 (bal) means foot. Look for these words on signs next time you’re out in Korea or a Korean restaurant area.

Due to overfishing and low reproductive rates in recent years, skate has become an expensive delicacy in South Korea. Skates are similar to stingrays. You probably wouldn’t be able to tell them apart if you saw two next to each other.

As far as adventurous foods go, this one may be the winner. Hongeo is famous for its ammonia-like odor and the ability to make your eyes and mouth water simultaneously. Raw fermented skate is served with various side dishes and is most common in the southern part of Korea.

Head over to your favorite fish and seafood market to try this out. You can use the word 홍어 (Hongeo) skate to order. Bon appetit! 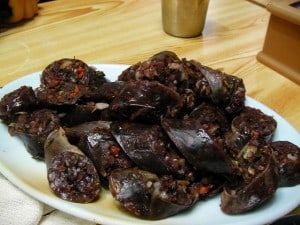 First, let’s address the pronunciation. While the word for this dish may look like the delicious dessert item, the “ice cream sundae,” it’s actually pronounced like “soon” + “day.” Now that we can say it let’s figure out what it is!

Also known as blood sausage, the sundae is boiled or steamed cow or pig intestines seasoned with various ingredients and then packed together in sausage-like form. It’s often one of the most popular foods at street vendors in South Korea. 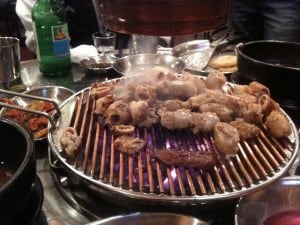 If you need a new dish to compliment a soju-infused night on the town, then you may want to consider gopchang.

Prepared in true BBQ style, you’ll sit at a round table with a grill in the middle and be served a dish of seasoned grilled intestines ready to be cooked up.

If you forgot to work out that day, not to worry —gopchang’s chewiness will certainly give your jaw muscles a little bit of a workout! Gopchang’s companions are typically onions, garlic, green onions, mushrooms, hot peppers, and various kinds of sauce. 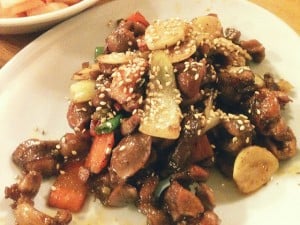 Looking for food that will help keep your skin looking healthy? Then you might want to look into some dak dong jip. This popular dish has a reputation in Korea for contributing to healthy skin.

Made from the thick, muscular walls of the chicken’s digestive tract, this chewy delight is also known to cure hangovers. Doubly good!

The dog meat is prepared and boiled with various vegetables and spices, including green onions and perilla leaves. Although not as popular with the younger generation, bosintang can still be found quite easily in Korea.

Some Koreans believe that the dog meat stew gives virility and stamina to men after they eat it.

If you’re in the mood for some fresh seafood, then gaebul might be for you!

These worm-like marine animals are chopped up into bite-size pieces while still moving for your chewing enjoyment. They are served with salt and sesame oil and have a mild flavor. 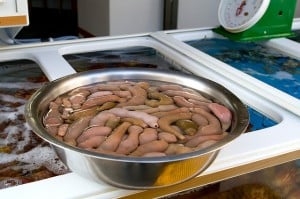 They are famous for resembling a certain part of the male anatomy and are rumored to be an aphrodisiac. You can find this weird Korean food at many of the fish and seafood markets throughout the country.

If you’ve seen the Korean movie Old Boy (올드보이), then you probably will never forget the legendary live octopus scene. Live octopus tops the list of weird Korean food for many people.

San (산) means “living,” and nakji (낙지) means “octopus,” and it is just exactly that. 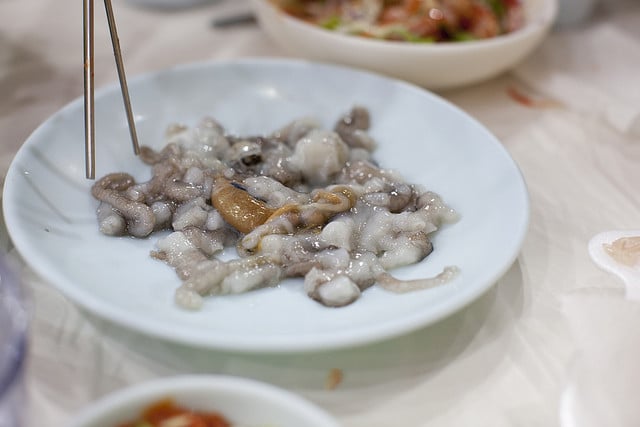 Sannakji is one of the most popular foods in Korea at seafood restaurants. Live octopus is served in different ways. Sometimes the tentacles are cut off and eaten immediately, while the octopus’s body is put into a soup. Alternatively, the tentacles may be served on a stick and eaten while still moving.

The body is cut into small pieces and put into a bowl to enjoy sesame and sesame oil.

You may have noticed the frequent use of the word “live” in this paragraph. If you’ve never had your food moving around in your mouth before, then you may be in for quite a treat!

For example, North Korean food tends to be less spicy and more simple, with an emphasis on more grains and vegetables compared to its southern counterpart.

Although the North and South share some common foods like kimchi and beef bulgogi, some dishes are more unique to North Korea, such as “Pyongyang Cold Noodles.”

If you happen to be in Nampo City, you might also experience eating “Petrol Clam Barbeque,” which are clams cooked in…petrol! However, it is said that you can’t taste the petrol with your seafood, so no need to worry. This dish is best enjoyed with a bottle of soju.

So, there you have it! Those are our recommendations for unique and weird foods in Korea.

If you’re looking for more delicious Korean foods to try, we’ve got you covered. Korea has foods for every occasion, be sure to try the seasonal foods in summer and winter.

What is your favorite among these unique Korean foods? We’d love to hear from you, so feel free to leave a comment below!