In today’s lesson, we’ll learn how to say “fish” in Korean and go over different words for fish and seafood in Korean.

Some of the most fun and useful vocabulary to learn and enhance your language skills is what animals, and the sounds they make, are called. Even more fun, or at least convenient and practical, is learning what to call the animals you are accustomed to seeing as food.

Are you ready? Let’s get learning! 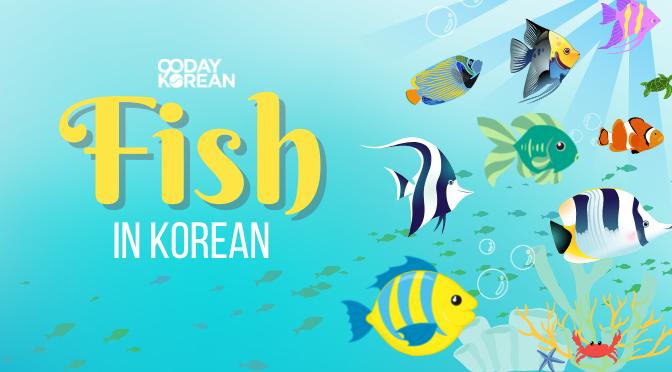 In this lesson, we’ll explain the words using Hangeul (Korean Alphabet) and also give you romanized English. Learning Korean is easier if you can read the alphabet, so we recommend learning it as soon as you can. Go here to learn in about 1 hour.

The Korean word for trout is 송어 (songeo). This is a freshwater fish that falls in the category of oily fish. A kind of trout called rainbow trout 무지개 송어 (mujigae songeo) can also be found in South Korea.

This is also the main ingredient for the unique Korean dish, fermented skate.

Cod fish in Korean is 대구 (daegu). This is known to be a flavorful and healthy type of fish. Braised cod fish is one of the popular Korean dishes you can make with this fish.

The Korean word for “mullet” is 숭어 (sungeo). The same term is used when referring to gray mullet and red mullet.

Here’s a list of popular sea creatures in South Korea with their Korean names. Also, the word for sea in Korean is 바다 (bad).

How to say “fish” in Korean

There are different Korean words for how to say “fish” in Korean. The basic ones are 물고기 (mulgogi), and 어류 (eoryu). Both are equally correct when referring to fish.

The first Korean word for “fish” is 물고기 (mulgogi) which you’ll hear much more often. Since the English translation for the word 물고기 (mulgogi) is water meat, you may also hear Korean fish being referred to as 고기 (gogi) alone, especially if the conversation is about fishing.

어류 (eoryu) is another term for “fish” in Korean, but this is used primarily in academic and scientific situations.

However, when you want to talk about “fish” in Korean in the terms of food you’ve eaten, want to eat, or will eat, the more appropriate word to use is 생선 (saengseon). 물고기 (mulgogi) is also okay to use, but you’ll impress your friends more with the word 생선 (saengseon). How to say “Fishing” in Korean

How about when you want to talk about fishing? There are a few simple conjugations of the same word that you can choose from, all of which essentially mean the same thing. The shortest one is by simply forming the sentence from the verb base 낚다 (nakkda). However, the more common one to use is 낚시하다 (nakkshihada). Both can be used interchangeably, and the meaning is simply “to fish.”

The word “seafood” in Korean is expressed and written as 해산물 (haesanmul) in Korean. So if you’re planning to eat some Korean food, specifically seafood, with your friends, it’s best to go to a 해산물 레스토랑 (haesanmul reseutorang) or seafood restaurant.

Seafood is a common ingredient in making Korean food. Korean dishes like spicy Korean fish stew are one of the best dishes made of fish.

While it is possible for you to study the words in this article simply by reading their romanized versions, it will come in handy for you to be able to read Hangeul if you ever wish to come to South Korea. Hangeul is the Korean alphabet and is not difficult to learn. In fact, you can learn it in just 90 minutes.

After you’ve familiarized yourself with Hangeul, life in South Korea will suddenly seem so much easier, and the country won’t appear so foreign to you. So, if you’re serious about learning Korean, why not learn Hangeul today?

Sample Sentences About Fish and Fishing in Korean

Now that you’ve learned different words related to fish and fishing, here are some sentences that you can practice with.

Is it possible to fish in this lake?

How many fish species are there in the world?

My hobby is fishing.

I want to have fish for dinner today.

I want to fish.

Do you want to go fishing this weekend?

So now that you know how to say “fish” in Korean, you won’t have to worry about being a “fish out of water.” You might also want to learn Korean through more lessons about other animals in Korean to enhance your language skills. If so, you can check out this article!

As you learn Korean, what word would you like to know about next? Comment below to let us know!