Hey K-drama fans! We’re going to cover some of the most common Korean drama words, phrases and expressions that are used in your favorite shows.

Do you know why learning Korean is fun? One reason is that you get to watch Korean dramas and understand what’s going on without subtitles.

And we’re going to help make that happen!

We’ll give you the phrases and their meanings. If the phrases have multiple parts, we’ll break them down for you. Then, as you watch your favorite Korean dramas, you’ll start to notice these phrases appear.

If you keep doing this, not only will you know more about Korean culture, but soon you’ll be watching dramas without subtitles. Exciting, isn’t it? 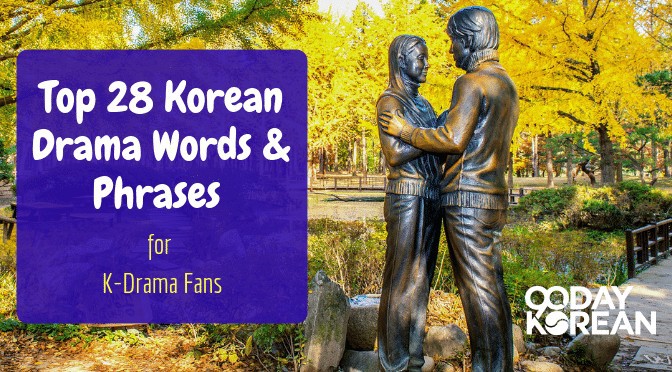 To get you off to a good start, we’ve also got a free PDF guide that you can download and take with you:

If you can’t read the Korean Alphabet yet (highly recommended!), there’s a free guide that will teach you in about one hour. You can get it here.

Certain phrases appear in dramas more often than in other formats. Also, certain slang words become popularized by their use in a drama and have since become a more common part of everyday Korean conversation.

For example the word 미생 (misaeng | incomplete-life) was originally a term used in the Korean game 바둑 (baduk | Go)! Now it has become a popular word to describe the Korean office environment thanks to the drama (and 만화 | manhwa) of the same name.

In Korean dramas, you’ll never hear this being said to someone older or someone holding a higher position than the speaker unless the person means to be rude.

This word is used at the beginning of a statement or a question where a person is having doubts about a particular thing. The word 혹시 (hoksi) means ‘by any chance’ or ‘maybe.’

This is one of the many words Koreans consider as Konglish. This means ‘call’ or ‘deal’ and is used when you are up for the challenge or when you are agreeing on something.

This phrase is used when the person you are talking to seems to be lying. It came from 뻥을 치다 (ppeongeul chida) which means ‘tell a lie.’ 지마 (jima) is from the polite phrase 지 마세요 (ji maseyo) which usually denotes “do not.”

We usually hear this phrase in romantic comedies or romance dramas. A person says this when he or she wants to hide his or her true feelings or intentions. But this phrase can generally be used when you don’t want others to misunderstand or misinterpret you.

This phrase consists of two words. The word 오해 (ohae) means ‘misunderstanding.’ The word 하지마 (hajima) from the polite phrase 하지 마세요 (haji maseyo) means ‘do not.’ If you want to sound polite then you may say 오해 하지 마세요 (ohae haji maseyo).

이렇게(ireoke) is a phrase that could be used to ask someone how to do something or instruct someone to perform something in a certain way depending on the context. This phrase means literally ‘like this’ although the nuance can be ‘what should I do?’

This phrase can be used in many different situations.  It is used when a person just got something he or she wants, won the jackpot, or when a person feels lucky.

In dramas, we often hear this phrase when the character is agreeing to another character’s ideas and opinions. It means sure or of course.

Sometimes, the word 그럼 (geureom) can be used at the beginning of a sentence that indicates a condition. It can be used to mean “if so..and then.”

This phrase is usually used when you want another person to wait for you. It literally means ‘for awhile’ or ‘wait for a while.’ You can add 요 (yo) to it to be polite then that would be 잠깐만요 (jamkkanmanyo).

This is one of the phrases we commonly hear in dramas when a character is being asked for an opinion, idea or an answer and he or she doesn’t know what answer to give or they want to have some time to think. This phrase can mean ‘I don’t know,’ ‘well,’ or ‘let me see.’

어쩔 건데? (eojjeol geonde) means ‘what are you going to do?’ Again, this phrase may only be used towards a person really close to you or someone of your age and to a person younger than you. It would sound rude and impolite when used to a stranger and to an older person.

This question is usually used when a person is looking at you in a strange way.

In dramas, you would usually hear this question among characters who have the same age or is addressed to someone younger. More often than not using 뭘 봐요 (mwol bwayo), although it has 요 (yo), it could be disrespectful when used in the wrong tone. This means what ‘are you looking at’ or ‘why are you looking at me.’

This question can be heard in dramas when the characters hear some strange sound or they hear a sudden noise. 무슨 (museun) is another form of 뭐 (mwo) and 무엇 (mueot) that means ‘what.’ The word 소리 (sori) means ‘saying’ or ‘mean’ and 이게 (ige) means ‘this.’

So, when you hear a strange talk and you want to know what it is you may ask 무슨 소리야 이게 (museun soriya ige).

This is one of the common phrases you hear in Korean dramas which is expressed when a person doesn’t know how to do something. Sometimes, it is also used to express empathy to another person.

This phrase consists of the verb 하다 (hada | to do) + 지마 (jima | command to not do something). 하다 (hada) + 지마 (jima) = 하지마 (hajima) giving the phrase 하지마 (hajima) the meaning “Don’t do that”. It is a shortened version of 하지 마세요 (haji maseyo).

This phrase 하지마 (hajima) is heard in dramas and among K-Pop artists a lot, along with 가지마 (gajima | don’t go). It is often said in a pleading tone by whichever character is getting dumped in that particular episode.

If the other person doesn’t respond to the speaker’s ‘하지마’ (hajima), then he or she will keep teasing the speaker. Then the next line out of the speaker’s mouth is often ‘하지말라고’ (hajimallago).

The 라고 (rago) ending is one of the many ways to use reported (indirect) speech in Korean (along with 다고 (dago), 자고 (jago), and 냐고 (nyago). Using these endings is a little bit tricky and requires some study, so just learn this phrase for now.

Often part of the drama plot will involve somebody lying, and eventually being found out. The word 거짓말 (geojinmal) means lie. 이야 (iya) is the standard informal ending for nouns.

Combining the word ‘lie’ with the words for ‘don’t do’ results in the phrase 거짓말 하지마 (geojinmal hajima). This is one of the phrases you’ll hear quite often in Korean dramas.

Often this is said in dramas when somebody is really annoying the speaker. The ending -을래(요) (eullae(yo)) means ‘to want’ and is often used as a question ‘do you want?’

In this phrase, it is added to the end of the verb 죽다 (jukda | to die). However, you can also use this ending in other situations such as 뭐 먹을래요? (mwo meogeullaeyo | ‘What do you want to eat?’).

Often in K-Dramas, somebody will have to meet at a café with somebody they don’t like. Usually, this person is an evil mom trying to bribe her in an attempt to stop her from seeing her son.

If one person is leaving first, then in informal situations he or she will sometimes say 나 먼저 가 (na meonjeo ga) or 나 먼저 갈게 (na meonjeo galge), both of which mean ‘I will leave first’.

Read about how to use this phrase properly here.

In Korean dramas, when somebody finds out some exciting gossip, then he or she will almost certainly say one of these three words.

All of these words mean ‘really?’ in English. They are all used with about the same regularity as the next so learn them all and use them to sound more natural. You might also hear them with a 요 (yo) at the end, such as 그래요 (geuraeyo) , 진짜요 (jinjjayo) and 정말요? (jeongmallyo) .

This drama phrase is used to show disbelief. It is often used by the character playing the evil old man who is surprised that he hasn’t been shown the proper respect by the main character (despite his repeated attempts to ruin said character’s life).

When used in normal Korean, 안 돼(요) (an dwae(yo)) means that something is not allowed.

For example, you could say 수영하면 안 돼요 (suyeonghamyeon an dwaeyo) ‘Swimming is not allowed’. However, in dramas, it is often said by the female character (speaking to herself while crying) just after being dumped. She is literally saying ‘he is not allowed to leave me’ as she can’t believe that she got dumped.

The verb ‘to apologize’ is 사과하다 (sagwahada). The ending -세요 (seyo) in this context shows that you are asking somebody to do something. The fact that the word is a homonym for the Korean word for ‘apple’ hasn’t been lost on the cheesy Korean scriptwriters who use this terrible pun on a regular basis (for example, in 꽃보다남자 (kkotbodanamja)).

Both of these phrases mean the same thing, but the second one is more polite. Adding -하세요 (haseyo) to certain words will make it more polite.

From the verb 미치다 (michida | to be crazy), this phrase is used on a regular basis in K-Dramas. As this is one of the more rude Korean drama phrases that you will hear, be careful using it in real life. Saying this during a conversation or in everyday life would be considered very rude.

This is one of the phrases that are often said under someone’s breath in K-Dramas. The phrase is made up of to words. The first is 미친 (michin), which means “crazy”. The second is 놈 (nom), which means ‘person’.

Keep in mind that this is one of those phrases that has negative connotations. It can be used with other adjectives to make similar phrases, such as ‘나쁜놈’ (nappeunnom) too.

Watching dramas is a really great way to get the hang of the Korean pronouns and their proper usage. Instead of the word ‘you’, Koreans use a variety of different words based on people’s position in society. The most common are:

This is one of the phrases that are often used by the whiny rich girl in K-Dramas who is a love rival of the main female character. The word 줘 (jwo) comes from the verb 주다 (juda | to give), and is the informal way of saying 주세요 (juseyo). If you use this phrase, be sure to use your most whiny voice possible.

Learning these Korean drama phrases will help with your understanding of Korean dramas. Keep at it, and you’ll be watching them subtitle-free in no time!

How do you say “episode” in Korean when talking about dramas?

If you want to learn Korean, go here for a full guide. It will help you with speaking Korean and becoming more familiar with the Korean language in general. We also have a structured online Korean course that will teach you how to have a 3-minute conversation in Korean in the first 90 days.

What of these Korean drama phrases is your favorite? Let us know in the comments below!