In this article, we’ll talk about Konglish and Korean loan words.

What if we told you that even if you’ve never studied Korean a day in your life, you already know plenty of Korean words!

How is this possible? Perhaps you were a Korean scholar in your past life? Or maybe your roommate has been secretly teaching you in your sleep. While those may be possibilities, the more likely scenario is because of a good friend of ours—Konglish!

Read on and get all the details below. 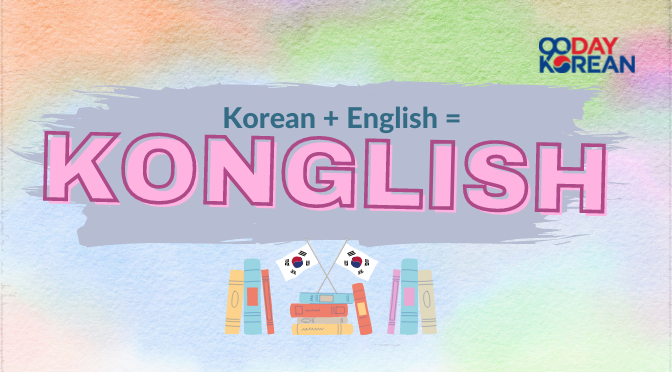 It’s easy to get the English translation of Konglish words! With the help of Konglish, you’ll be speaking like a pro in no time.

Here’s a free PDF list of Konglish you can download and refer to when you need it.

Konglish (콩글리쉬) is the Korean version of English words.

Korean people took the English word and sounded it out in Hangeul (the Korean alphabet) for some words that weren’t in the traditional Korean language.

This is excellent news for you as a student of Korean because you can start saying words in Korean from the get-go without having to pick up a single book. It’s an easy way to start speaking Korean.

Other Konglish words are made from Korean words and/or English words not used in English-speaking countries.

This brings us to the distinction between loanwords and true Konglish words.

Korean Loanwords or 외래어 (oeraeeo) are Korean words or phrases derived from the English language and have the same meaning as the English word. If the meaning of the word or phrase is the same as in English, they are called loanwords. Some common loanwords also come from the Japanese and German languages.

These words are easier for even native speakers of English to understand because the pronunciation is easily recognizable, and the meaning of the word remains the same. Therefore, even without knowing Korean, you may understand these words.

If the word’s meaning or phrases changes from its meaning in English, we refer to them as Konglish words. If you have studied Japanese, you may notice some similarities.

Often, words and phrases borrowed from English (and sometimes other languages) are shortened. Slang words in Korean are often shortened but differ from Konglish words.

For native speakers of English, these can be more difficult to understand. Without studying the meanings, in some cases, it would be hard to understand what Koreans are referring to—even though they are derived from English! Depending on the context, you may be able to decipher the meanings, but still, they require a little learning.

Words and phrases borrowed from English or other languages are often shortened if Koreans feel they are too long, and these shortened words account for a large number of Konglish words.

Also, sometimes Konglish words add morphemes or combine English words to create new words. In many cases, the word takes on a Korean meaning exclusive to Korean speakers, and native English speakers may not comprehend its meaning.

Here are a few examples:

You need to take into account one thing when reading both loanwords and Konglish words, and that is pronunciation.

Since we sound out English words in Korean, the words may sometimes sound slightly different than the standard English pronunciation. Some will sound identical, and some will sound somewhat different to you.

Let’s take a look at the Konglish pronunciation of the words “menu” and “orange” (for “orange,” the fruit, and the color).

Pronounced similar to “orange.” However, there is an extra syllable in the Korean version. Therefore, the pronunciation sounds like “o-ren-ji”

Yikes! You may be wondering: “How do I know when the pronunciation is slightly different than English?” Great question!

If you’re looking at the word in Hangeul, you follow that pronunciation. If you can’t read the Korean alphabet, learn the Hangeul fast and easy here.

The other great thing about learning these words is that Koreans will be impressed with your pronunciation!

They are used to hearing Korean learners saying “orange.”

So, if you kick things off with the pronunciation “o-ren-ji,” you already get bonus points! Koreans will recognize your language skills, so you will get more Korean-speaking opportunities if you want them. Stepping up as King of Konglish reaps many benefits!

Let’s get our feet wet by going through the most commonly used Konglish words. Then we’ll go to the complete list.

Now we will cover some of the most frequently used Konglish words. These words follow the “80/20 Principle”, which states that “20% of the vocabulary is used 80% of the time.”

While we’ll cover the comprehensive list of Konglish words below, use these 25 to get started with. These are commonly used Konglish words that you should put most of your focus on in the beginning to save time and avoid overwhelm. These are the words you want to refer to often.

We’re sure you’re excited to get rolling, so let’s get you started with 25 of the most frequently used Konglish words!

Can't read Korean yet? Click here to learn for free in about 60 minutes!
Get the Complete List of Konglish and Korean Loanwords PDF

What does the Korean term 서비스 (seobiseu) mean in English

If you’re loving the Konglish vocabulary so far, and want to up your skills, then we’ve got a complete Konglish words list for you right here!

How to Use Konglish Words

Now that you’ve got these Konglish words in your vocabulary arsenal, it’s time to put them to use!

The next time you go into a convenience store or supermarket in South Korea, you can ask for one of the items. Even if you don’t understand Korean yet, that’s fine. Usually, you can guess from the context of the situation when someone is asking if you’re looking for something.

Once you hear a question-like sentence, it’s time to spring into action with your newfound Konglish knowledge!

Remember, it’s critical to practice the pronunciation of these words. Some terms sound similar to the English pronunciation, but some are quite different. If you are traveling to or living in South Korea, then you have a chance to build up your skills every day.

The sooner you can get in the groove of pronouncing words like a Korean, the better you’ll be understood. The more you are understood, the more motivated you’ll be to learn the language!

You can also get to know these words better by looking out for them as you go about your day. Use them combined with some common Korean words or survival phrases like hello and thank you.

When you’re out shopping or doing errands, try to spot the Hangeul for the words you learned today. Writing them will also be good practice!

Although it may be tempting to use the Romanized version of a word (“menu” instead of “메뉴”), it’s better to get in the habit of writing the Hangeul. You’ll learn faster, and South Korea will become a more familiar place much quicker!

It’s exciting to know that it’s possible to learn Korean quickly if you focus on the right parts of the language and make it FUN. We can help you learn Korean in a fun and easy way with our Inner Circle web program.

What is your favorite Konglish word? Let us know in the comments below!

91 replies to "Konglish – Complete list of Korean loanwords for 2023"