Ready to learn the names of fruits in Korean? We will cover those, as well as the names for vegetables and nuts in the Korean language.

We’re going to cover the most important words you should learn first, as well as give you some example sentences so you can put them to use. 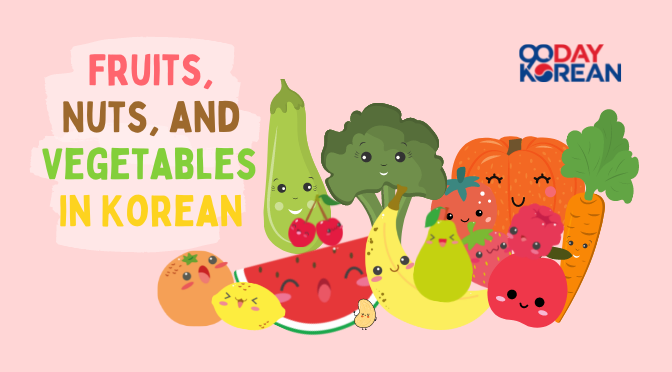 These Korean nouns are going to be a key part of your plan if you’re learning Korean or have an interest in Korean culture. The good news is that you already know a lot of these Korean words (we’ll explain how).

Below is a free PDF guide that you can download and take with you:
Get “Fruits, Nuts, Vegetables in Korean” Free PDF Guide

As we cover the terms for fruits, vegetables, and nut vocabulary words in the Korean language, you’ll notice that they’re written in both Hangeul (Korean Alphabet) and in romanized Korean. The English spelling is just an approximation of the sounds. Your pronunciation will improve significantly if you learn Hangeul.

Grab your free guide here and learn Korean in about 1 hour.

Here is a list of different fruits in Korean and most of these can be found within Korea. Keep in mind that some of the fruit names will sound very similar to the English word. For example, 레몬 (remon | lemon) sounds just like “lemon.” That’s the beauty of Konglish and Korean loan words: You already know them!

We’ve also added sample sentences in some vocabulary below. Use them to practice speaking and reading. They’re useful for understanding Korean grammar better. You might also try combining sentences with Korean conjunctions or Korean particles.

If you’re craving freshly squeezed fruit ades while in South Korea, knowing these terms will help. Let’s start off with the word for fruit.

The word for “fruit” in Korean is 과일 (gwail). Korean fruits are categorized into different kinds below.

Next, we’ll cover some of the berry fruits. Most of these fruits sound like their English counterparts, except for Korean strawberries and raspberries. Both of those words have Korean double consonants, so make sure you pronounce them correctly.

The “strawberry” in Korean is 딸기 (ttalgi). If you like fresh whole strawberries, there are plenty of areas in South Korea where you can go strawberry picking. 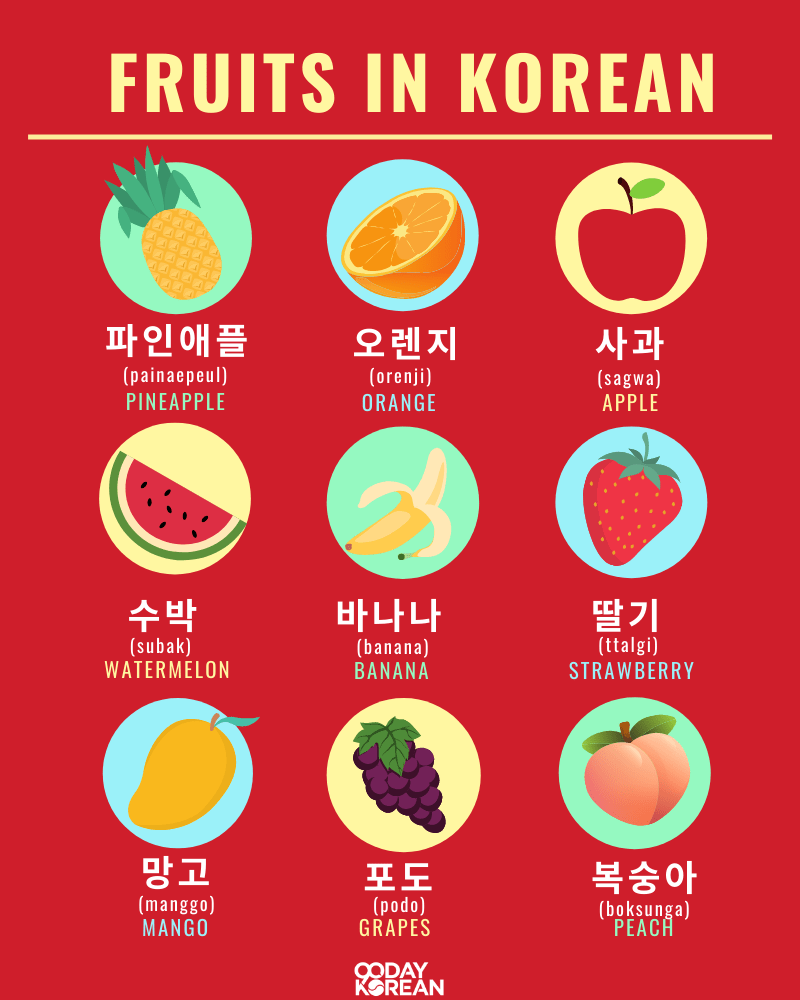 Here are some of the citrus fruit names in Korean. They are known to have plenty of health benefits.

오렌지 (orenji) is the Korean word for “orange” that refers to the fruit. However, a different term is used for the color orange, which is 주황색 (juhwangsaek).

I drink orange juice every morning.

And now for the remainder of the fruits. If you want an easy way to remember the Korean word for “apple,” there’s a Korean joke about it that makes it hard to forget.

In the Korean language, this fruit is still called 바나나 (banana). Remembering it is easy as it is pronounced the same way as its English word. There’s also a famous banana-flavored drink called Banana Milk (바나나맛 우유 | bananamat uyu). A sweet flavor that is an ultimate must-try!

The word for “peach” in Korean is 복숭아 (boksunga). If you’re familiar with Kakaotalk, one character named Apeach (어피치) was created based on the peach fruit. Peaches are seasonal fruits that are popular during summer.

The Korean word for “apple” is 사과 (sagwa). However, some also use its Konglish term, 애플 (aepheul).

Fun fact: 사과 (sagwa) also means “apology” in Korean.  So in Korea, when people want to apologize to someone, they sometimes give an apple to express how sorry they are.

The word for “persimmon” in Korean is 감 (gam). This fruit is used for the Korean drink 수정과 (sujeonggwa) mixed with ginger, cinnamon, and brown sugar.

The Korean word for “pear” is 배 (bae). The same term is also used for Korean pears, Korean snow pears, or Korean apples.

“Pineapple” in Korean, which sounds very similar to its English counterpart is called 파인애플 (painaepeul). This tropical fruit is known to be a great source of Vitamin C!

My favorite fruit is pineapple.

The Korean word for “watermelon” is 수박 (subak). This huge fruit is typically sliced and shared by many, especially during summer in South Korea. This is different from Korean yellow musk melons or 참외 (chamoe), or the Korean melon 멜론 (mellon).

How many slices of watermelon do you want to eat?

Now that you know the fruit names in Korean, let’s cover the Korean vegetables.

Food plays an important role in Korean culture. This cuisine includes vegetables in most recipes too, so if you’re interested in anything about Korean food, learning this vocabulary is essential. Here are some vegetable names in Korean.

Before we learn the terms for different vegetables in Korean, let’s start with “vegetable” first. The word for vegetable in Korean is 야채 (yachae).

Below is the list of the different vegetables and how they’re called in Korean.

“Carrot” in Korean is called 당근 (danggeun). The same term is used as a Korean slang to say “of course” which is 당연하지 (dangyeonhaji), since they sound very similar. 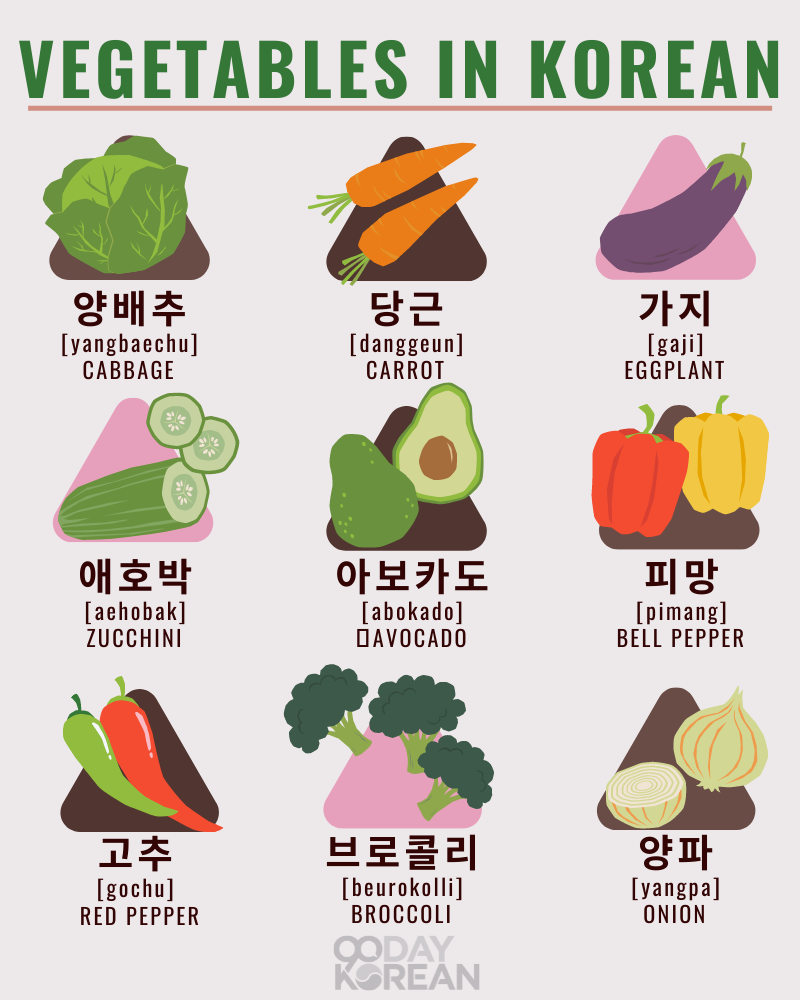 The Korean word for “onion” is 양파 (yangpa). If you mean to say “spring onion” in Korean, the term you can use is 골파 (golpa).

The word for “cucumber” in Korean is 오이 (oi).

Please buy three cucumbers when you go to the grocery store.

Names of Nuts in Korean

Lastly, below are the different names of nuts in Korean. 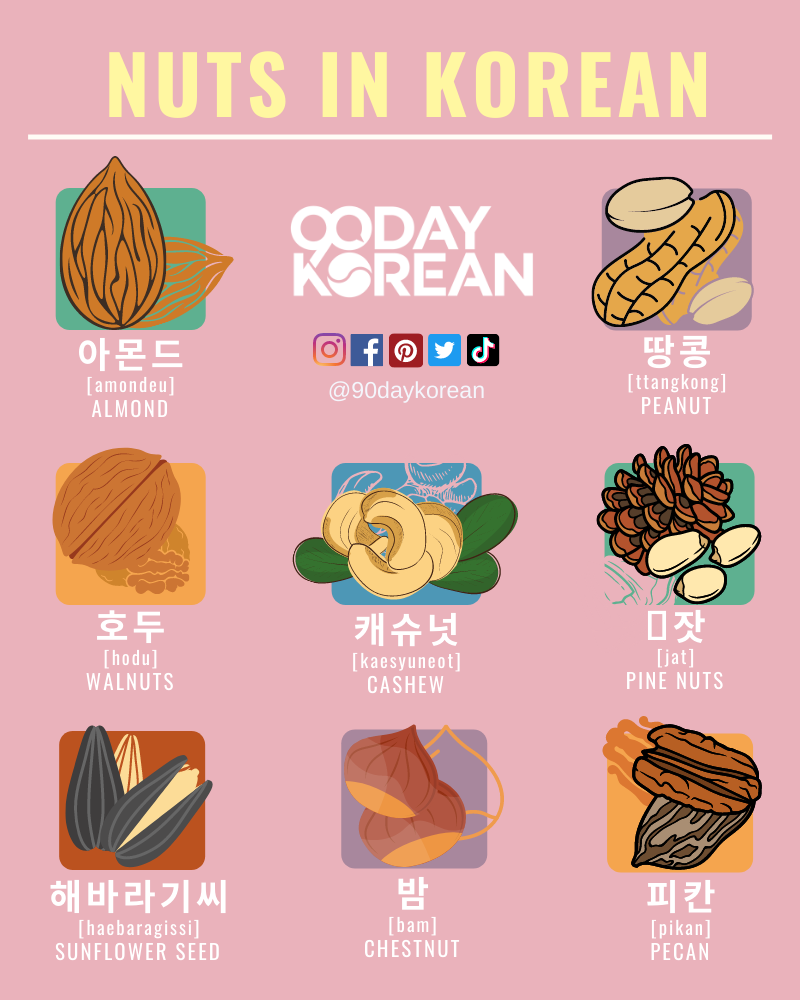 Now that you’ve learned all about Korean fruits, nuts, and vegetables, it’s time to start making sentences like the examples above! They’ll definitely come in handy if you’re living in Korea or plan on shopping at a Korean supermarket abroad. Perhaps you also plan to visit South Korea or specific areas like Jeju Island for a taste of these Korean fruits and Korean vegetables and a taste of Korean culture too!

What’s your favorite fruit? Is it a banana, orange, pineapple, or peach? Or maybe it’s a lemon or plum? Do you prefer citrus or tropical fruit? Show us your Korean fruit, vegetable, and nut skills in the comments below!