How to Say “Crazy” in Korean – The meaning of 미쳤어 (michyeosseo)

Do you think knowing how to say “crazy” in Korean would be useful to you as you’re learning Korean? Some might think not, as it can be considered a rude remark to make and usually has only a negative nuance. However, learning this term also has its advantages. 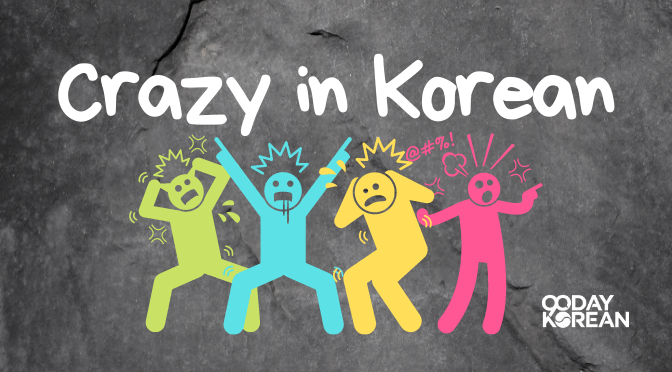 Upon learning how to say “crazy” in Korean you will also find yourself surprised with just how many times this word is used in Korean pop songs or K-dramas. This suddenly makes it an incredibly fruitful addition to your vocabulary.

Here’s a PDF guide on how to say “crazy” in Korean that you can download:

Get How to Say “Crazy” in Korean Free PDF Guide

Are you ready to learn how to say “crazy” in Korean?

The word most often used for “crazy “in Korean is 미쳤어 (michyeosseo).

It stems from the verb 미치다 (michida) which in this context translates to “go crazy.” It can also mean “be out of one’s mind” or, simply “go mad”. It’s used in the past tense.

Take note that “crazy” is often used in an extremely informal way in the Korean culture, so you might want to steer away from using it around elders in South Korea. 미쳤어 (michyeosseo) also means to “lose one’s mind”.

“Are you crazy” in Korean

“Are you crazy” in Korean uses the same word as “crazy” which is 미쳤어? (michyeosseo). The only difference is the intonation that goes up at the end for “are you crazy” as it is said as a question.

This is also one of the most common Korean drama phrases so this might already sound familiar.

That boy is crazy.

I’m crazy because of you.

Other Words for “Crazy” in Korean

You might also be wondering what are some other Korean words with similar meanings. Here are some expressions with which you can enhance your vocabulary.

An expression you can say to describe when you feel like going crazy is 미칠 것 같아 (michil geot gata).

“About to go crazy” in Korean

Another similar phrase is 미치겠어 (michigesseo) which means describes someone is about to go crazy.

“To go crazy” in Korean

Basically, by adding different types of conjugations to the basic form of the verb 미치다 (michida), you can come up with different expressions for “crazy”. Although the nuances of each expression are not that different, each one is preferable for different situations.

We’ll usually give you the romanization of Korean words so you can get some assistance with the pronunciation when you’re first starting out. However, you’ll do yourself a huge favor if you take the time to learn the Korean alphabet (Hangeul).

As you learn Korean, especially the Korean alphabet, it might seem like a scary idea, with the completely new alphabet system and all. However, it’s actually a very systematic and simple alphabet to grasp! With the right tools, you can learn to read Korean in about 90 minutes.

Now you should be ready to listen to Korean pop songs and recognize this word in use in the lyrics. Perhaps you can express how crazy Korean drama scenes are in your favorite K-drama.

Get How to Say “Crazy” in Korean Free PDF Guide

Alternatively, go out in the real world to express when you’ve gone crazy over something or joke with your friends about things that don’t seem quite right to you. However, remember to use the Korean words for “crazy” with caution, or just avoid calling a person crazy!