Korean superstitions are not only interesting, but they’re still widely used today in Korea. It’s a fun way to learn about cultural norms, especially living or traveling in Korea.

Superstitions in Korea are unique, engaging, and helpful to learn, especially for travelers. 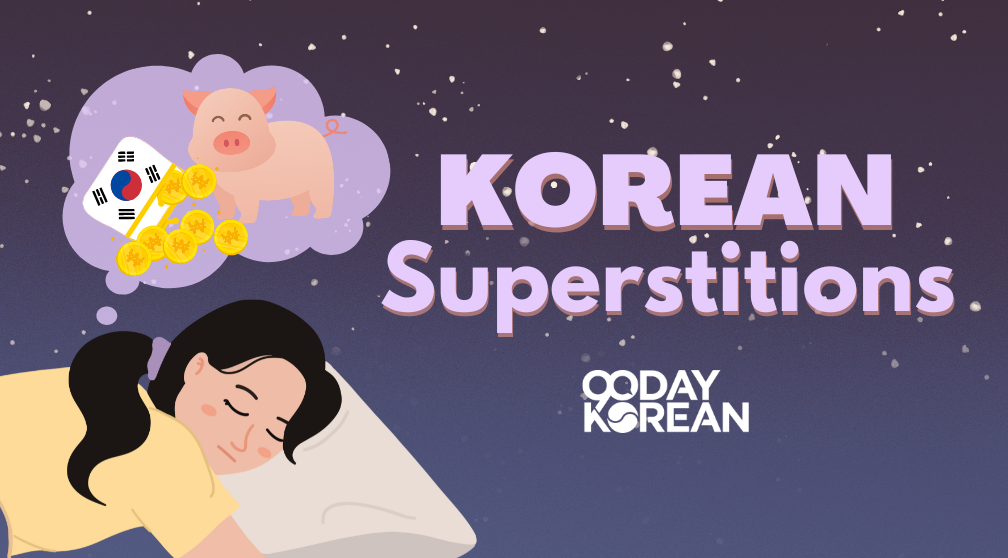 Below is a free PDF guide for “Korean Superstitions” that you can download and take with you:

Get “Korean Superstitions” Free PDF Guide
Knowing Korean superstitions can be beneficial, so you can know what to watch out for. For example, the color ink you choose might not matter to you when writing someone’s name. Let’s get to them!

It’s moving day, so make sure you have everything packed. Favorite athletic pair of shoes? Check. Giant coffee mug from a trip to India? Check. Evil spirits? Best to leave those behind!

According to Korean superstition, moving to a new home on certain days of the month can bring misfortune. Some believe that evil spirits will follow you to your new place. This may cause a lot of trouble.

According to folklore, this activity will prevent the ghosts from heading into the heavens if you block them with your moving activities on certain days. Luckily, a calendar will help you choose the correct dates to move according to this superstition.

Follow this calendar and make sure that you keep the bad luck away from you. The calendar title is called “손없는날 달력” (soneomneunnal dallyeok | evil spirit-free day calendar). 손 (son) means “evil spirit.” Stay away from the dates on the calendar with “손없는날 (soneomneunnal)” written on it!

Have you heard of the Korean Fan Myth? Yes, you’ve read that correctly. Although the death threat caused by electric fans to some Koreans is a mystery to many foreigners visiting Korea, the Korean Fan Death myth is one of the more common Korean superstitions.

Although there’s no scientific evidence that Korean fan death is a real thing, some Koreans still believe that electric fans can cause death. According to this Korean superstition, the cause of death is that the fan creates moving air around your face. That moving air makes it hard to breathe, so people suffocate.

Not all fan situations are wrong, though. This superstition says that you’re good to go if you have some windows or doors open. However, if you close the windows and doors in a room with a fan on, you’re asking for trouble. 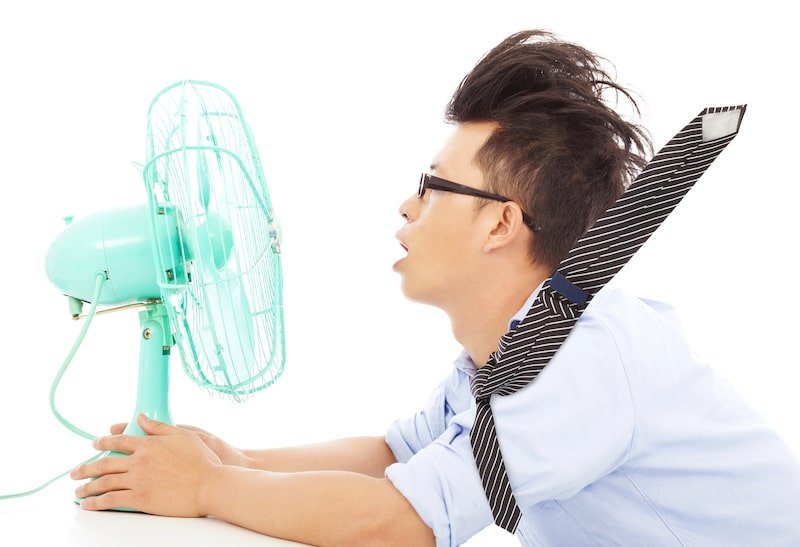 Let’s hope he knows the dangers of Korean fan death

It’s such a widespread belief in South Korea that many consider the fan timer a lifesaving function. The Korean phrase for “fan death” is 선풍기사망설 (seonpunggisamangseol).

Whistle while you work? Sure, that shows you’re a happy person. Whistling at night? It’s probably not a great idea if you believe in Korean superstitions. 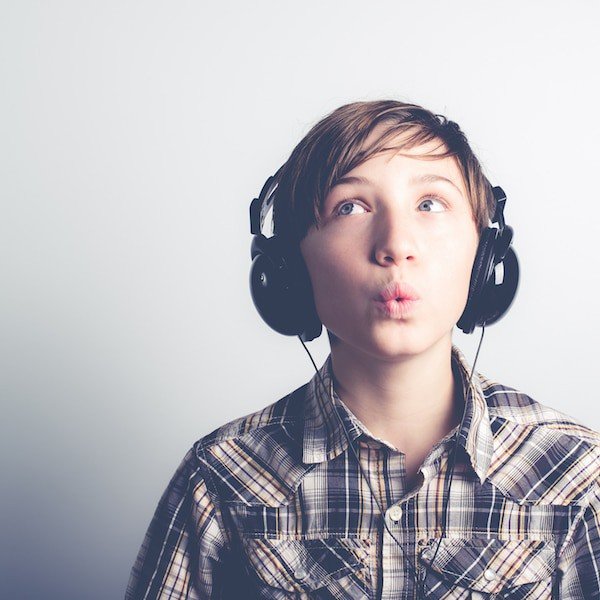 So, what happens if you whistle at night? According to Korean superstitious beliefs,  snakes love a good whistle tune at night. Some also believe that whistling at night summons Korean demons and other creatures not from this world.

If you have to, schedule the whistling sessions after sunrise!

The number four is bad luck in South Korea. This is common in other countries in Asia, too. It’s similar to the superstition in the western world about the number 13.

Koreans believe that certain numbers hold significance. The number four is bad luck since it is similar to the word for death. As a result of this Korean superstition, the fourth floor of a building is often replaced with an “F.” For example, the floor sequence will go 1, 2, 3, F, 5, and so on. 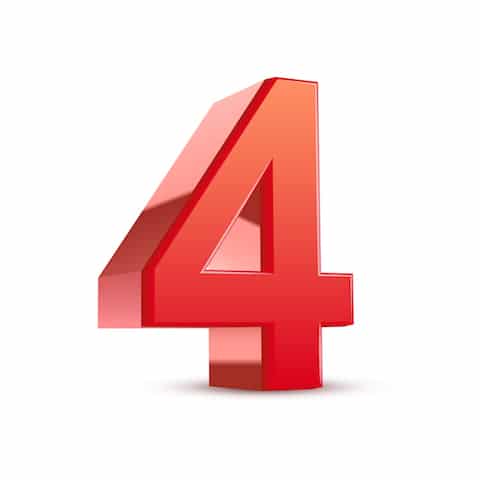 Apartments with multiple “4s” have a lower value since many see them as bad luck.

The Korean word 사 (sa) means “four,” and it also means “death.” Follow this Korean superstition to keep good luck flowing your way! For more on numbers and counting in Korean, check out our complete guide here.

Let’s take a kimbap, for example. If you look at a sliced kimbap, the middle pieces are more organized and look more appealing than the ends.

According to this superstition, if a mother eats the middle pieces while pregnant, she has fortune on her side to bring her some good-looking offspring. 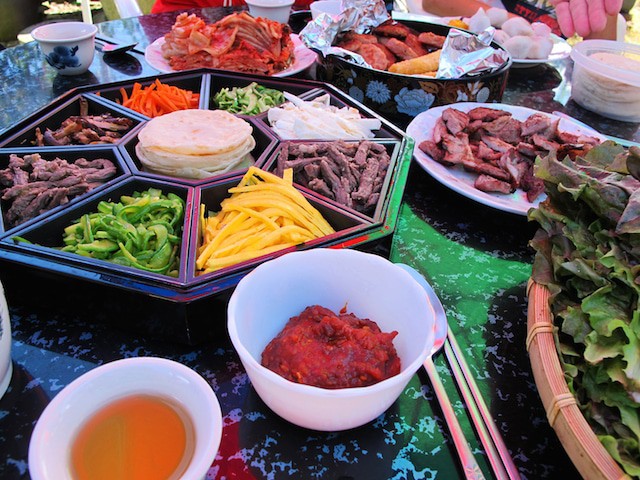 If the mom loves to chow down on the kimbap ends, then she’s less likely to have to worry about her children becoming celebrities. Keep this Korean superstition and other Korean table manners in mind next time you have your meal.

Don’t Give Shoes as Gifts

Aside from the fact that it’s hard to find someone’s correct size, giving shoes as gifts in South Korea is a no-no. Koreans who believe in this superstition believe that giving shoes will cause the receiver to run away.

Thinking about giving your girlfriend or boyfriend a pair of shoes? Don’t bother. This is especially bad to do with your significant other unless you’re trying to find a subtle way to give a hint! 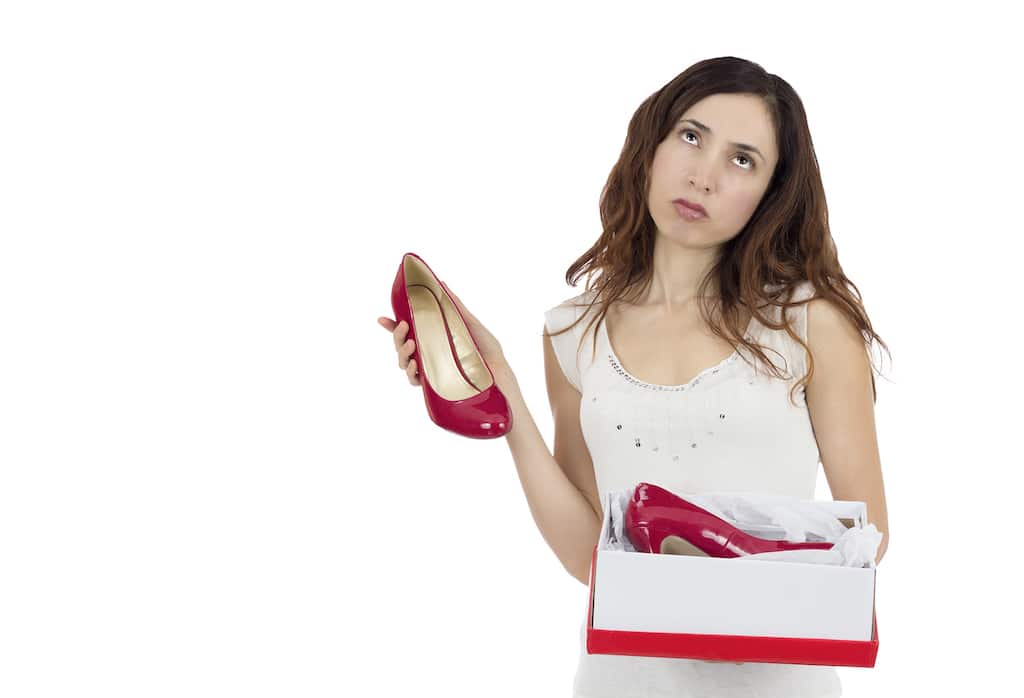 This is one Korean superstition that you may want to stick to if you care about your relationship. There are plenty of great gifts you can shop for in South Korea, so best to stay away from shoes.

Not only does shaking your legs distract Grandma at the dinner table, but it also brings bad luck your way! 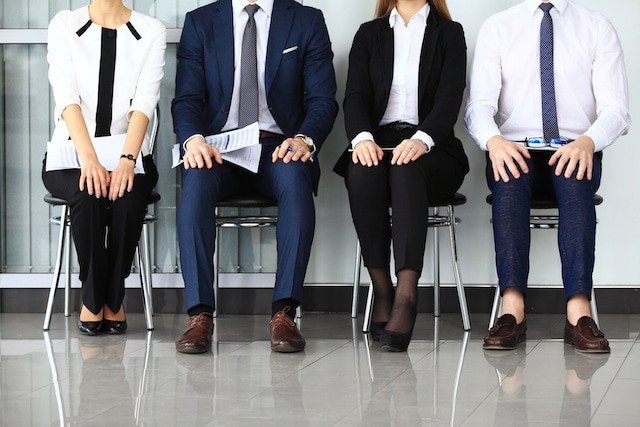 In traditional Korean culture, your legs symbolize wealth and prosperity. Koreans who believe in this superstition think that if you shake your legs, you’re shaking the wealth right out of you. You can say “다리 떨면 복 나간다” (dari tteolmyeon bok naganda).

It’s bad luck to write names in red ink. The main reason is that the names of the deceased used to be written in red ink. Therefore, if you write someone’s name in red ink, the superstition says that you’re giving any person a death wish! 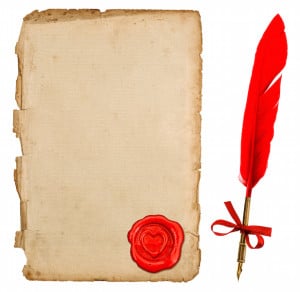 You’re safe with other words in red ink, but make sure the names stay in standard blue or black ink.

Better to keep those bright colors for special occasions and avoid this Korean superstition altogether.

Dreaming of Pigs is a Sign of Good Luck

If you wake up from a dream and feel like you just got back from a trip through an animal farm, you may be in for some good luck! 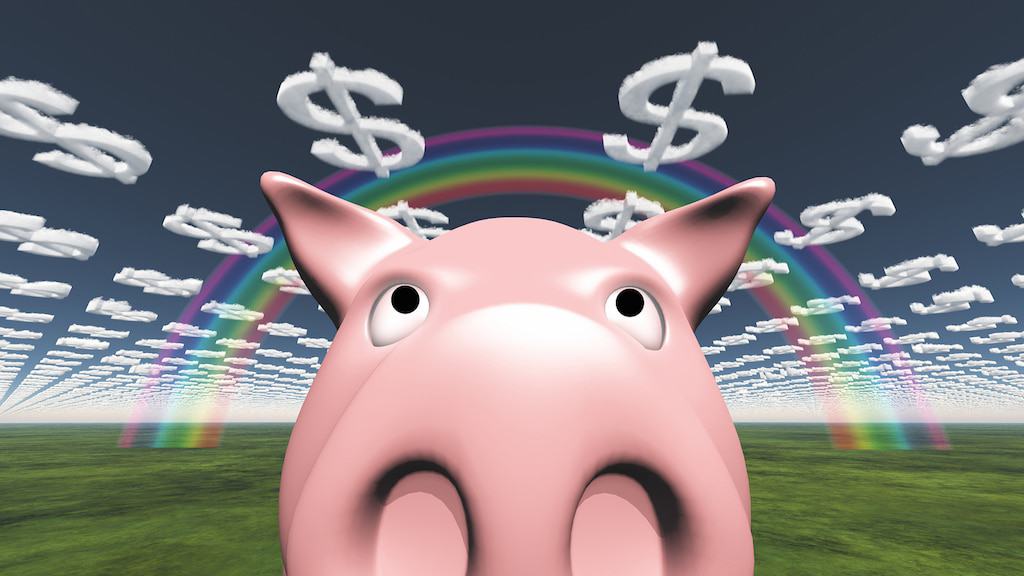 I’m so happy to dream of pigs!

The pig symbolizes good luck, wealth, and fortune in Korean culture. If you believe in Korean superstitions and you wake up with pigs on your mind, you may have wealth, a promotion, or other good luck coming up in your future.

엿 (yeot) is traditional Korean taffy made from glutinous rice. Because of its stickiness, this Korean superstition says that it will cause good luck to stick to you.

This principle of eating sticky food will make good luck stick also applies to exam answers. Eating 엿 (yeot) while studying will help knowledge stick in students’ minds. Students who believe in this Korean superstition will often eat it before exams to help them recall the correct answers.

Avoid Jumping Over Your Baby

Superstitious Koreans believe that if you jump over your baby, they won’t grow tall. 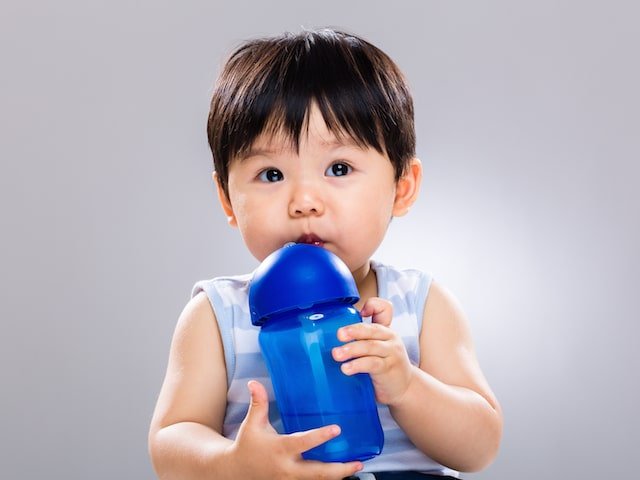 Since it’s dangerous to jump over your baby anyway, this is one Korean superstition that everyone should follow.

Don’t Touch Your Eyes After Touching a Butterfly

A Korean superstition says that if you touch a butterfly and then touch your eyes, you’ll go blind.

If you find yourself around butterflies (or moths), you may want to follow this Korean superstition and keep some wet napkins nearby or stop at the closest sink. 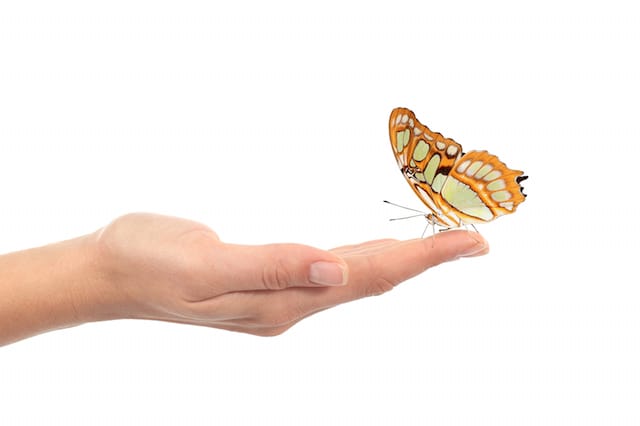 Like many countries in Asia, Koreans associate some objects and trinkets with luck and fortune. Many traditional Korean charms are used to get wealth and ward off misfortune. One example is the Pujok, a piece of paper (typically yellow) with symbols and patterns inscribed. The Korean talisman is said to ward off evil spirits and bring good fortune.

So we already know that the number 4 is unlucky in South Korea as it is associated with death. But did you know that there are also Lucky numbers in Korea? Similar to many Asian cultures, specific numbers are said to be associated with luck and prosperity. In Korea, numbers like 8, 9, and 3 are often considered lucky.

If you want to learn more about the Korean language, you can check out our structured online course. Our self-paced program can help you learn Korean in just 90 Days!

16 replies to "Korean Superstitions – Beliefs and Practices for Good Luck"