Korea is well-known for too many things to count – music, television, and a rich, interesting history are only a few of the things that make Korean culture so unlike any other.

Another aspect of the culture in Korea that is unique and hard to beat is the incredible Korean food sprinkled throughout the country’s cities. 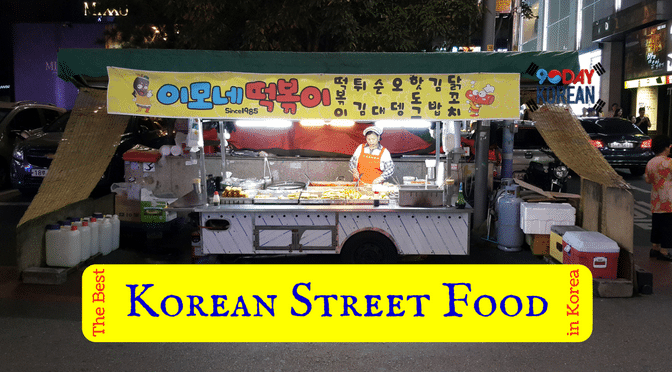 Whether you’re looking for a quick, salty snack or an adventure for your taste buds, read on to find out about some of the best Korean street food!

Sundae, the unique take on the blood sausage phenomenon in Korea, is a dish that smells and tastes better than it looks. This dish uses various body parts from both pigs and cows to create an unbeatable, complex dish that’s easy to scarf down. 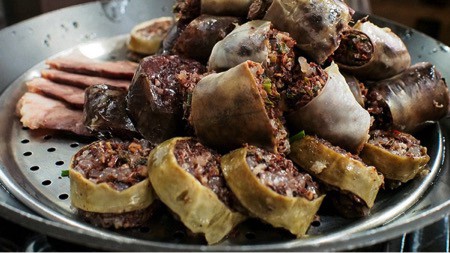 Have you ever tasted lung or liver? If not, 순대 can be your introduction. This is mostly served with lung or liver as a garnish. Don’t knock this blood sausage before you try it!

Yep, it’s exactly what it sounds like! Everybody loves to eat Korean fried food. 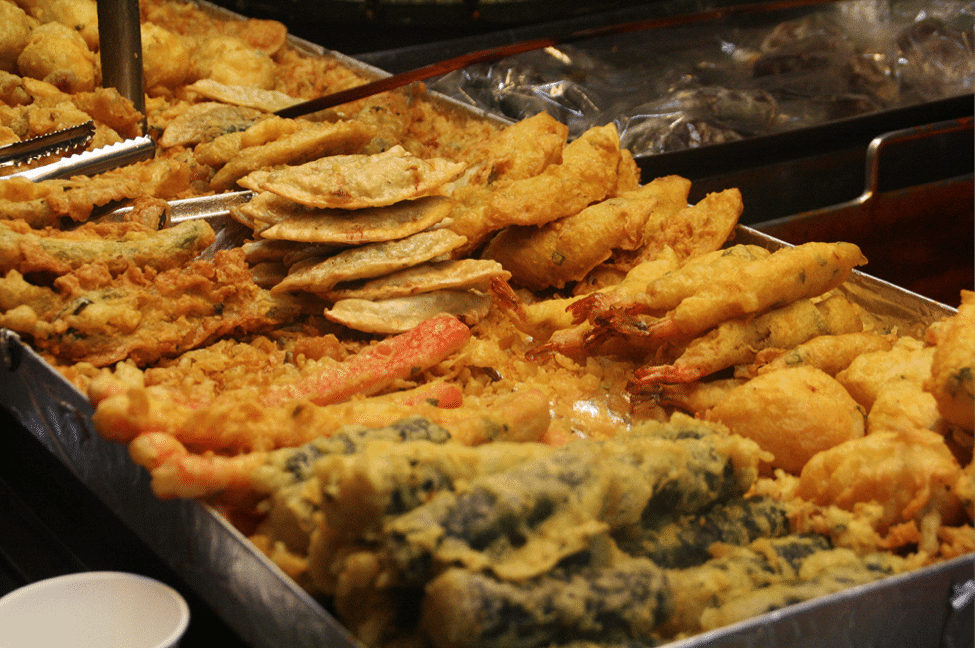 Vendors of Korean food, specifically street food in Seoul, are well aware of this phenomenon. As a result, they offer various flash-fried vegetables and dumplings to satisfy your craving for flaky, fried goodness. Doctors say not to overdo it on the oil, but this is a great once-in-a-while treat that’s easy to eat on the go.

Tteokbokki is not for the faint of heart – this dish comprises unassuming, mild rice cakes saturated in an intense, savory, spicy sauce. Korean spicy is definitely more intense than your everyday spicy, so tread lightly! 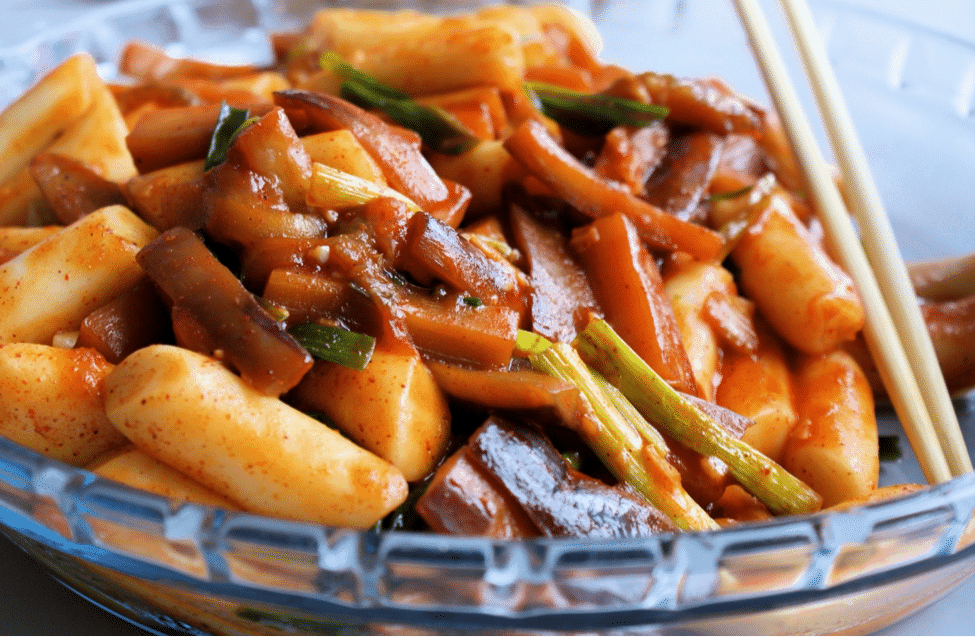 This dish is an age-old crowd-pleaser and is loved by people of all ages. This dish is often mixed with fish cakes. Give this fish cake and rice cake pair a try the next time you’re wandering through Seoul!

If you’re familiar at all with the Korean food and street food in Seoul, chances are you’ve heard of hotteok. 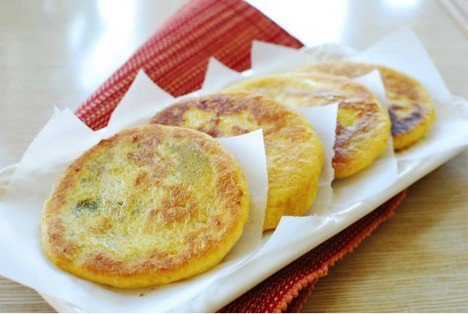 Hotteok is a dessert dish that involves griddle cakes fried on a hot plate stuffed with various sweet additions, including different types of sugar, fruits, and syrups. Grab some hotteok the next time you’re craving something sweet – these are especially sweet when the weather gets cooler!

This dish, like fried snacks, is also pretty self-explanatory. A whole egg is stuffed and cooked inside the bread, served warm and crispy. 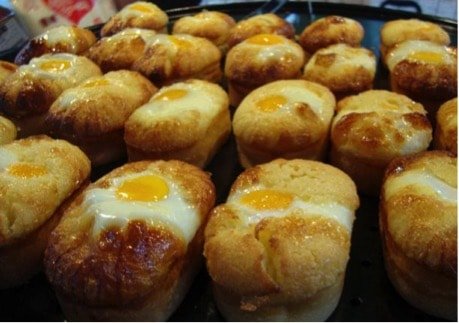 If you need some quick protein and carbs, egg bread is an efficient way to do it! Though traditionally eaten as a dessert food, egg bread also makes a smart breakfast (it knocks out two food groups at once!).

Take a walk on the sweeter sign and give walnut cakes a try the next time you’re out and about. 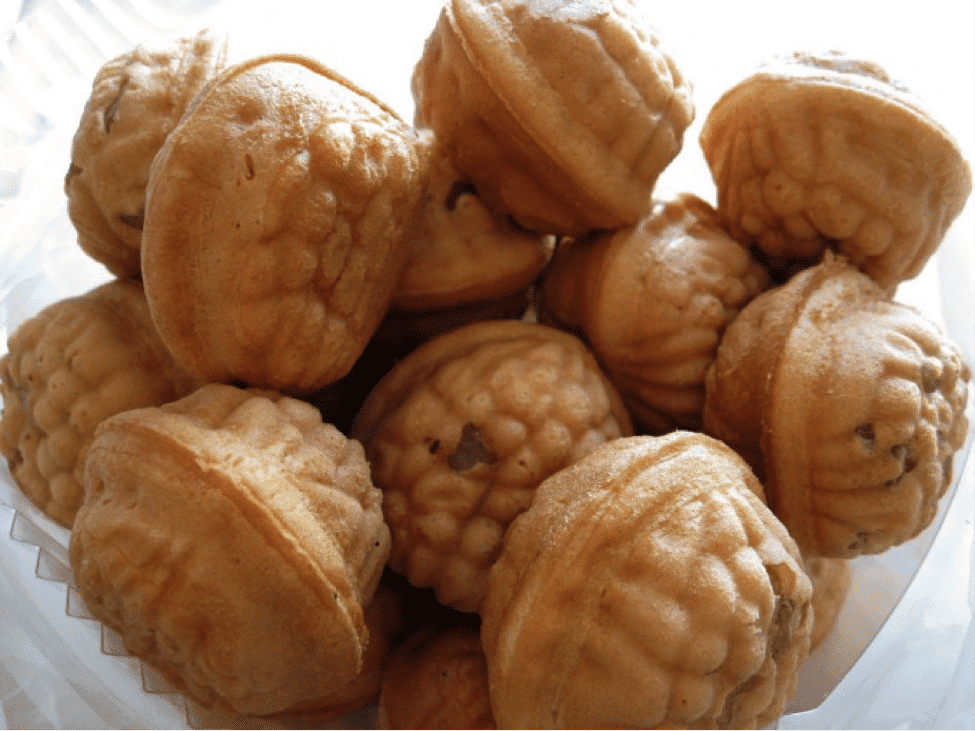 Packed with protein (both beans and walnuts), walnut cakes are a favorite in Korea that you can feel good about munching on.

Baby gimbap is one of the popular Korean street food in Seoul to eat on the go – it’s wrapped completely in seaweed, so it’s easy to pick up and snack on with minimal mess. 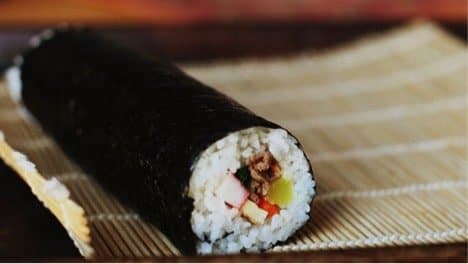 There’s rice and your choice of topping in the seaweed – some of the more popular ingredient choices include kimchi and octopus. This food is filling and easy to track down – give it a try the next time you want to snack without the mess!

There’s no shortage of rice cakes on the Korean street food scene. This popular food, for instance, is simply grilled spicy rice cakes skewered on a stick. Unlike the 떡볶이 tteokbokki dish above, this one doesn’t have any fish cake. 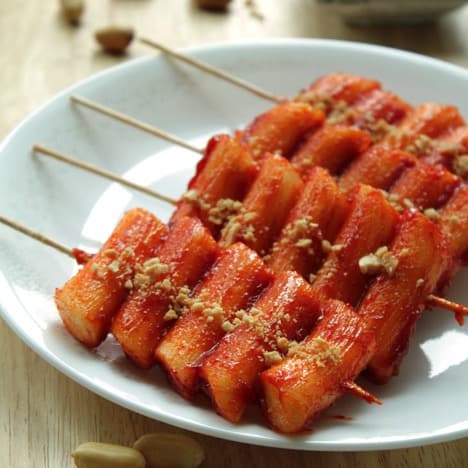 Sometimes simple is best, and the insanely popular spicy rice cakes go to show it! Taste and try Korean rice cake skewers out the next time you’re looking for food and find a new appreciation for spicy rice cakes.

Did you think we could get through a list about fast and easy Seoul street food delights without including some variation of fried potato? 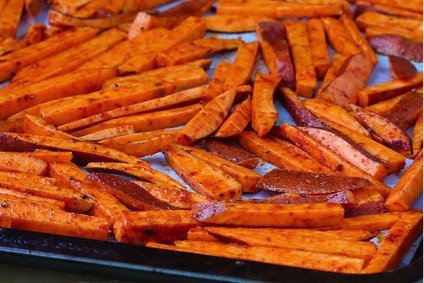 These sticks are a (slightly) healthier alternative to their cousin, the French fries. However, they’re prepared the same way – deep fried in hot oil that your doctor probably wouldn’t be too thrilled about. Sweet potatoes are densely packed with nutrients and are a better choice for snacking than the average potato. Get ‘em while they’re hot!

You can’t get more Korean than a Seoul street food dish that combines kimchi and fried rice for your snacking pleasure. 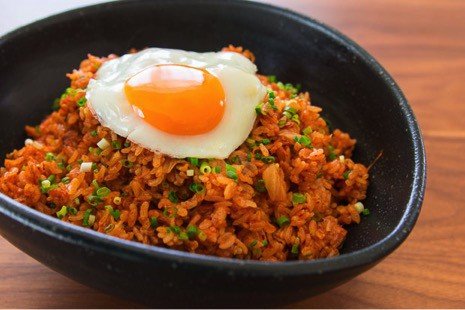 The dish also includes seaweed and can be topped with a fried egg and sesame seeds if you like. You must eat it warm, and you’ll be quick to realize why this Seoul street food meal is loved by so many!

Wait, come back! Let me explain. Does the fact that the larvae are boiled with sugar and soy make it sound more appealing? 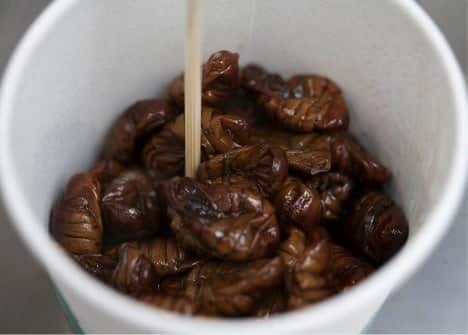 Despite sounding (and looking) not as enticing as the rest of the dishes on this list, this food is surprisingly popular and can be found throughout most cities in Korea. Grab a cup the next time you come across street vendors serving bundaeggi – think of the story you’ll be able to tell your friends!

This popular dish is fried fish paste, served on a chopstick for easy access. 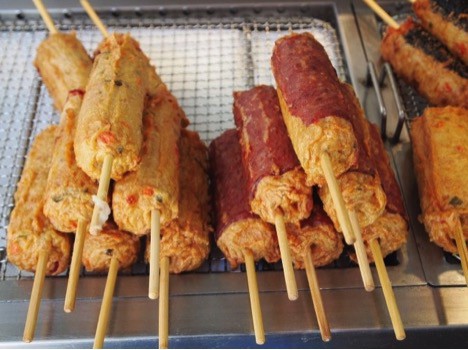 Best served steaming hot, hotba is a great salty snack that has a kick to it. Give it a try with ketchup and mustard for the full effect.

This Korean fried chicken, cup chicken, is unlike any dish you’ll find at a Kentucky Fried Chicken. 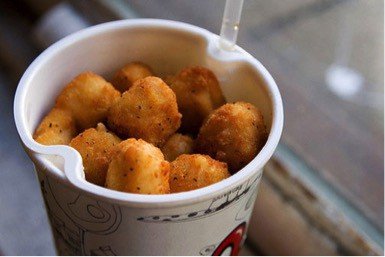 This one almost doesn’t need an explanation – who doesn’t love ice cream or waffles? This is one of the popular Korean street foods in Seoul, and it pairs two of the best foods on earth and marries them into one, easy-to-eat, delicious Korean food that you can eat on the go. 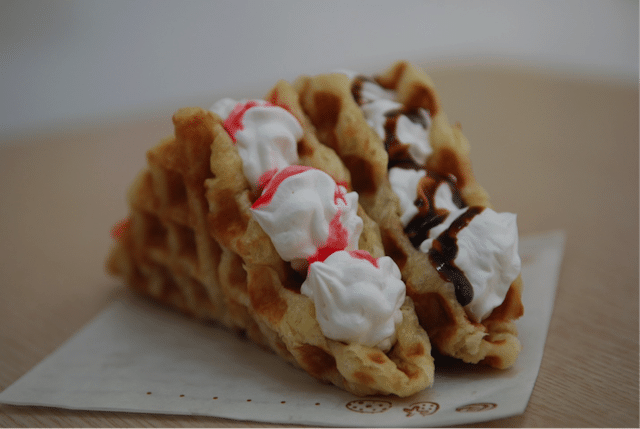 I personally love that the waffle adds a bit of crunch to the dessert that ice cream doesn’t have on its own – it makes this treat way more satisfying than enjoying each of them solo. Try Korean waffles the next time you’re looking for something light a sweet after a filling Korean meal!

Cotton candy isn’t a dessert limited to fairs and carnivals in Korea – it’s actually one of the most popular desserts sold at street food stalls in big cities like Seoul! Light and fluffy, this is the perfect snack if you’d like something light and sweet without committing to a full-blown dessert (despite the intimidating size of the cotton candy you’ll find in Seoul). 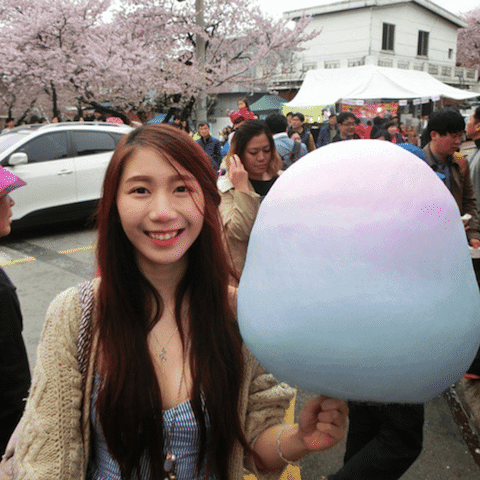 Korean cotton candy is often shaped in super fun shapes, too – you’ll find cotton candy shaped like flowers and animals just as often as you’ll find traditional, shapeless cotton candy. The best part is that because cotton candy is so commonplace in Korea, you won’t have to deal with waiting in line with twenty children in front of you before you get your snack. Pick up some cotton candy the next time you want a taste of childhood and a delicious treat at the same time – you’ll be glad you did.

If candy is more your style than baked goods or cold desserts, Korean lollipops are street food that is right up your alley. Crisp and very sweet, these lollipops are made from sugar that has been caramelized with a tiny bit of baking soda added to it. Sounds easy enough to make at home, right? 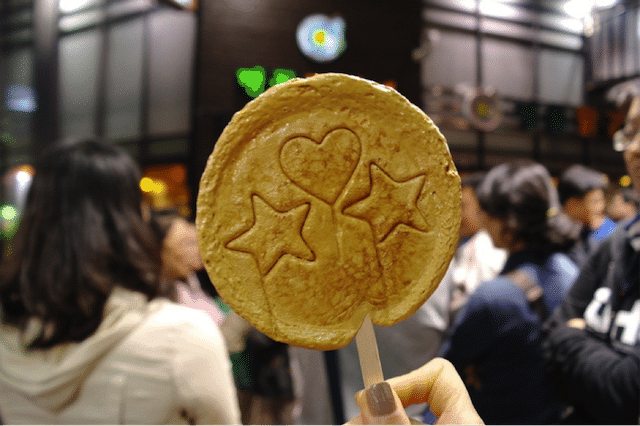 What you won’t find at home, however, is the fun contest the dessert vendors usually participate in – if you can bite all around the stars, hearts, and other shapes usually placed in the center of the lollipop without cracking the candy itself, you get another one for free! If you love candy, give the challenge a try – best-case scenario, you get two sugar lollipops, and worst-case scenario, you still have one!

Think of goldfish bread, or bungeoppang in Korean, as delicious waffle-like, fish-shaped bread filled with sweet red bean paste deliciousness. Prepared with a mold similar to a waffle iron, this food is best when served warm. The warmth combined with the crunch of the freshly toasted bread and the sweetness of the red bean paste filling makes for a delicious and easy-to-eat dessert treat. 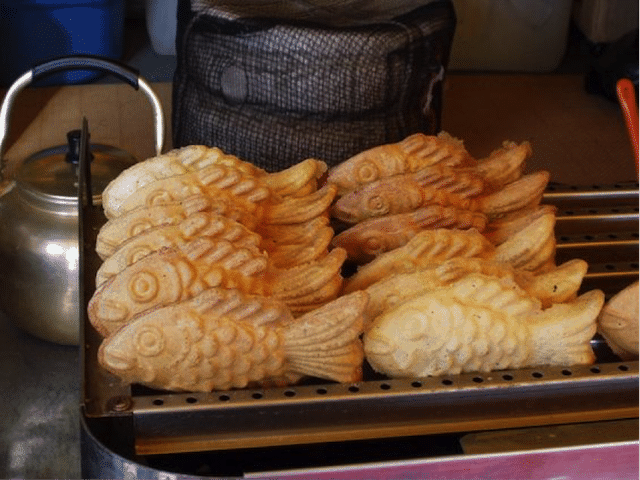 The first thing you’ll notice about this snack is its fish-shaped appearance. There are also many different variations of bungeoppang that make this food even more fun and exciting. For example, you’ll see versions of this pastry filled with ice cream and chocolate syrup, taking the sweetness factor to the next level. Whether you’re craving something mildly sweet or something out-of-this-world sweet, pick up the fish-shaped bungeoppang. That is if you’d like to eat Korean dessert snacks, which are a little more substantial than candy.

Calling all cars – this is NOT a drill! One of the Korean street foods that I am most excited about on this list is the potato hot dog, a crowd favorite in Korea. 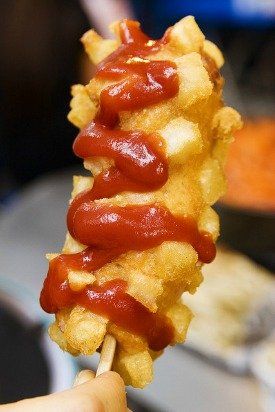 This food is literally a hot dog cooked to perfection and then covered in crispy, golden potatoes. What’s not to love? Pick up a potato-covered hot dog the next time you want to kill two birds with one stone (and have a great time doing it).

If you’re a squid lover, look no further – this deep-fried snack is for you! 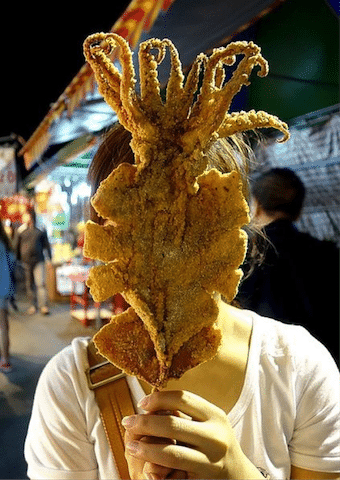 Why would you order small pieces when you can go big and order the entire squid? Definitely not for the mildly hungry; this is perfect if you’re looking for a filling, easy-to-eat replacement for a meal and think you can handle eating an entire deep-fried squid. Try Korean deep-fried snacks, and be sure to tell us about your experience in the comments below! 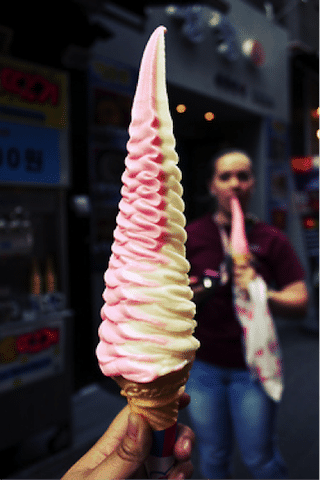 30cm ice cream cones in Korea are three to four times the size of your typical Mr. Softee cone, so this dessert is definitely not for the faint of heart or anyone without some serious room in their stomach. If you love this dessert so much that you put other ice cream fans to shame, definitely pick up one of these bad boys so you can tell your friends back home that you successfully finished a monster ice cream cone!

All snacks are not created equally – this list encompasses a wide variety of treats, and you’re bound to have a favorite. Please tell us about your favorite street food in Seoul in the comments below! Also, let us know if we’re missing anything – we’re ALWAYS ready to taste and try Korean snacks, how unique and new they may be!