Korean Adverbs are another part of Korean grammar greatly connected with Korean verbs and adjectives. It can be put to use in sentences, but also phrases and clauses – so basically, it can be a useful addition to any type of written or spoken word! 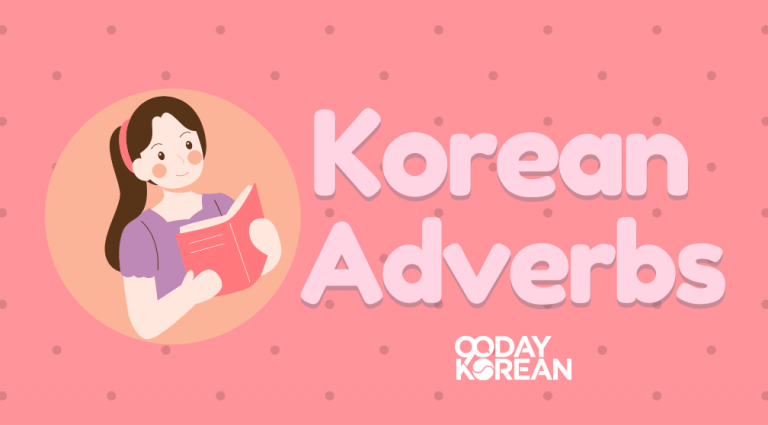 Adverbs may not be as easy to detect in sentences as Korean verbs, adjectives, and nouns might be. However, by the end of this article, we’re confident that you’ll learn Korean adverbs’ rules and master them!

What are Korean adverbs?

Korean Adverbs are used to describe a verb or an adjective further. You can expect Korean adverbs to operate largely in a similar fashion as they do in other languages. There are three ways in which adverbs are created and used in the Korean language, and at least 100 commonly used Korean adverbs.

To understand the basics of Korean adverbs, first, you will want to have a firm grasp of the lessons on Korean verbs and Korean adjectives, and basic Korean grammar.

The Korean word for “adverb” is or 부사 (busa).

Before moving onto the list of Korean adverbs we want to equip you with right away, let’s look at the Korean grammar rules with which adverbs are formed.

Do note that there are also numerous adverbs, such as some adverbs related to frequency, which do not need to follow any of these rules and simply stand on their own. In their case, you, unfortunately, have no option but to memorize which adverbs follow the rules and which do not.

Thankfully there are quite clear steps regarding what kind of adverbs fit which rule category. And to make memorizing a little easier, we’ve included the special adverbs that aren’t conjugated by any rules as a separate chart for you to memorize from.

The conjugation 히 (hi) is used when you form action verbs into adverbs. This is usually added to action verbs that end with -하다 (hada). To do that, you replace -하다 (hada) in the dictionary form of the word with 히 (hi).

In this example, both 결정하다 (gyeoljeonghada) and 농담하다 (nongdamhada) end with -하다 (hada). However, in order to turn them from action verbs into adverbs, the 하다 (hada) gets removed and is replaced by the syllable 히 (hi).

This is the case with all -하다 (hada) endings that are action verbs. Note that with adjectives using 하다 (hada) endings, a different rule is used to form adverbs, as is presented below.

With ~게 (ge) conjugations, you can make an adverb in Korean out of an adjective. In this case, you keep the entire word stem and simply replace 다 (ge) with 게 (ge).

As you can see in the above examples, 다 (da) gets removed from the verb stem, and 게 (ge) gets added, and a Korean adverb is thus formed. Do note that in the case of some adjectives with -하다 (hada) endings, the syllable 히 (hi)-rule is used. You, unfortunately, simply have to learn to memorize these different adverbs in Korean that “break” the rule.

Finally, the third way of forming Korean adverbs. Technically, ~으로 (euro) is a post-position, not an adverb. But when used together with adjectives, you can create adverbs from them. If you translate Korean to English, 으로 adverbs mean “in some way,” which helps explain why they can be used in adverb form as well. It’s used with adjectives that end in the suffix 적 (jeok).

With each adjective in the example above, the great thing is that you don’t have to remove any part of it; you just simply add 으로 (euro)!

Below you can find different types of adverbs and lists of Korean vocabulary formed from adjectives to their adverb form, which you can also start using right away.

If you’d like to describe something in terms of its degree or intensity, these are the adverbs that you can use.

Korean adverbs of degree without rules

Below is another set of adverbs of degree. However, these do not follow any rules.

Here are the common Korean adverbs in terms of frequency. They describe how often things occur or happen.

Korean adverbs of frequency without any rule

Similar to Korean adverbs of degree, some adverbs of frequency also do not follow any rule. Here are some of them.

The words for the adverbs of manner below are used to describe the action and descriptive verbs in terms of manner.

If you’d like to talk about a certain location of an object or a person, below are the common Korean adverbs of place.

The words below refer to the adverbs of time. These describe when events happened or will happen.

Other adverbs in Korean without rules

Similar to adverbs on frequency, here are other adverbs that do not follow any rule.

Sentence Examples of the Most Common Adverbs in Korean

Finally, here are a few example sentences to get you started on understanding how to use and place adverbs in a sentence.

Honestly speaking, this task is too complex for me to do alone.

Can you get home from the train station safely at night?

We miraculously won the game at the very last minute.

If we do this together with Mina, we can finish twice as quickly.

Now that you’ve found yourself equipped with a huge list of Korean adverbs and some example sentences aiding you in using them, you’re one step further in understanding Korean grammar. This will also greatly help in using the Korean language as naturally and colorfully as possible. As you learn Korean, you’ll highly appreciate gaining knowledge of these Korean adverbs.

What kind of adverbs do you most like? Which ones do you think will be tough to memorize? Let us know in the comments! If you’d prefer a lighter lesson next as you study Korean, how about learning some fun Korean exclamations?