How to Say “Good Morning” in Korean

In this lesson, we will teach you how to say “good morning” in Korean. This is an important greeting, especially if you’re in South Korea.

It’s also equally important even in different languages, as it’s always good to start off the day on a positive note and one easy way to do that is with a nice, polite, friendly “good morning.” 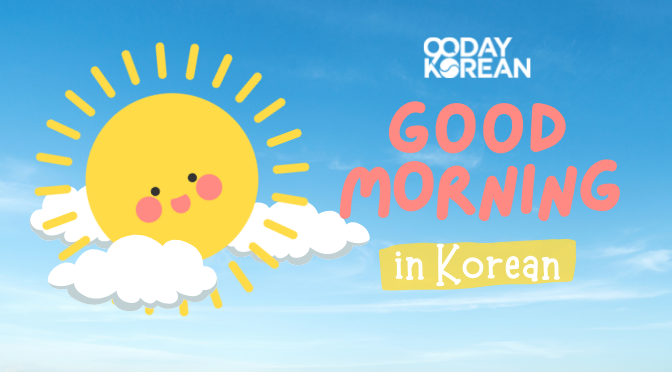 We also have a FREE PDF guide that you can take with you on the go. Check it out below:

Get How to Say Good Morning in Korean Free PDF

If you want to know how to say “good morning” in Korean in a formal way, or when speaking with somebody older than yourself, then these are the phrases to learn.

잘 주무셨어요? (jal jumusyeosseoyo) is a formal way of saying “good morning” in the Korean language with a literal translation that means “did you sleep well?”.

잘 (jal) means “well” in Korean. You can use this word in front of a verb, for example, by saying “잘 했어요” (jal haesseoyo) which means well done.

If somebody asks you “잘 주무셨어요” (jal jumusyeosseoyo)? then you need to reply using the lower form of the verb. In this case saying, you could reply with “네, 잘 잤어요” (ne, jal jasseoyo), meaning “yes, I slept well.”

These phrases should only be used when you first meet somebody after they wake up, i.e., at breakfast time. They can’t be used at 11:59 a.m. like “good morning” can in English. 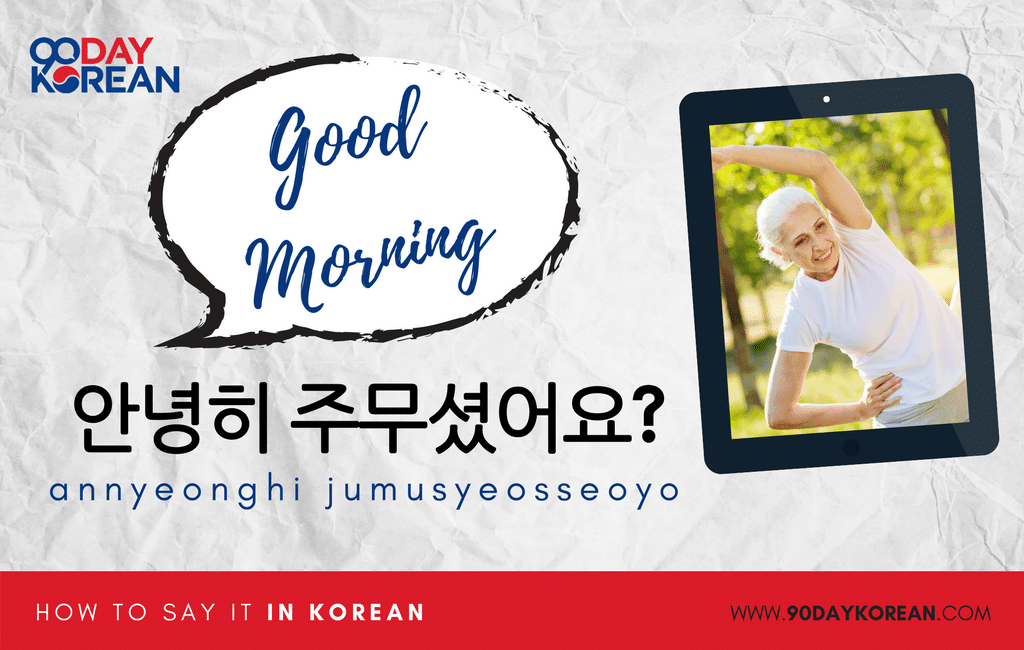 The honorific form should be used when speaking to people older or higher in rank than you. You should never use it when referring to yourself. It is therefore used mainly when asking a question.

You can also use this phrase to literally say, “The morning is good.” It’s used as the English phrase “good morning.” Since it uses the –입니다 (imnida) ending, it is more of a formal phrase.

Here are the standard ways of saying “good morning” in Korean.

This is the standard form of “did you sleep well?.” You might use this with new roommates while traveling with those older than you, or maybe in a text message. Or perhaps with someone who is of the same age but is not exactly close with you. 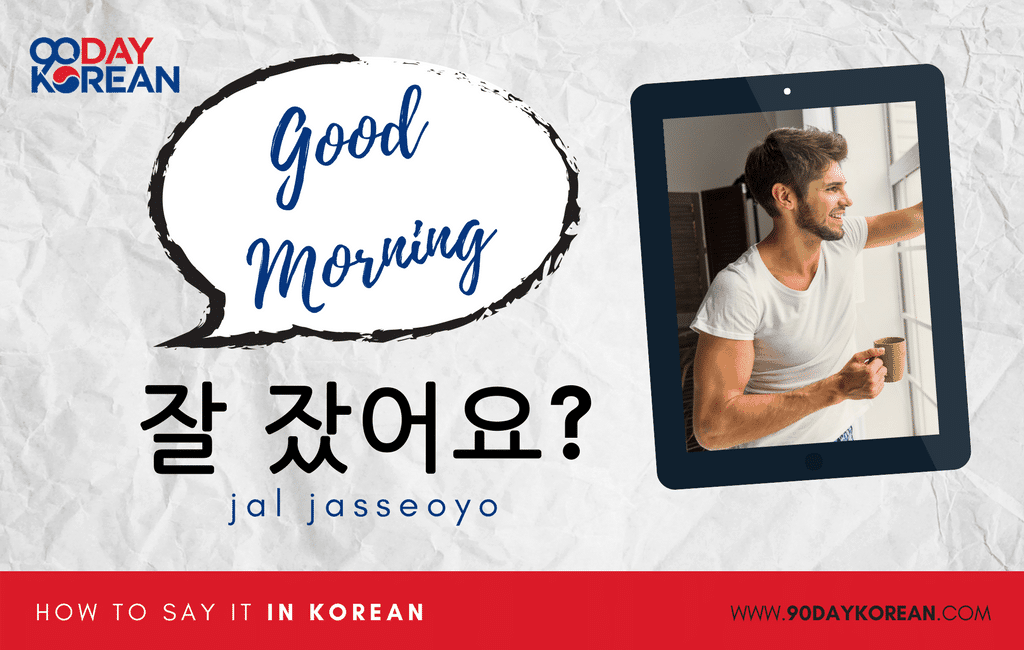 How to pronounce “Good Morning” in Korean

From what we have taught so far, there are various ways to say “good morning” in Korean. In the video below, we will teach you how to pronounce it in its standard form, 좋은 아침이에요 (joeun achimieyo).

How to Say GOOD MORNING in Korean | 90 Day Korean

If you want more videos on how to say different Korean words, you can also subscribe to our YouTube Channel for similar useful videos!

Lastly, here are informal ways of saying “good morning” in Korean, which is typically used with close friends.

When talking to your Korean friends, you can pronounce good morning in Korean as 잘 잤어 (jal jasseo). This phrase uses the past tense version of 자다 (jada), which means “to sleep.” 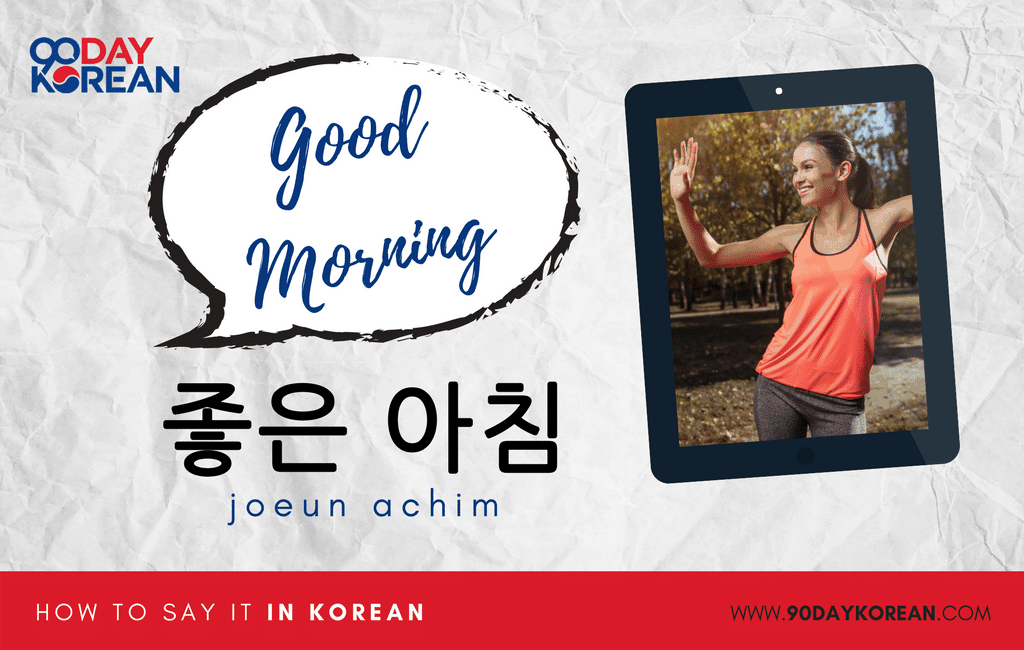 Hopefully, you now know how to say “good morning” in Korean. If you want to keep it simple, then just use the word “hello” instead of “good morning.”

If you want to just learn one way of saying “good morning” in Korean, then learn 안녕히 주무셨어요 (annyeonghi jumusyeosseoyo)? Your polite manners and consideration will definitely make everyone’s morning good!

For a complete guide on how to learn Korean online, go here: https://www.90daykorean.com/learn-korean/

We also have a structured Korean language web program that will teach you how to have a 3-minute conversation in the first 90 days.

Get How to Say Good Morning in Korean Free PDF

32 replies to "How to Say “Good Morning” in Korean"