A How-To Guide for Korean Texting

In this article, we’ll tell you all about Korean texting. You might have received a text from a friend in Korean, and you understand nearly nothing of what they’ve said? You’re not alone, and we’ve all had to deal with the same thing. 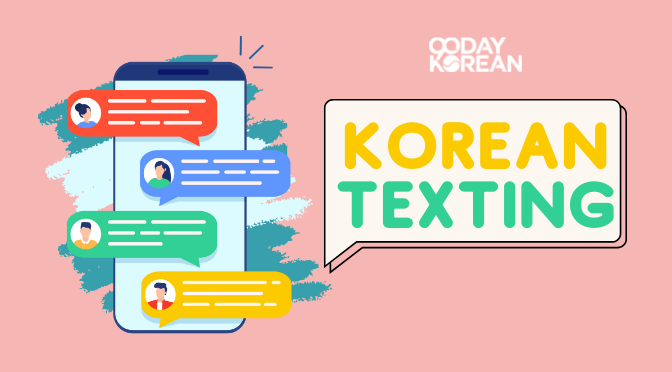 We’ll give you some words and phrases that you’ll definitely run into from time to time when texting your Korean friends.

We’ll also show you a couple of tips for how to understand things you’ve never run into before.

Below is a free PDF guide for “Korean Texting” that you can download and take with you:

For texting, we’ll start with some of the Korean texting shorthand that you’ll run into on a daily basis, and make you look more native as well.

The biggest tip we can give when trying to read Korean text messages if you don’t understand the word by itself is to read the message out loud. You’ll very often find that a lot of Korean text slang is, in fact, a word that you do know, just written faster or shorter to speed up texting.

If you want to really become a texting pro, you can try practicing typing Korean on your computer. Then you’ll have a better feel for how words are constructed in Hangeul.

For our example, we will be explaining the dialogue below.

Looking at the “에 만나 (e manna)” after “일욜 (illyol)” you can guess that this is either a place or time.

Koreans will often shorten all days of the week by changing the “요일 (yoil)” into “욜 (yol)”. So the above sentence means we’re meeting our friend on Sunday.

And in response to our friend above, a simple: “조아” (joa) will get the point across. This is only missing the “ㅎ,” and the pronunciation doesn’t change at all so is the most obvious one we’ll do today (좋아 | joa).

To explain, Koreans will often shorten the “-면 (- myeon)” grammar point to simply adding the “ㅁ” onto the final syllable.

But maybe we’re busy Sunday, and we’d rather meet sooner. Here’s another set of dialogue:

We can use almost exactly the same shortening rule as above and instead ask:

“낼 어때 (nael eottae)?”  So how does tomorrow work for you?

They’ve got a test tomorrow, but what’s with the “OTL?” In this case, we aren’t shortening anything, but are getting creative with the shapes of the letters. OTL looks like a person on their hands and knees hanging their head in defeat.

Finally, to finish this off, let’s tell our friends that we understand and that they’ll do fine by saying “알써~ 홧팅! (alsseo~ hwatting).”

And the same goes for “홧팅” (hwatting), just shorting a syllable from “화이팅” (hwaiting), or “you can do it!”

There are other times when Koreans will simply misspell words in their text messages to sound cute or playful. It’s just one aspect of Korean aegyo. This isn’t shortening it at all, but the same general rule will apply where you should just be able to read it aloud to figure out the meaning.

Next, sometimes in texts, you’ll just see a few letters thrown together with seemingly no meaning. These are the toughest to figure out without context, but hopefully, in your text messages, you’ll be able to piece the puzzles together.

These random-looking letters are generally just the first letter from each syllable in the word you or your friend is trying to say and are usually used as the full message (i.e. not often combined in longer sentences). Here are a few of the most common, with the shortened form, the real word, and what it means.

Finally, the toughest part you’ll often run into with texting your Korean friends is that they often do not use any spaces in between their words. This means you’ll get a huge clump of text to decipher. Just take it slow and you should be able to find where each word and the next begins.

Keep practicing, keep texting, and keep learning about the intricacies of Korean culture. You’ll be texting like a native in no time!

Use these abbreviations along with some Korean emoticons, and you’ll be all set! And if you still don’t know how to read the Korean alphabet, you can check our guide here.

Now that you know the basics of texting in Korean, why don’t you try it yourself?

The most popular texting app used in South Korea is called “KakaoTalk” (and you can score easy points if you know a lot about it). Downloading and installing Kakao is a great place to start! It’ll be very useful when you visit or stay in Korea!

Have some favorite texts you often use in Korean? Share it with us in the comments below!

34 replies to "A How-To Guide for Korean Texting"