Are you looking for some examples of famous foreigners in Korea?

We’ve got you covered! Read on to find out more about these 5 special people. 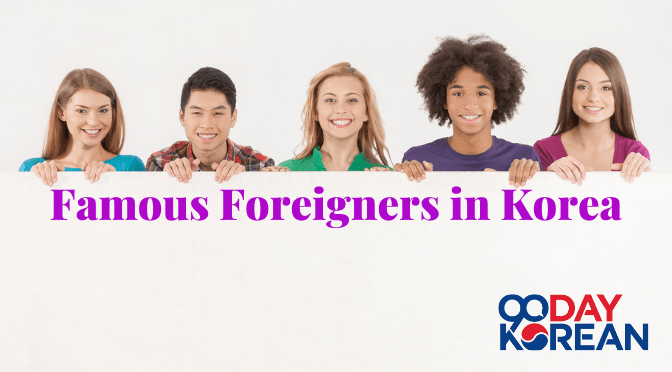 When it comes to blending into an exciting new place, learning the national language goes a long way.

There are a lot of ways to learn how to speak Korean as well as the foreigners on this list. Learning to speak Korean like a local is one way to instantly sound more fluent in the Korean language.

Part of the fun in learning how to speak Korean or another language is learning how to make yourself sound like the new people you are surrounded by. This is helpful when trying to make new friends and learn about an intriguing new culture.

However, anybody who has gone through the language learning process knows that even when you become a fluent speaker of your new language, you have a unique accent that is a fun reminder of where you’re from and can help distinguish you from native speakers. This is always the case, right?

Not quite! We’ve compiled a list of five people that have embraced Korean culture and learned to speak Korean so well that you would not be able to tell that they haven’t been speaking the language from day one. Their stories are below for your reading pleasure – read on, and pick up some of their tips so you can be on this list one day!

Robert Holley, or Ha-Il, was born and raised in California. He visited Korea when he was 17 and loved it so much that he returned to study at Yonsei University. He is now prominent in the Korean legal community and is well-known for being amazing at speaking Korean in the Gyeongsang dialect.

When Holley first moved to Korea, people didn’t quite know what to think of him, but before long they embraced him with open arms. He is dedicated to promoting understanding and tolerance. He is so well-liked that he is even asked to speak in front of government meetings and classrooms!

Robert Holley took the plunge almost thirty years ago and completely immersed himself in Korean life and language. His story is evidence that immersion is sometimes the best possible way to move towards being the best Korean speaker you can possibly be!

It seems as though Sam Hammington was destined to be a performer – born to a casting director in New Zealand, he quickly learned the ins and outs the art of entertaining people. He grew up in Australia, and he decided to learn an Asian language while he was in school to help make him a more appealing businessman. He went for the Korean language courses and never looked back. It seems as though he was destined to learn to speak Korean, too!

Today, Sam is a popular radio host and actor, appearing on programs like Real Men, Let’s Eat, and True Justice. He is best known for his sense of humor and ability to laugh at himself.

Sam’s story shows that classroom learning can definitely help jumpstart the process of learning to speak Korean, but he quickly moved onto full immersion to speed up his learning experience. Classroom studying provided him with the foundation – he just kept building!

Sam Okyere is another hot name in the Korean entertainment industry. He moved to Seoul in 2009 as a computer engineering scholar and quickly began gaining experience in the TV and modeling industries. He claims that these experiences help him make the most out of his time in Korea, and that they’ve shaped him into the well-rounded person he is today.

Sam has appeared in SNL Korea and has modelled in Vogue Korea, and he has become a household name in a relatively short period of time. This is undoubtedly partially due to his very high proficiency in speaking Korean – he almost sounds like he was born and raised in Seoul, not in Africa!

Sam sees his opportunities on television as a chance to be an ambassador to his birth country, Ghana, and is working to bridge the gap between Africa and Korea by spreading knowledge and passion for multiculturalism. When you have passion and a message to send like Sam, learning a language becomes much more important. You may be surprised at how quickly you learn to speak Korean if you figure out something that you’d like to say!

Julian Quintart moved from Belgium to Korea at the young age of seventeen and has been involved with television ever since – there was even a television crew at the train station that interviewed him when he first moved from Belgium ten years ago! Since that first appearance, Julian has gone on to be involved with modeling, DJing, and singing. Today, he regularly shares his opinions on Non-Summit.

From day one, Julian immersed himself in Korean culture and language, trying to be involved in as many interesting Korean experiences as possible. Today he can say that he has gone through training for the South Korean army, cycled throughout the country, and made Kimchi from scratch. His desire to learn the language was fueled by his desire to communicate well with the people around him to experience as much Korean culture as possible – and it seems like it worked!

Tyler Rasch is a true lover of language. He not only speaks Korean well – he is fluent in six languages! Born and raised in America, Tyler went to the University of Chicago and moved to Korea to pursue a Masters in Political Science from Seoul National University. While he is in school, he also appears on TV shows like Non-Summit and models for brands like Yoplait and Subway.

Tyler started a webzine called Seoulism and a Youtube channel where he speaks about his experiences living in Korea so far. Though he studied Korean before making his move to immerse himself in Korean culture, it’s clear that he has a natural aptitude for learning new languages. No wonder he’s studying political science – communication is key to diplomacy!

Remember, the first step to being as fluent as these foreign speakers is to be able to read Hangul, the Korean alphabet. If you can’t read Korean it is possible to learn Hangeul in just ninety minutes, so what are you waiting for?

Who do you think is the best Korean speaker on this list? Let us know in the comments below!