Korean address – General format and how to write one

Having an idea of Korean address can come in handy. Especially when you would like to send mail to someone you know living in South Korea or your loved ones are hoping to send you a care package while you’re in South Korea. 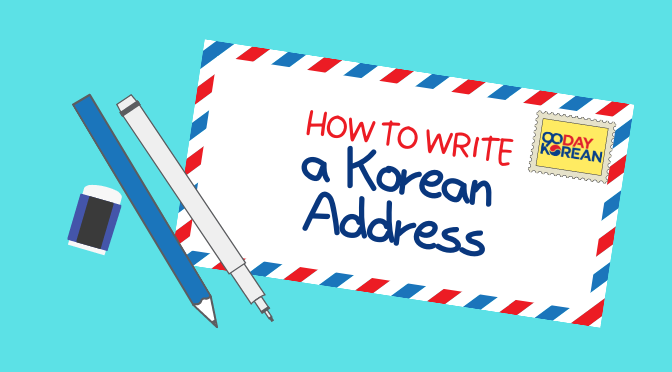 How to Write a Korean Address

If you stay in South Korea and send mail to someone else in the country, you’ll also want to know how to write the address in Korean first before sending anything out. Writing a Korean address can seem complicated or intimidating at first. It is of great advantage to check out an article like ours for some assistance.

Regardless of whether you are sending a package or a postcard, you will similarly format the address. Typically, you are expected to include your information on each mail item – aka sender’s information. The placement of this generally is in the upper left corner. Essentially, you are writing two addresses each time for the sender and the receiver.

In the address format, you’ll first write the name. This applies to both the sender and receiver’s information. For Korean names, the family name should come first.

Finally, below the address, you will add the postal code. They used to be six digits, but only five are now used under the new address system.

Other relevant information on Korean addresses

On top of the format of writing Korean addresses, below is other helpful information that you should note.

The information above shows the new system of writing an address in South Korea, which has only been in use for a few years. In the previous system, you would include the area within the district, but that is no longer necessary. Instead, you will use the names of South Korean streets, as displayed above.

Due to this change, buildings were designated with new building numbers, which has been received with some negative reactions from Koreans. However, especially for us foreigners, it makes navigating South Korea much easier.

Both address systems are still in use, so you will still see addresses written using the old mail system. Your mail may still go through even with the old address system but try your best to rely on the new format of addresses in South Korea.

There are three different road designations in the address system used in South Korea.

대로 (daero) is designated for the biggest streets in each city where the big roads are.

The next one is 로- (ro-), designated for roads or streets smaller than 대로 (daero). These roads usually have 2 to 7 lanes.

Lastly, roads designated as 길 (gil) are typically the smallest of the bunch having only one lane. This often branches as smaller streets off a bigger 로- (ro-) designated street.

An apartment or officetel is a typical building in South Korea. If you are sending mail to someone living in multistory buildings like these, you also need to know and write down the floor number and the apartment or suite number. Just writing down building numbers isn’t enough.

So, for example, if someone lives on the 6th floor, in apartment 33, and the building number is still the 114, as presented in the example above, then the written address would look like this:

What about if the address looked like this instead?

In this case, the building is located on a street, branching off a bigger street that’s too short to have its own street name. All of the buildings on this small street probably have the same building number, 33 in our example, and a separate number follows the hyphenation.

Example of a Korean address in Korean

Before learning how to write Korean addresses, it’s best to learn the Korean alphabet first to help you understand the process better. This way, you can easily write not only addresses but also other Korean words, phrases, and sentences. Here is an example of a South Korean address written in the Korean language. We have also included its Korean romanization below.

Example of a Korean Address in English

And here is how you can write that address in English. It will be useful to know if you are sending or receiving mail from abroad. You can also use this within South Korea, but mail carriers will find the receiver much faster if you write it in Korean.

Understanding the concept of Korean addresses may be a bit difficult at first. We’ve added some resources below that you can use if you need to write down or locate a Korean address.

To help you become more familiar with Korean addresses, you can use this tool to generate random addresses in Korea.

If you have the address details in Korean, you can run it in this Korean address converter to know how it is written in English.

The generated information also includes the land lot, zip code, and the exact location of the address on their map.

The following are important details to know regarding writing addresses in South Korea. They will also teach you how each city and town in South Korea is constructed. Note that not all of the below information is required to write each and every address.

Here are some sentences that you can use when talking about addresses in South Korea.

Now that you have learned about writing South Korean addresses, you are well equipped to start sending out mail! You can also start sharing your address with others so that you can also receive mail! Next up, maybe you would like to know how to survive a trip to a Korean bank using Korean?