Do you know the different Korean music genres? As a big part of Korean culture, by now, you all probably know exactly what K-Pop is and might know several K-pop artists or K-pop idols. Undoubtedly, you probably even have a playlist filled with all your favorite K-Pop songs. 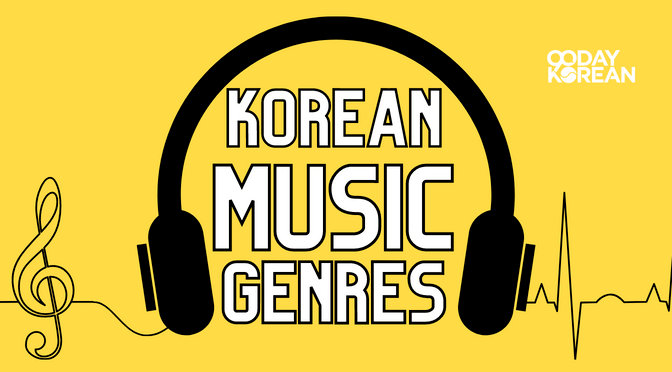 Korea has a diverse music scene outside of the most popular idols you may hear on the radio and in mainstream media. If you’d like to know more about these other music genres, then we urge that you keep reading further.

What are Korean Music Genres?

Just like with movies, music also falls under several different genres. A piece of music is given a genre based on some musical elements it contains, which is distinguishable from another genre.

Typically a musician or a band has a specific genre they make music for. However, it is not uncommon or impossible for a song or an album to include influences from multiple different genres.

For example, South Korean popular music is heavily influenced by other genres within its music scene. One of the most notable ways you can see this is many of the idol groups contain one member specializing in rap, while rap is also its own genre of music.

Similarly, with each group having its own song style set to distinguish them from other groups, one group may lean more towards the rock genre while another group’s songs may lean more heavily toward electronic sounds.

Besides pop music, you can typically find the following music genres: ballad, hip-hop, r&b, indie, rock, and trot. There are also many subgenres of traditional music. Next, let’s take a closer look at each music genre!

Although in many other music scenes, ballads are considered more of a musical style, in South Korea, it is its own genre. Numerous artists have made impactful careers in Korea by singing ballads only.

The majority of the songs have to do with love and relationships. They can be songs confessing love, or they can be songs about hurt after a breakup. For example, Park Hyo Shin and Im Jae Beom are incredibly popular Korean ballad singers. Korean ballad songs can fit seamlessly together with pop, rock, and even trot music genres.

Besides just being featured in K-Pop songs, hip-hop has grown into a big genre in South Korea, with artists such as Simon D, Epik High, Dok2, Jay Park, and Zico. It’s been around since the 1980s but only started gaining mainstream attention in the 2000s and especially 2010s, with shows like Show Me the Money and Unpretty Rapstar.

One defining element of this genre is the mix of Korean and English in the lyrics, often appearing even in corresponding rhymes.

Among the different music genres in South Korea, R&B may be a smaller one. Much like hip hop, R&B also originated in the African-American community and then crossed over to the Korean music scene upon gaining mainstream popularity in the USA.

R&B mixes multiple genres into one, from rock to soul, distinguishable often by a heavy beat in the background music, although contemporary R&B may sound quite different from the original sound. Some popular R&B artists in Korea include Dean, Sam Kim, and Lee Hi.

Korean indie music can essentially mean any artist or band that is not signed onto a big label. Their actual musical genre may align with rock or contemporary Korean folk music, although of the two, rock is far more popular.

At the center of rock is the electric guitar, and drums and bass also play an important part. Alongside pop music, rock music is perhaps one of the most diverse music genres.

This genre has been introduced to Korea by the U.S. soldiers who remained at the U.S. military bases in South Korea after the Korean War.

Korean trot music can actually be regarded as a subgenre of K-pop music. It is known for its repetitive rhythm in the songs, and its name originated from the foxtrot, although the two share very few characteristics.

As trot is not so popular these days, typically, trot singers mainly perform pop songs. For example, popular K-pop singers such as Daesung and Leeteuk have performed trot songs before.

Traditional Korean music has long roots in the history of the Korean Peninsula as a whole and is and will always remain uniquely Korean. However, contemporary music genres may draw more of their influences from elsewhere. Despite that, Korean music is usually quite identifiably Korean.

First of all, in many Western music scenes, many artists record songs in English rather than their native language. However, in Korean songs, English only presents a part as lines or words in songs, while the rest of the lyrics are in the Korean language. This typically is only within K-Pop.

Additionally, Korea’s idol format in popular music is another distinguishable factor in Korean music. Of course, Korea’s history and culture are other driving forces in shaping Korean music.

Korean music also has a lot of what is called “lyrical sensibility.” While Koreans may otherwise somewhat refrain from showing their emotions, Korean music instead is full of emotions and expressing them.

What are the influences of Korean Music?

Korean music has been widely influenced by various music from Western culture. Many of the music genres you can hear in Korean music today originated from other countries, although Korea has put its own spin on everything.

All of the different music genres in Korea have also largely influenced the K-Pop industry. It has made the industry quite interesting, as you can hear every genre presented within Korean pop culture.

With today’s internet culture, you can easily find foreign songs like Korean songs simply by watching a YouTube video. Search for the song titles, watch music videos, and the next thing you know, you’re on the lookout for songs leading the pop charts!

And there you have the most common music genres in Korea! What kind of music do you like to listen to? How familiar were you with these music genres outside of K-Pop? Let us know below in the comments!

If you’d like to know more about different K-pop groups (boy bands and girl groups), we have a dedicated article for it here.