We’ll tell you what to expect, along with some do’s and don’t’s in Korean dating. Let’s make sure your romantic life is a success!

Read on to find out more about the dating culture in South Korea. 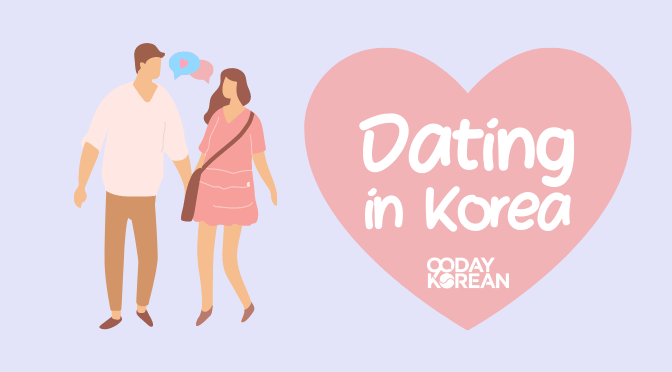 Below is a free PDF guide for “Korean Dating” that you can download and take with you:

As you’ve already heard, Korean dating culture can be rather different from what you’re used to back home. This is especially true if you come from a country outside of Asia. Maybe you’re cautious and want to get more information on Korean dating before going for that cute woman from the cafe or that hunky guy at the bookstore, so you’re up to date on Korean culture.

After all, Korea does seem to have some specific quirks when it comes to dating men and women. Though they are by no means reasons to run away from the life of Korean dating. Instead, they might make Korean dating even more fun!

So what exactly can you expect in Korean dating? If you’re excited to meet Korean singles, read on!

How do people meet each other in Korea?

Like in every other country around the world, there are various ways you could come across your next bae. They could be your classmate from school or your co-worker or a Korean friend. Or they could be someone you met while out at a bar ringing on the weekend or someone you met through language exchange. Or perhaps your Korean dating was initiated when you two ran into each other, and they accidentally spilled their coffee all over you. However, there are ways of meeting people specifically for Korean dating.

The best Korean dating sites might lead you to your perfect match. Korean dating apps or online dating are the common options in meeting people to date, especially in these modern days. There are actually infinite ways to meet Korean singles, and not only through an online Korean dating site.

Apart from using a Korean dating site, one common way for Koreans to form relationships that seems to surpass the others: to meet Korean singles through friends, the specific term for this being “소개팅 (sogaeting).” This way, you’ll already have at least one reference, going into dating them, that they are a decent person, approaching you with earnest intentions.

The downside of Korean dating through this method is that you can’t be too sure how much the possibility of the compatibility of you two has been thought out, besides the fact that you’re both single. However, if you’re single and ready to mingle, don’t be scared to ask your friends to set you up! Even if it amounts to nothing, it’ll still be fun to experience in your life. Perhaps you will meet Korean singles or new friends and have another familiar face to say hi to when you’re out on the town.

Who foots the bill?

Now that you’ve met someone you seem to be mutually interested in, the time to go out on a date has come. You’ve both dressed up nice – as is also the custom in Korean dating, at least for the first few dates if you really want to impress someone – and you’ve planned out some fun activities. But right before the start of the date, or perhaps during it, you’re left wondering: who pays? Although the times are changing, and especially the younger, school-going folks in their early twenties tend to split the bill, at least at the restaurant, it is often still the unspoken custom that the man should pay on the first date, and perhaps on the next few that follow. In some instances, especially on the first date, the man might pay for the whole lot of it, while on others, he’ll pay for the first round, the girl the next, and so on. As you get to know each other better and become an official boyfriend and girlfriend, the paying should even itself out.

How affectionate can we be in public?

You’ll likely want to save your make-out sessions and the like for private, or else you’ll find an 아줌마 (ajumma | older Korean woman) raising a storm on you. Otherwise, nearly everything seems to be fair game. Everywhere in South Korea, especially in Seoul, you can see Korean women and men holding hands, having their arms around each other. Some even dare to share small pecks, and sometimes you may even see them squeezing each other’s pimples and whatnot.

PDA in Korea vs. PDA in the West

In Korean dating, the level of PDA acceptable in South Korea may surprise you – in ways, and it’s a lot less steamy than what you might see in public in Europe or America. Still, simultaneously the couples in South Korea are much more in your face and obvious about their relationship status in public.

Rules of communication in Korean dating

In the West, you may have heard of the 3-day rule, but you are making a grave mistake if you think that applies in South Korea as well. It may be taken as a sign of disinterest in Korean dating if you’re not already contacting them right after the date to let them know you had a good time!

In comparison to what you may be used to, in general, Koreans like to communicate with their boo much, much more often, throughout the day, from good mornings to good nights. They might not be the most riveting conversations, but it seems important to show you care by asking them various times during the day what they’re doing, whether they’ve eaten, did they get home safe, and so on. Korean dating signs you get from communication

If the person you’re dating is not texting you that much, it may or may not be a sign of disinterest towards you. This, of course, doesn’t consider everyone as some people are naturally the type who doesn’t like to spend so much time on their phone, no matter how infatuated by you they are.

However, if the person you’ve been dating suddenly contacts you drastically less, it very well may be that they’re losing interest but don’t know how to say it to you, out of fear of hurting your feelings. It may not be how you’re accustomed to handling a situation, but it is normal among Koreans. Of course, instead of jumping to the worst conclusion, it may be to your benefit to discuss with the person you’re dating or in a relationship with other possible reasons behind their lack of communication. Although frowned upon by Koreans alike, it is also normal to sometimes simply “ghost” someone (cease contact without explanation) at the beginning stages of Korean dating if the interest happens to fizzle.

Other peculiar aspects to Korean dating

The peculiarities of the Korean dating culture don’t quite end there. One part of the local Korean dating culture that you may find especially fun – or especially annoying – is all couples do together. Unlike in the West with just Valentine’s Day for couples, Koreans have additional huge couples’ holidays like White Day, Pepero Day, and even Christmas. On top of this, the 14th of every month is a small holiday for couples, with a specific theme for every month.

Another aspect of Korean dating that could be fun for you to experience is all the couples’ items. From rings to shoes to whole outfits for “couple looks.” It’s up to you and your partner to decide how subtle or wild you want to get with this!

Dating is a great way to experience Korean culture, in this case, Korean dating culture. You get to become close with new people, and while you enjoy spending time with them, you’ll also get to experience Korea through their eyes. Whether it’s checking out your new companion’s favorite off-the-beaten-path restaurant in the city or visiting a part of South Korea you didn’t know existed, you’re bound to have a great time if you find yourself dating while you spend time abroad.

Before you ask out the next Korean women or men you see, let us help you familiarize yourself with Korean dating culture. There are definitely some ins and outs of Korean dating that you should know beforehand, and they’ll help you steer clear of any social faux pas. Read on for our tips, and happy dating!

If you’re dating in a country other than Korea, you’re probably familiar with the “three-day rule.” This rule says that you shouldn’t reach out to someone you’re newly interested in via text or phone call for at least three days after getting their phone number. This rule has been a focal point of romantic comedies and sitcoms for the last decade, and some men and women swear by its effectiveness.

While you’re in Korea, throw the “three-day rule” out the window if you don’t want to ruin your chances with the new cutie you’re trying to talk to. Koreans are generally glued to their smartphones and love instant messaging, so if you choose not to reach your crush, they may take it as you are not interested.

Furthermore, if your crush reaches out to you via text or IM (which they will, and often!), if you don’t respond for a couple of hours because you aren’t checking your phone, they will more likely than not think you are rejecting them.

Keep your phone on you, and don’t be afraid to show your affection with emoticons! Your crush will thank you for it.

In Korean dating, you’ll likely notice that your significant other won’t be open to intense displays of affection in public.

In South Korea, passionate kisses and lingering hugs are considered tacky and inappropriate when they occur in public. Rather, they’re seen as special, romantic moments that should be shared with your partner in a private setting.

Although you won’t see many kisses while you’re venturing around Korea, feel free to hold your date’s hand or put your arm around them — these are both considered appropriate displays of affection and can make you feel closer to your date throughout the evening.

Korean Language vs. the English Language

Korean women and men have been studying English since they were young. Even if they aren’t strong speakers, almost all of them will understand basic English. With that being said, you can make your Korean dating experience a lot smoother if you can use at least a bit of Korean. Here’s a great spot to start: https://www.90daykorean.com/learn-korean/

All in all, we hope and expect you to have fun if you choose to date while living in Korea. You could experience so many great things by having a partner here; however, your life will be fun and fulfilling even without one!

With this information about Korean dating, you might be interested in a Korean dating site for men and women. We have a separate post on Dating a Korean Girl – Top meeting tips you should know that have a topic for that.

What do you find interesting or peculiar about Korean dating? Are you interested in checking out an online dating site? Hopefully, you can find your perfect match to share Valentine’s day with through these tips! Share your tips and experiences with us in the comments below!

16 replies to "Korean Dating: Customs and etiquette for relationships"