Korean punctuation may already look familiar to some of you, especially if you come from an English-speaking nation.

In this lesson, we will quickly and simply go over some of the basics of punctuation in Korean writing. 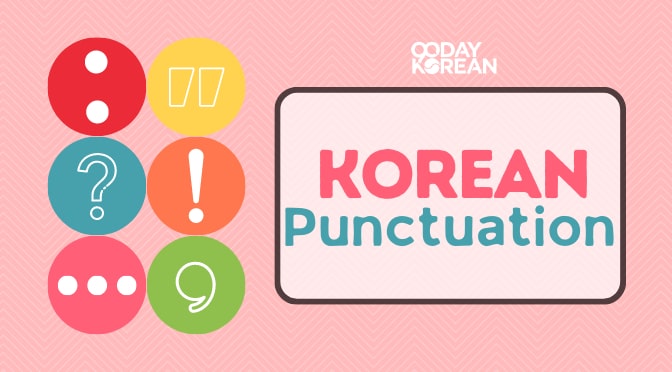 If you’re planning on composing something in Korean, from school essays to anything else, it is good to familiarize yourself with the punctuations used in Korea, just to be sure you’re on top of it.

This is a part of Korean grammar that isn’t typically taught in the lowest levels, so knowing these early on as you learn Korean may even be advantageous to you.

As you read on, we’ll teach you the commonly-used ones you’ll encounter as you learn Korean. Know their differences from each other and how to use them. We’ve added the Korean romanizations of words and phrases in the examples for easier reference if you’re still new to learning Korean.

In Korean, there are two purposes to using periods. The first one is to note the end of a sentence. The second is to use abbreviations and dates.

Example 1: At the end of a sentence

With dates, the period is specifically used when you write the date by using numbers only. The use of periods in the Korean language seems largely similar to how it’s used in other languages, too.

The Korean word for the punctuation mark “period” is 마침표 (machimpyo).

A comma is used in multiple instances in Korean, in similar ways to many other languages. It can be used in a paired sentence, to list correlated things, or to alternatively separate items from each other.

A comma can also be used to separate clauses within a singular sentence, as well as to reduce phrases that are recurring. Additionally, it can be used after spoken phrases and answers, and after some vocabulary that would otherwise end a statement.

Example: to separate clauses within a singular sentence

The punctuation mark “comma” is called 쉼표 (swimpyo) in Korean.

This naturally marks the end of a question. It can be used for any kind of questions, it doesn’t have to be used only when presenting direct questions.

However, if your sentence has more than one question in it, add the question mark only once, at the very end.

Example: Used at the end of a question

What time is it now?

Whenever you want to make an exclamatory statement, finish it with the exclamation mark. This includes sentences that express being surprised, commands, shouting, remarks, and also expressing perfection.

Example: To make an exclamatory statement

Just like in many other languages, these quotation marks are used to mark spoken words as well as dialogues. It can additionally be used to mark a quoted speech. In addition, they are used to represent different animal sounds.

Example: To mark a quoted speech

These are used to mark a specific quoted phrase within a quote, as well as to mark one’s thoughts. You can also use it in a conversation to indicate indirect or reported speech by another different speaker. You can just use it to emphasize certain words or a conversation.

This one has two uses in written Korean. It’s used to either express the speech trailing off or when there is silence in speech.

Example 1: To express the speech trailing off or when there is silence in speech.

Example 2: When there is silence in speech

If that were me…

The colon can also be used in two different ways. First, it can be used to introduce the different parts of a list.

For example, when you are writing about an event, you may use the colon to introduce each separate item like location, date, and so on. You’ll also use the colon to separate hours from minutes when indicating time.

Example: When writing about an event

In Korean, the punctuation mark “colon” is called 쌍점 (ssangjeom).

Continuing the trend of having two uses, tilde can be used to express a time period or to indicate a distance. In the English language, it would translate as the same meaning as “from X to Y”. But in writing, you can simply use tilde to express the same.

Example 1: To indicate a distance

How much is the train ticket between Seoul and Busan?

Example 2: To express a time period

The average driving time is between 2 hours and 30 minutes and 50 minutes.

The punctuation mark “tilde” is called 물결표 (mulgyeolpyo) in Korean.

With a slash, you can indicate the “per” of measurements such as price, speed, and other similar ones.

Example: To indicate price per unit or person

In writing, parentheses are used to either include additional information within a text or to provide the original word for loan vocabulary taken from other languages.

Example: To provide the original word for loan vocabulary

Sungnyemun Gate is one of the four gates of Seoul.

Lastly, we have the middle dot. This isn’t as widely used among different languages, and it is a recent addition to grammar rules, too. By using this middle dot, one can make lists of similar things, or mark significant dates, such as national holidays.

And that’s it for the punctuations marks in Korean. Hopefully, this helps you as you practice writing in Korean!