How to say “How are you” in Korean – A common greeting

In this article, we’ll teach you how to say “How are you” in Korean. This phrase, along with “How are you doing,”  is probably one of the most used conversation starters, and it’s great to learn them in any language.

Today, we’ll show you the different ways to say “how are you?” in Korean! The way you ask this question isn’t an exact translation of its English counterpart, but you’ll notice that with many phrases as you learn Korean. Don’t worry, we’ll explain the nuances so you can understand how to speak appropriately using these Korean phrases in a conversation. 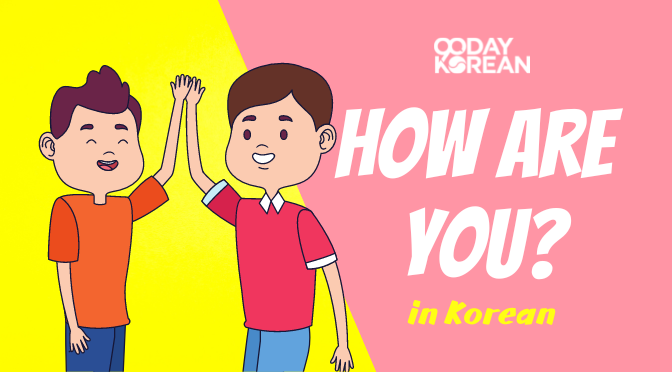 As usual, we’ll cover the formal, standard, and informal versions of the question. Then we’ll give you some bonus Korean phrases at the end of this post. We also have a FREE PDF guide that you can take with you on the go. Check it out below:

If you can’t read Korean yet, go here to get your free guide. Let’s jump right in!

“How Are You” in Korean

There are several ways to say “How Are You?” in Korean, and they’re not necessarily direct translations of the English version. These include the following:

We’ll discuss each one below.

Different ways to say “How are you” in Korean

Before we head on to that, you can watch this video that shows How to Say “How are you” in Korean:

“How Are You” in Korean (formal)

The formal phrases below are the different ways to ask “How are you?” when you speak to people higher in the social rank than you or people you’ve just met.

You could use the formal version with professors, teachers, bosses, the president, people much older than you, or someone you don’t know well that is similar in age to you.

“Have you lived well” in Korean

One way to ask “how are you?” in Korean is to say 잘 지내셨어요? (jal jinaesyeosseoyo) which means “have you spent your time well?” or “have you lived well?” You can answer this with a “yes” or a “no.”

The important words to note here are:

지내셨어요 = jinaesyeosseoyo | to spend time or live (formal past tense) “How have you been” in Korean

It’s a great question to ask after you greet someone. Some ways to answer this would be by providing an explanation rather than a yes/no reply.

The important words to note here are:

“How Are You” in Korean (standard)

If you were going to learn one version of how to say “how are you” in Korean, then the standard would be the way to go!

That is because it is the most versatile and can be used with the largest group of people. Normally, you’d use this level of formality with people that are similar in age/rank as you, but you may not be on close terms with.

Since you’re learning Korean as a second language, most Koreans would forgive you for using the standard form if you’re supposed to use the formal.

Learn the standard version first, and then make it a point to learn the formal next. You’ll be sure to make a good impression on the people you run into again and again.

“Have you spent your time well” in Korean

You can say 잘 지냈어요? (jal jinaesseoyo) to ask “how are you” in standard form.

지냈어요  = jinaesseoyo | to spend time or live (standard past tense)

“Have you been well” in Korean

잘 있었어요? (jal isseosseoyo) is the same as asking, “have you been well?” Use this with coworkers or acquaintances in your hiking club.

“How’s it going” in Korean

To find out how’s it going lately for your next-door neighbor, ask “어떻게 지냈어요 (eotteoke jinaesseoyo)?” 지냈어요  = jinaesseoyo | to spend time or live (standard past tense)

You may start to notice that some of these words are the same or similar. That’s why it pays to learn the most common Korean words first, they’ll keep appearing over and over. This is what you should start with.

“How Are You” in Korean (informal)

The informal version of “how are you” in Korean is used with people who are lower in social rank than you. An example might be a small child or someone much younger than you who you’re on familiar terms with.

You can also use the informal version during a conversation with close friends that are similar in age, or with spouses/significant others. If you’re unsure as to whether or not to use the informal, ask the other person if it’s ok to use 반말 (banmal), which is the word for informal Korean.

지냈어  = jinaesseo | to spend time or live (informal past tense)

If you meet a close friend who you haven’t seen in a while, ask “잘 지냈어 (jal jinaesseo)?” If you’re a university professor, you might use this with students who used to be in your class that you run into.

지냈어  = jinaesseo | to spend time or live (informal past tense)

Use “어떻게 지냈어 (eotteoke jinaesseo)?” to ask your hometown friend how he or she has been.

“Have you eaten” in Korean

Another way of asking someone how they are is by asking if they have eaten already. 밥 먹었어요? (bap meogeosseoyo?) means “Have you eaten?” in Korean. Koreans will often greet each other by asking if the other person has eaten. It doesn’t necessarily mean that you’re asking if they’ve literally eaten food.

It’s more often used to show that you’re interested in the well-being of the other person. Therefore, you can use this phrase to ask, “how are you?” in Korean. Since this is in standard form, you can use it with people who are on the same level or lower than you in the social hierarchy.

Here are some examples of how you might use this in conversation:

You wouldn’t use these phrases with someone you met for the first time—it would sound a bit strange! Make sure to use them with people you’ve already met, such as friends, classmates, or coworkers.

Now that you know the different ways to say “how are you” in Korean, it’s a great time to get out there and get some practice! And pick up some other Korean phrases while you’re at it! With these phrases, you can also practice and create your sentences. Make sure to check out the article on Korean sentence structure to learn its basics!