“When” in Korean – A question word and a conjunction

This article will specifically focus on how to say “when” in Korean and how it can be used. Although we have already covered different Korean question words briefly previously, in this and a couple of other articles, we would like to dive deeper into how each term for questions can best be used. 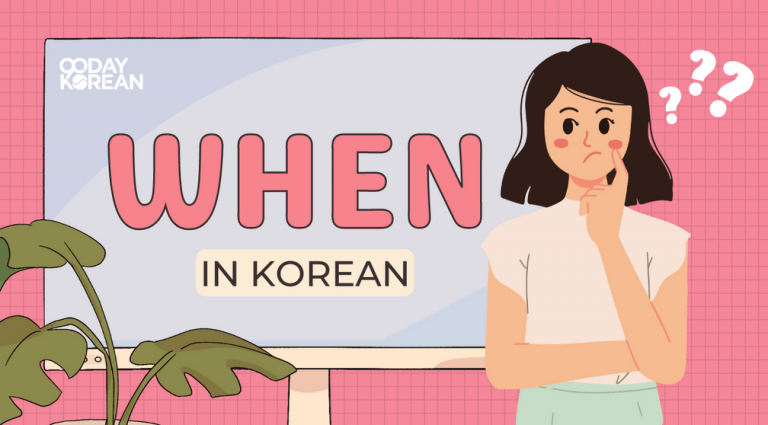 How to Say “When” in Korean?

The usage of “when” in Korean may be different from how you are accustomed to using it in your language, especially in comparison to English. It can be used to ask a question in rather similar ways that you are already familiar with.

However, the Korean word in use may change when it is used as a conjunction and to make a statement. But do not worry, we will go over all these useful words in more detail below!

How to Pronounce “When” in Korean?

When used to ask a question, the term for “when” in Korean is 언제. The romanization of this is eonje. Do remember that romanizations are a useful tool but not perfect for expressing the pronunciation of Korean vocabulary.

Instead, you will want to learn and memorize the Korean alphabet, as well as know the different rules for Korean pronunciation.

“When” in Korean as a Question word vs. “When” as a Conjunction

“When” in Korean can either be used to ask a question or as a conjunction. However, different Korean terms are used for them. We’ll differentiate them both below.

“When” in Korean as a Question word

When you are using “when” for asking a question (언제), you can simply place it wherever it fits best in the sentence. Typically this is at the beginning, but sometimes a different placement may be more suitable. Like this:

When do you want to eat dinner?

Note that the Korean term 언제 (eonje) does not change regardless of the tense used. You can make a sentence using the present tense and then change the tense to past tense, and 언제 (eonje) will stay the same.

And yes, while in English you may not use “when” so much for tenses other than present tense, in the Korean language, it is normal to use it for past tense as well. It also works with future tense! However, in the case of future tense, the Korean word 언제 (eonje) may be preceded by the time expression signaling the future.

Also, it can be quite common to simply use the present tense when making questions for the future.

Here are some example sentences you can start utilizing for questions with when:

“When” in Korean as a Conjunction

How about for situations where “when” is not used for Korean questions? In this case, the term 때 (ttae) may be used. This form is more of conjunction, preceding the word that determines when exactly.

Another word related to “when” in Korean is “whenever.” There are two words that you can attach to the verb to say “whenever” in Korean.

Whenever I come to school, it rains.

My boyfriend calls me whenever he misses me.

Whenever I meet my friend, I feel good.

Bring it to the store whenever you want a refund.

Common ways to answer “When” in Korean

Below we will show you some simple examples with which you can better understand how to answer questions using the word when. Typically the expressions used are related to time, so right now, it may be useful to you to also learn the different Korean time expressions. Here are some example sentences.

Additional words for answering “when” in Korean

In addition to the sentences above, here are some of the phrases that you can use to answer the question “when” in Korean. You can also refer to the articles on Korean adverbs of time and Korean time expressions for other words to use in response to 언제 (eonje).

Now you should be able to say “when” in Korean for both asking questions in Korean as well as making statements. Perhaps you’d like to practice immediately in the comments below? For more Korean exercises with us, maybe you’ll next challenge yourself with some useful Korean worksheets.