Korean calligraphy – The written art in the peninsula

Korean calligraphy is an ancient and exquisite art form of writing, originating from Chinese calligraphy, and has become a cherished Korean art form over time. This traditional art form is highly appreciated, and people enjoy looking at calligraphic art pieces as well as creating them even today. 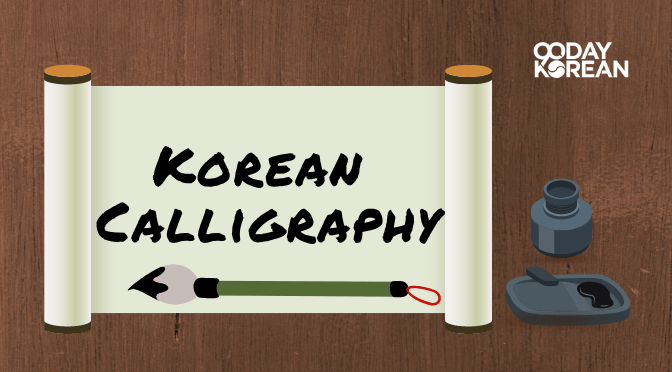 Calligraphy in Korea, in all its forms, has a long and interesting history, and you can read all about it in this article!

Here’s a downloadable version of this article:

What is Korean calligraphy called?

“Calligraphy” in Korean is called 서예 (seoye). Hangeul calligraphy, contrary to Chinese has a simple but strong beauty. However, in its original form, Chinese characters were used. Since then, Korean or Hangeul calligraphy has evolved into using Hangeul letters as well.

To talk about Korean calligraphy, you may want to also memorize the below list of words related to the topic.

If you’d like to learn more vocabulary in Korean, we have articles focused on Korean words and phrases.

Do Koreans use calligraphy?

Yes, Koreans view calligraphy as a highly regarded form of art and highly technical art of writing which is part of the Korean tradition. Moreover, in Asian cultures, creating calligraphy is seen as an act of discipline, as something one does to train their mind, and is much more than just a technical exercise.

Therefore, giving someone a piece of calligraphy created by someone as a gift is seen as a respectable act. In fact, it can be seen as the gift-giving person regarding and loving the person they are giving the gift to highly.

What is Korean calligraphy used for?

Western calligraphy focuses on writing down the letters clearly and places high regard on their aesthetic beauty. On the other hand, calligraphy in South Korea and other Asian countries isn’t. Here is what calligraphy is for in Korea.

The goal of Asian calligraphic works is to use the shapes of the letters and characters as a way to express the emotions of the calligrapher. In fact, it can be perceived that Korean calligraphic works reveal the creator’s personality. And as you may have guessed, it takes several years of practicing this art to master this ancient tradition.

Calligraphy can also be seen as a way to express the beauty that Korean letters and Chinese characters contain in their everyday appearance. Calligraphy is in some ways like the cursive script in Roman alphabetic languages. However, its application goes deeper than that.

With calligraphic works, the emphasis isn’t only on the characters themselves. A lot of thought goes into each work, not only into how to draw the characters but also the composition of each dot and line and even the empty space’s positioning.

Korean Calligraphy is combined with other forms of art

Historically, Koreans have also used calligraphy in combination with painting. They see both styles of art as a great form of training the mind. Old aristocrats and especially scholars sought to also master their skills in poetry, in addition to calligraphy and painting. They saw these as the perfect trinity of skills to master.

Besides both calligraphy and painting being seen as equally great tools for mastering one’s mental state, they have another thing in common. Both of them have a similar technique and application, and that is another reason why they are common to practice together.

Chinese Calligraphy began to be used in Korean society during the period of the Three Kingdoms. That would mean from between 57 BC to 668 AD.

Who created calligraphy in Korea?

Calligraphy in the Korean style was developed by ancient Koreans, who were fascinated by Chinese culture. They drew from Chinese characters and calligraphy styles and made their own style (Korean version) based on them. Few inscribed stone monuments remain to have calligraphic inscriptions that still exist today from this time period.

During the Unified Silla dynasty’s time, calligraphy continued to flourish in Korea. Some notable calligraphy artists emerged in Korea, named Kim Saing and Choe Chi-won. Both of them took a lot of inspiration from Chinese calligraphers Ouyang Xun and Yu Shinan, and their Tang dynasty culture-inspired styles. Some works from this time period have been preserved.

The calligraphic squarish style embraced during the Unified Silla Dynasty continued to be used during the period of Koryo. However, just before the end of Koryo, around 1350, a Chinese calligrapher by the name of Zhao Mengfu came up with a new, more rounded, fluent style of Chinese character calligraphy. The Korean calligraphers then took on the Zhao style as well.

Korean Calligraphy in the 16th century

To this day, this style greatly influences Korean calligraphic works. However, in the 16th century, a more vulgar style began gaining more popularity among artists as well.

The most prominent calligraphic artist of the Joseon period – so between 1392 and 1910 – was Kim Chong Hui. He was the creator of a popular style of calligraphy, called ch’usa. This, too, is derived from Chinese calligraphic styles, the Chinese Iishu script to be specific.

However, Kim Chong Hui added a lot of his own personal touches to it. This included the composition and asymmetry in his works, as well as the forceful strokes of each character and letter. To this day, this is one of the most popular styles used in Korean calligraphy.

On one last note, Hanja (Chinese characters) was used as the official script and for calligraphy. This form of writing was prevalent during this period since, in the 2nd or 3rd century, there was no Hangeul yet. This was used all the way until the Japanese occupation in 1910.

Only after that did the native Hangul alphabet become the official writing system and the main way of illustrating calligraphic works. This happened when North Korea and South Korea split. However, using Hanja calligraphy is still popular today.

Many calligraphy enthusiasts enjoy Hangeul Calligraphy for its simple and restrained beauty. It is constantly being developed, with increasingly more attempts to create new fonts and artistic writing styles.

What are the four basic tools used in Korean calligraphy?

In order to create a proper calligraphic piece, each artist must have four integral tools at hand: paper, brush, ink stick, and ink stone. In the Korean language, they are referred to as 문방사우 (munbangsawoo), which translates as “four friends”. Each item was a typical find in the studies of Korean homes in older times. 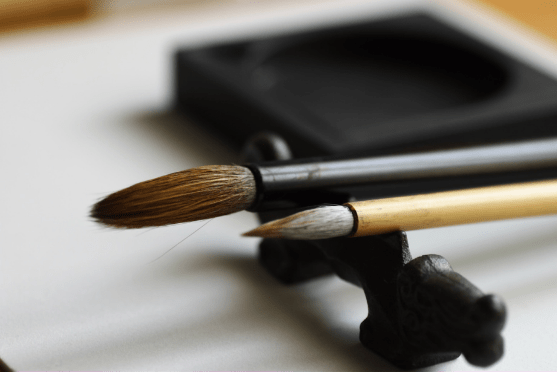 The paper used in calligraphy is required to be traditional hanji paper, aka Korean mulberry paper. This is because it absorbs ink excellently while reflecting the colors vibrantly.

The brush, on the other hand, must be straight. Its tip should be sharp and made out of animal hairs, with each strand the same length as another.

As for the ink stick, it is made by mixing the soot from burned trees and glue. A good ink stick should also be firm and fine in its composition.

Lastly, the this tool should also be made from a firm stone and has to be the kind that does not absorb water.

These four tools are the basics someone must have to get started. Several other tools are usually required for a masterpiece to be created such as yeonjeok which is a container for the water used to grind the ink stone; boot tong, which is a container that holds brushes; munjin which are long and flat paperweights, and the pilse which is a bowl used to wash the brush.

Can calligraphy be learned in Korea?

Yes! Korea has plenty of areas where calligraphy classes are offered. Learning calligraphy is an activity often enjoyed by foreign embassy members that operate in Korea. Calligraphy competitions are also held yearly.

If you want to experience calligraphic practice in Korea, you can visit Namsan Hanok Village, which is located in Chonghak-dong. This area is preserved as an old Korean town. Calligraphy, along with Korean traditional music and poetry classes, is offered here. This village is the perfect place to experience traditional Korean culture.

Besides calligraphy in Eastern Asia, there are other similar ancient forms of visual art existing all over the world! Or perhaps you’d like to know more about Korean writing and the Hangul stroke order first.

If you want to try out creating your own Korean calligraphy art, try to look for classes. Even if you are not in Korea, there might be some available right in your hometown!