“Which” in Korean – Learn each word and how to use them

Learning how to properly say “which” in Korean can be an incredibly invaluable lesson to you. As three different words are used differently, you need to know each one to create natural-sounding and correct sentences.

Especially as you may already be accustomed to knowing a term or two of these as “what” in the Korean language, it’s most important to know how to use them to say “which.” 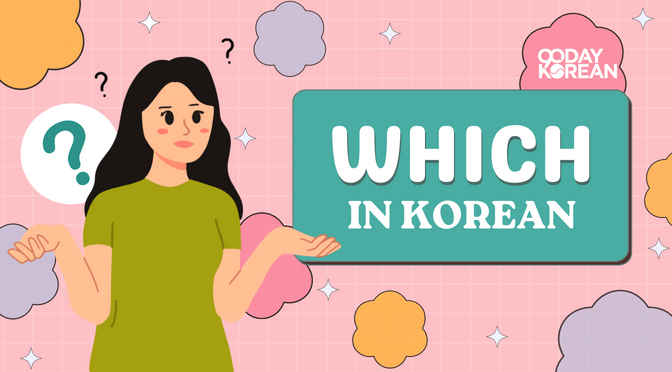 In today’s lesson, we will go over each term, how they are used, and how you can learn Korean in terms of writing and pronouncing them correctly. If you’d like to review the Korean letters first, we have a resource to help you learn the Korean alphabet in just 90 minutes! After this, you can come back to this article. If you’re all good, let’s get to it!

How to Say “Which” in Korean?

As mentioned in the introduction, there are three words with which you can say “which” in the Korean language. The words are as follows:

Each term is used in slightly different contexts, which we will present to you below. Therefore, you need to be careful when choosing which one among them to use. Especially 무슨 (museum) and 어떤 (eotteon) may feel confusing at first. However, don’t be afraid; it becomes easy to distinguish between the two with some practice.

How to Pronounce “Which” in Korean?

You can learn the pronunciation of each term by utilizing their romanizations which are presented in parentheses:

However, while beginner learners especially find romanizations useful, they may not be 100% accurate in presenting the pronunciation of a word. Therefore, we recommend that, before learning Korean vocabulary, you go over and learn the Korean alphabet, which shouldn’t take you much more than an hour!

It’s also useful to go over our guide on Korean pronunciation rules. This way, you will be able to masterfully pronounce words even when romanization isn’t readily available!

Now finally, we can get into the meat of the lesson and start going over the differences between each term for “which” in Korean.

Using 어떤 (eotteon) in a sentence

Firstly, besides meaning “which,” 어떤 (eotteon) can also be used to say “any,” “some,” “what,” or other similar words. In a sentence, it is placed before a noun and is typically used to ask about somebody’s or something’s characteristics.

For example, you can ask someone 어떤 책을 좋아해요? (eotteon chaekeul joahaeyo?), and in response, they will describe to you the qualities of a book they enjoy reading.

However, 무슨 (museum) can also mean “what” in addition to “which,” as detailed in the article for “what” in Korean. And, yes, you can also present the question as 무슨 책을 좋아해요? (museun chaekeul joahaeyo?).

So, what’s the difference? The difference and the choice between 슨 (museun) and 어떤 (eotteon) come from the speaker’s point of view. Are you familiar with the topic you are discussing? Then you use 어떤 (eotteon).

If the topic is new and unfamiliar to you, then you use 무슨 (museun). However, we understand it may take some time to get this distinction right. Hopefully, the next point will make it clearer to you how these words work.

For example, you may use 무슨 (museum) like this:

Which movie did you watch?

Which exam are you studying for?

In both cases, you are presenting the question because you do not know the details, i.e., what movie it was and what exam it is. However, there are multiple different possibilities, from “which” the responder has chosen one movie to watch or one exam to study for.

If you get nervous about which one to use, then remember that 무슨 (museun) can be quite generally used. Whereas with 어떤 (eotteon), it’s expected you already know something about what you’re talking about.

Also, as a response to 어떤 (eotteon), a list of qualities can be given, whereas, for 무슨 (museun), the response will more likely be the name of something.

What is your job?

Which school do you attend?

What is this taste?

And here are some sample sentences with 어떤 (eotteon):

What kind of person is your new boyfriend?

Now, having just mentioned that 무슨 (museun) can be used in a general sense, the third “which” term, 어느 (eoneu), comes in. The term 어느 (eoneu) has a quite specific use, especially in comparison to the other two words. Specifically, 어느 (eoneu) is used when there is a list of things to choose from.

Here are some sample sentences:

Which restaurant do you want to eat in?

Which movie do you want to see?

It cannot be used when talking about people. However, it can be used in relation to infinite things, such as days. More specifically, here are some ways you can use 어느 (eoneu):

To which degree were you surprised to meet with that person again?

Among these books, which one will you choose?

Wow, what a tough but educational lesson that was! Did you already know the Korean words for “which” before? Do you think you will be able to use them correctly now? If you have “which” questions in Korean, let us know in the comments! We’d love to see some sample sentences, too!

If your brain is not completely fried yet, perhaps you’d like to learn the other Korean question words as well. There’s “what,”  “who,” “when,” “where“, “how,” or “why” in Korean that you can learn more about. Happy studying!