Children’s Day in Korea – Everything You Need to Know

Children’s Day in Korea is an important holiday. On this day, South Korea celebrates its most-loved inhabitants: its children.

This public holiday (“red days”) is celebrated on May 5th every year in Korea. That means that salaried workers get a day off work, and children get a day off school. 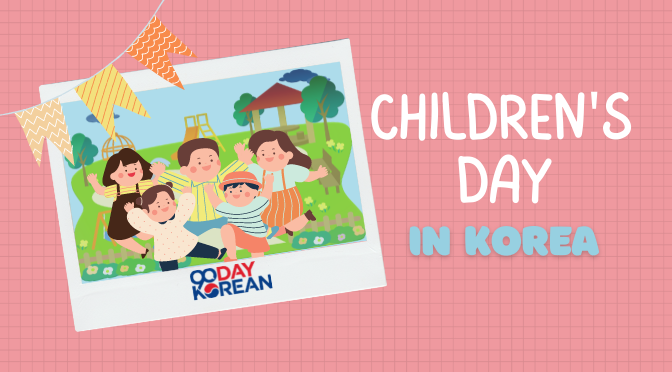 We’ll tell you everything you need to know about Children’s Day below.

What is the National Children’s Day in Korea?

Children’s day is a way for Korea to celebrate the children of the country. It’s an opportunity for parents to take a break from their busy lives and to spend quality time with their children.

How to Say “Children’s Day” in Korean

To say “Children’s Day” in Korean, you can say 어린이날 (eorininal). This word is made up of the word for children (어린이 | eorini) and the word for day (날 | nal). It is, therefore, easy to learn and remember. Children’s Day is a public holiday.

How to Say “Public Holiday” in Korean

The South Korean word for “public holiday” is 공휴일 (gonghyuil). Children’s Day falls on May 5th or 오월 오일 (owol oil) in Korean.

When is Children’s Day in Korea celebrated?

Children’s Day in South Korea is celebrated on May 5th. This date, 5/5, has a certain symmetry and is therefore easy for people to remember.

Although many countries worldwide have a day designated as “Children’s Day,” the dates vary from country to country. In the USA, Children’s Day is celebrated on the second Sunday of June.

On the other hand, Hong Kong celebrates Children’s Day on April 4th, and Brazil celebrates it on October 12th.

The History of Children’s Day in Korea

The origins of Children’s Day in South Korea come from the 1920s. During that time, students wanted to draw attention to their situation to improve their status. One of the main supporters of the movement was children’s writer Dr. Bang Jeong-Hwan, who started using the word 어린이 (eorini) to mean children. Children’s Day was originally on May 1st, but as this coincided with Labor Day, it was moved to May 5th. The day became an official public holiday in the 1970s. Koreans have been enjoying a day off work on May 5th ever since.

Three days after Children’s Day, on May 8th, is Parents’ Day. However, this day is not a  South Korean national holiday. Traditionally, children give their parents carnations on parent’s day.

As a result, many convenience stores and shops will have special displays so that children can easily buy flowers or other small gifts for their parents.

The Korean word for Parent’s Day is 어버이날 (eobeoinal). The day was originally designated as “Mother’s Day,” but as there wasn’t a ‘”Father’s Day,” the two days were combined to make “Parent’s Day.”

Things to do on Children’s Day in Korea

As parents in Korea often don’t have much time to see their children due to overtime or working on the weekend, many families make an extra effort to do something special on Children’s Day.

Children’s Day in South Korea also falls in May, which usually means that the weather will be good for outside activities as it is warm but not too hot or humid.

Visiting an amusement park, or 놀이공원 (noligongwon) in Korean, is a popular activity on Children’s Day. Two of the most popular amusement parks in Korea are Lotteworld and Everland.

Everland is located in Yongin, near Seoul. You can reach it by taking the “Everline” monorail that connects the park to the Seoul subway network. However, it may be quicker to take an express bus to the park. Everland contains a zoo, a safari park, and many rides (놀이기구 | noligigu) and rollercoasters within its large grounds.

A trip to the zoo, or 동물원 (dongmulwon), is also a popular activity on Children’s Day in Korea. There are zoos in several South Korean cities. Seoul has two zoos: the main zoo at Seoul Grand Park (대공원 | Daegongwon) and a smaller zoo at Children’s Grand Park (어린이대공원 | Eorinidaegongwon), which is near Konguk University in northeast Seoul.

If you want to learn the different names of animals in Korean, then a trip to the zoo is a great way to practice these words. Quickly learn the names of the animals the night before, then you can practice the new vocabulary all day and make strong memories. Here are three animals to get you started:

Another popular activity is having a picnic or 소풍 (sopung). The parks along the Han River are likely to be full of families on Children’s Day. People will put up a small tent to rest in the shade and enjoy snacks while children fly kites or ride bikes. There are many convenience stores along the river to purchase snacks.

However, many people also order food and explain their location to the delivery men who ride on motorbikes looking for the person who placed the order.

As well as these common Children’s Day activities, there are many other things that you can do with your day off. You could go to a baseball or soccer game (there are K-League soccer matches on many national holidays, including Children’s Day), go hiking up a mountain, or take a one-day trip to the countryside. You could even stay home and intensively study other parts of Korean culture.

How will you spend your day off on Children’s Day? Let us know in the comments below!