Months in Korean – Complete List with Audio and Examples

Do you know how to say the various months in Korean? It’s really important when learning Korean!

In this lesson, we’ll explain how to say and write various months in Korean. Then we’ll also show you how to write specific dates and years, such as your date of birth that you can use when writing sentences.

This will be extremely valuable in learning Korean, so you can talk about things like when your favorite holiday is in South Korea, today’s date, as well as make plans on a future date with your Korean friends. You can combine these with the lessons on telling time in Korean and the Korean days of the week as well.

Below, we’ve got a detailed guide on how to put these months to use. Let’s get started learning the months of the year in Korean! 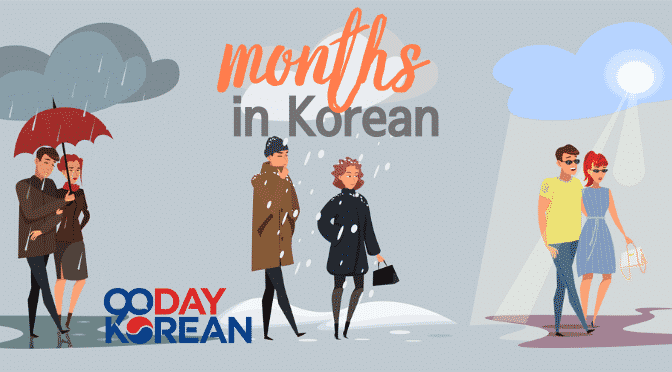 In this lesson, we’ll introduce you to all of the words in Hangeul (the Korean alphabet) with romanized English on the side for pronunciation help. We highly recommend learning the Korean alphabet. It will make it easier to learn new vocabulary words and pronounce them properly. This will also help if you’re planning on going to Korea or learning the language.

There are two main words for how to say “month” in Korean. The first word is 월 (wol) and the second word is 달 (dal). The two words ( 월 | wol and 달 | dal) have some differences in how they are used, which we will illustrate in the below examples further.


When do I use the Korean words 달 (dal) and 월 (wol) for months?
The word 월 (wol) is used for describing the date in Korean. 달 (dal), on the other hand, is used to count the months. You can also use it when you want to say something like “this month”, “last month” or “next month”.

Learning to differentiate between the two words for “month” in Korean is going to be quite easy, though. After all, one of the words, 월 (wol), is already attached to each and every month. In fact, as soon as you’ve learned to count in Korean, learning how to say the months of the year in Korean will be an easy task!

Why is that? Because all of the months are assigned a number based on the order of the month. This means months are expressed in Korean using Korean numbers.

Here is a table to illustrate:

If you have not yet learned the numbers in Korean, you can learn them here in this lesson. Learning the numbers will come in handy when you go to Korea or when learning the language.

Because each month goes by numbers, Koreans usually write each month in numeric form. For example, when writing March, you would write it as 3월 (samwol). January would be 1월 (irwol), February is 2월 (2wol), and July is 7월 (chirwol). The table below is how Koreans would usually write the months. The romanized Korean next to the months is there for a guide.

This will also be the way to write dates in Korean, which we’ll discuss in a bit.

How to Pronounce the Months

The months are pronounced a bit differently because of the special pronunciation rules in Korean. That’s mainly because the word for months (월 | wol) starts with a ㅇ. That means that the previous syllable’s bottom consonant might change up the pronunciation. For example, 6 월 (유월) and 10 월 (시월) for the months June and October.

Along with the audio, you can see the Hangeul pronunciation in the “Hangeul Pronunciation” column in brackets. Click the lesson audio below to hear how the months are pronounced and repeat them for practice.

You might have noticed that both June and October slightly differ from their designated numbers. That is because the words for six and ten, 육 (yuk) and 십 (sib) respectively, are difficult to pronounce naturally when combined with the word 월 (wol). Therefore, the last consonant has been dropped.

January in Korean is expressed as 일월 (irwol). This month is usually written as 1월 (irwol).

As you can see, it is written with the number 1 followed by the Korean word for “month” which is 월 (wol). Putting them together makes 1월 (irwol). This is because January is the first month of the year.

I will travel to Korea in January.

Valentine’s Day is in February.

Since the month of March is the third month of the year, March in Korean is called 삼월 (samwol). It is written as 3월 (samwol).

I watched the concert in March.

My mom’s birthday is in April.

May in Korean is expressed as 오월 (owol). It is written as 5월 (owol). This literally means “fifth month.”

Do you have any plans for May?

The month of June in Korean is expressed as 유월 (yuwol). It’s made up of the Sino-Korean number 6 which is read as 육 (yuk) and the word for months which is 월 (wol).

June in Korean is also included among those months that have special pronunciation. It’s expressed as 유월 (yuwol) and not 육월 (yukwol).

The month of June can be written as 6월.

We got married in June.

July is the seventh month. In Korean, it is expressed as 칠월 (chirwol). It is written as 7월 (chirwol).

The weather is hot in July.

August is the eighth month of the year. This is expressed in Korean as 팔월 (parwol). It is written as 8월 (parwol).

August is summer in Korea.

The month of October is the tenth month of the year so it’s called 십월 (siwol). This translates to “tenth month.” However, its pronunciation is 시월 (siwol) and not 십월 (sipwol).

This month is usually written as 10월 (siwol).

In October, there will be a movie festival in Busan.

How to Say How Many Months in Korean

When talking about months, it’s quite common to ask the question “how many months”. You can say this question as 몇 개월 or 몇 개월이에요. The difference between the two is the level of politeness.

How to say  a number of months in Korean

Talking about a period or number of months in Korean can be expressed as:

The numbers in the examples above are read using the Sino-Korean numbers. You can read and say them as:

When writing this using the Arabic numerals, they can be written with or without space. However, writing it with no space is more common.

Another way of expressing a period or number of months in Korean is the use of the native Korean numbers and the word native Korean word 달 (dal).

The rule for spacing when using the native Korean numbers and the 달 (dal) is that you need to put a space between the number and 달 (dal).

However, both with or without spacing are allowed when using the numbers such as in the examples below.

How to Write Dates in Korean

As you learn Korean, you might be asking how dates are written in Korean. For the next part of this lesson, let go over how to write full dates. That will allow you to add in the days and years as well. You can write it using this format:

Usually, the year is a 4 digit number, but you may see it written a 2 digit number as well.

Let’s use one of the BTS members’ age for an example. Jungkook’s birthday is on September 1st. He was born on September 1, 1997. We can write it as:

Fun fact: Do you know how old Jungkook from BTS is in Korean age? Here’s how to find out.

Examples of Dates in Korean

Time for practice for what we learned. Write the dates below in Korean using both numbers and words. Use the new vocabulary you learned above for 월 (wol) and 일 (il).  Then scroll down to check your answers.

Use these sample sentences as a guide to how to make Korean sentences using months and dates. Additionally, you can mix it up by substituting days of the week in Korean. These are great examples for assisting with learning Korean grammar, such as particles and markers.

My birthday is on April 7

I came to Korea eight months ago

The word “date” is expressed as 날짜 (naljja). Below are examples of how you’ll use it:

What is the date today?

When is the date we promised?

The word “calendar” in Korean can be expressed in two ways.

The first way is 달력 (dallyeok). This word is used for talking about the calendar we use for checking the dates.

There’s a calendar on the table.

The second way is 일정표 (iljeongpyo). This word can be used when referring to a calendar of events, schedule, or itinerary.

Please mark the date of the meeting on the schedule (calendar).

There are 2 Korean words used for “year”. You can use 해 (hae) and 년 (nyeon). 해 (hae) is a native Korean word for year while 년 (nyeon) is a Sino-Korean word.

You’ll use the word 해 (hae) for native Korean words such as the following:

On the other hand, you’ll use 년 (nyeon) with Sino-Korean words. For example:

Congratulations! You have completed this lesson and successfully learned all the months of the year in Korean. You should now be able to read and write dates. That will help you with understanding Korean culture, as well as what happens in Korean films and series.

After this lesson, you also know the difference between the two words for “month” in Korean. Try writing your favorite date or month in Korean below in the comments, and let us know why that date is important to you.